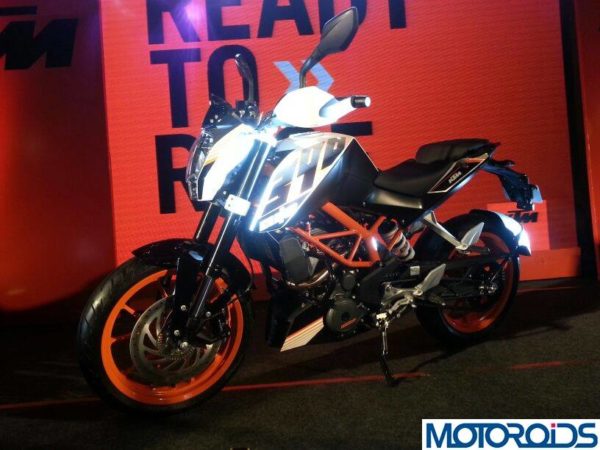 The entire country has been busy talking about the KTM 390 Duke, which was launched earlier today. The new 375cc variant in KTM Duke range has been launched in India with a mind blowing price tag! The new bike has been launched at an introductory price of INR 1.8 lakhs (ex showroom, Pune)!! Don’t tell us that it didn’t blow your mind.
Such a fantastic price tag is due to the high amount of content sharing between the 200 and the 390 Duke.
Components sharing between the 390 and the 200 Duke

All this means that the Austrian bike maker hasn’t invested a really big sum to make the leap from 200 Duke to 390 Duke.

The much awaited 375cc variant of the KTM Duke is looking all set to kickstart a totally new segment of the 250-400cc performance bike market in India.

(Check out the full technical specs in next page).

Our counterparts in the West have already told us that the bike has a great handling package, which along with a powerful engine, makes the bike quite a pocket rocket.

Further helping the bike in having great handling characteristics are Metzeler soft compound tires, which should help you with always keeping the rubber side of the bike on the road.

Visually, the KTM 390 Duke is almost identical to the 125cc and 200cc variants. The only changes are usage of KTM Orange paint for the trellis frame and alloy wheels. The bike also gets different decals.

We all knew that the 390 Duke would be very well priced. However, what we didn’t see coming our way was a price tag that would be more exciting than winning a lifetime supply of Redbull.

Go to next page for KTM 390 Duke pics