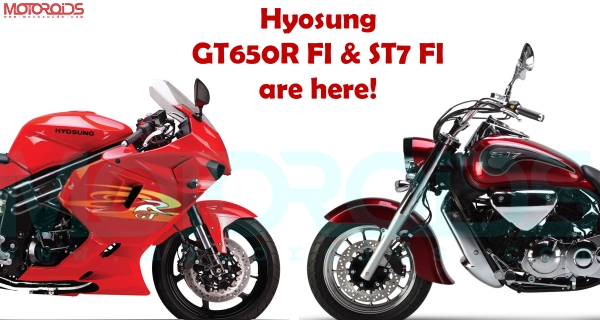 We did tell you the news months back about Hyosung joining hands with the Pune based Garware Motor Company. Now we have an official word from the M.D. of Garware Motors Ibanez that they have indeed partnered with the Korean bike company. Hyosung has decided to invest a sum of 20 crore for their assembly plant at Wai in Satara (Maharashtra) which will produce around 8-10 bikes every day. In this partnership Hyosung will deal with the technical aspects while Garware Motors will deal with the assembly, services & after sales.

The company will launch the GT650R and the ST7 which is a 700cc cruiser planning to price them from Rs 5.5 lakh upwards and targets around 2000 sales in first year with deliveries expected from mid-April.

What is worth looking out for is the response of the crowd after the failed tie up with Kinetic, not forgetting the scary after sales and support which was nowhere to be seen. Plus Hyosung is not a big player in the game, teaming up with a relatively weak player like Garware Motors it might turn out to be another Kinetic-Hyosung. Kinetic-Hyosung had a fair chance then because Suzuki, Honda, Yamaha and Harleys were absent with high-end bikes in the Official market. One thing that we notice is even today enthusiasts are willing to buy a second hand mint condition Aquila or Comet. So will this new team change the game?