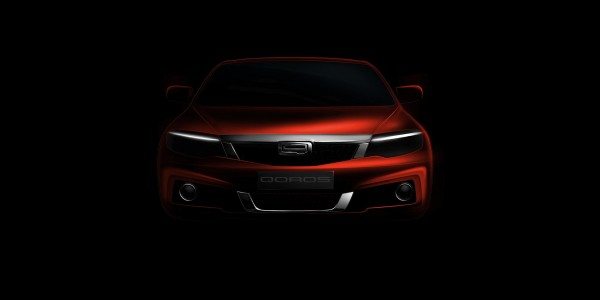 The second Qoros production model will have its public debut at the 84th Geneva Motor Show in March 2014.

The teaser pic that you see here reveals that the upcoming car’s front fascia would share plenty of design cues with that of the Qoros 3 Sedan.

The manufacturer says that the upcoming model has been designed to appeal to the young, modern, ‘always connected’ metropolitan customer, with state-of-the-art features including the innovative QorosQloud infotainment system accessed via an eight-inch touchscreen.

The second Qoros model will go on sale in China in mid 2014. The second member of the Qoros family is based on the same modular platform as the Qoros 3 Sedan, which made its world premiere at the 2013 Geneva and Shanghai Motor Shows. The Qoros 3 has been winning plenty of accolades for its elegant design, refined driving experience, and European standards of quality. In September, it became the first car developed in China to be awarded five stars in Euro NCAP crash tests.

Qoros plans to expand its line-up steadily over the next few years.

Stay tuned to Motoroids for more updates on the second Qoros production model.