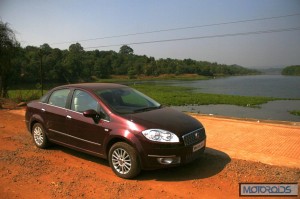 We reported in detail when it emerged that Fiat India is close to reintroducing the Linea T Jet to Indian car market. It may be noted that the Linea TJet, which once used to be the performance variant of the Linea upper C segment sedan, was taken off the shelves owing to the reduced demand.

While it was being expected that the car is hardly a few days away from its launch, it has now emerged that the car won’t enter the Indian car market before June 2013.

The Fiat Linea T-jet is looking all set to again become the least priced turbocharged petrol sedan in the country. Powering the Fiat Linea T-Jet is a 1.4 litres, 4 cylinder, direct injection, turbocharged T-Jet petrol engine that has a max power output of 114PS @ 5000 rpm and has a peak torque figure of 207Nm @ 2200 rpm. The Linea comes with bigger 16-inch wheels that wear wider 205/55 spec tyres. The T-Jet has disc brakes on all four wheels.

Stay tuned to Motoroids.com for price and other details.