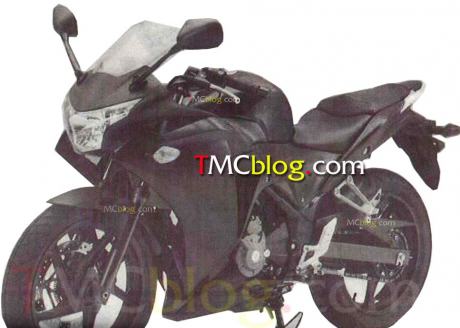 Apart from the CBR150R pictures (with specs and other details) that we showed you earlier, the pictures and details of the soon to be released CBR 250R have also been spilled on the internet. The pictures were published by a European newspaper. We are not sure whether this exact same bike will make it to the Thai or Indian market, but it’s set to make its debut in the European market for sure and give the Ninja 250R a good run for its money. very honstly, after this revelation, we cannot be sure whether the smaller CBR150R or this one is coming to India. But something is cooking at HMSI for sure, as is told to us by some of our insider friends.

The engine specs, going by the picture and details carried along with the article point at a 249cc single cylinder water cooled engine capable of dishing out a yummy 33bhp of power and weighing 140kg. The newspaper that has published the pictures assumes that the bike will sell for GBP 4000 in the UK which is equivalent to around 2.7 lakh Indian rupees. Going by that price, the new bike isn’t going to be substantially cheaper than its head-on competitor the Kawasaki Ninja 250R if and when it arrives in India.

The bikes, just like the CBR150R we talked about earlier during the day draws heavily from the VFR1200F for its design. The front end employs telescopic forks while the suspension duties at the rear are undertaken by a monoshock. There are discs both at the front and at the rear. Interestingly, there is an additional ring forming an inner circle within the front disc brake – it’s used to measure the wheel rotation speed while applying ABS. We can be sure that the new bike will feature ABS.

The new CBR250R just like the CBR150R features a split seat, which seems rather usable by a pillion rider. The seating position will be racy with rear-sets positioned rather behind.

Now since we have seen the pictures of this new bike as well, we cannot be sure whether it’s the 150 or the 250 CBR that Honda plans to launch in India. One thing is for sure though, they have something exciting up their sleeves, as is evident from the murmurs we have heard from our sources. Watch this space out, as we go all out and try and bring some more detailed information about the CBR150R and CBR250R – the two hottest bikes from the Honda stable which great significance for India.