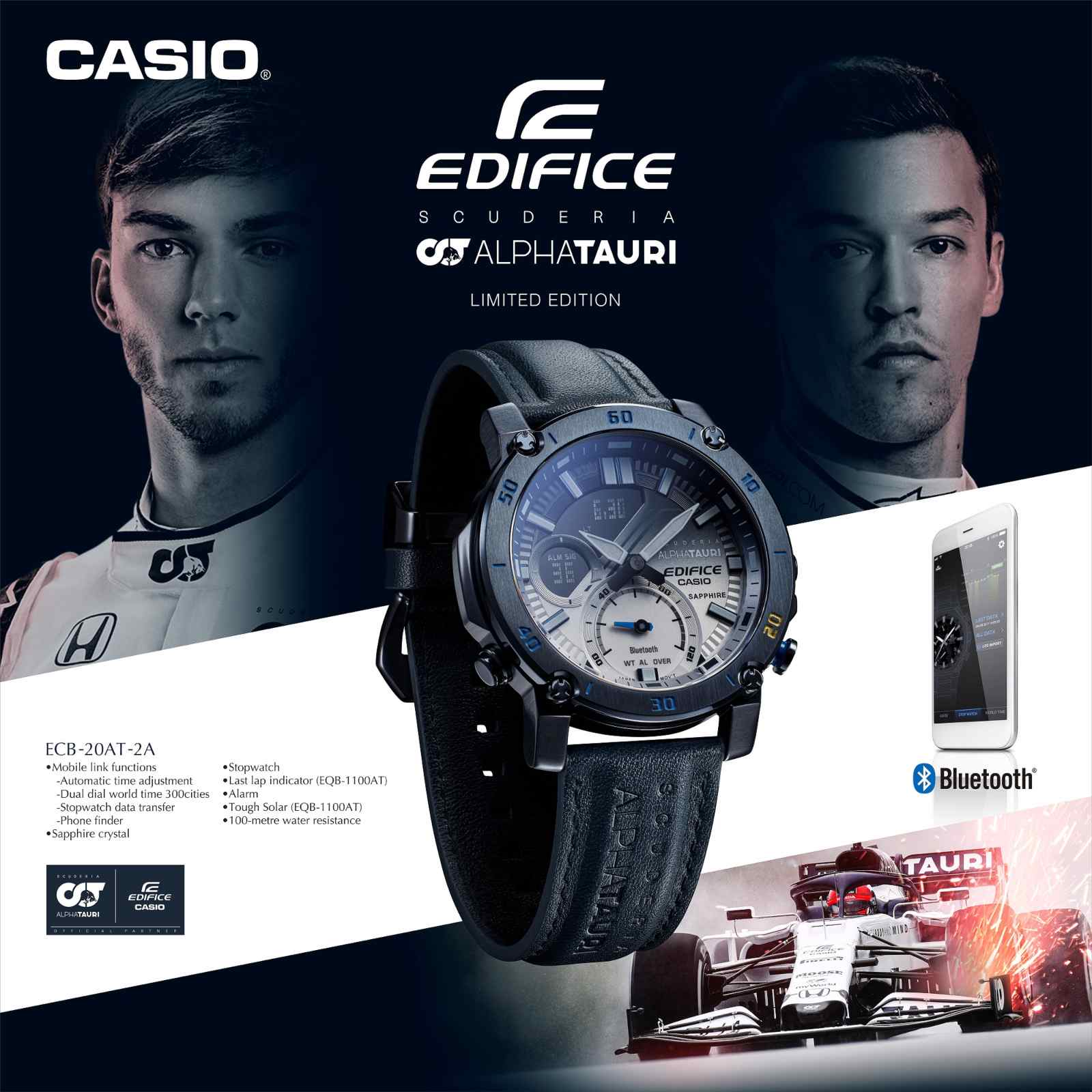 Casio India has launched the new Edifice line of high-performance metal chronographs in collaboration with Scuderia AlphaTauri Formula One team, the winner of the 2020 Italian GP. The limited-edition watch ECB-20AT is a mix of technological innovation and the pursuit of the speed of both Edifice and Formula One circuit, according to the brand. Casio has been an official partner of the Scuderia Alphatauri Formula One team since 2016, then Scuderia Toro Rosso.

The ECB-20AT collaboration model is the first since the team changed its name from Scuderia Toro Rosso. Navy-blue case and band, inscribed with the team logo on the dial, case back, and band, part of a design infused with the world view of Scuderia AlphaTauri, is made to look good on the sporty men out there. 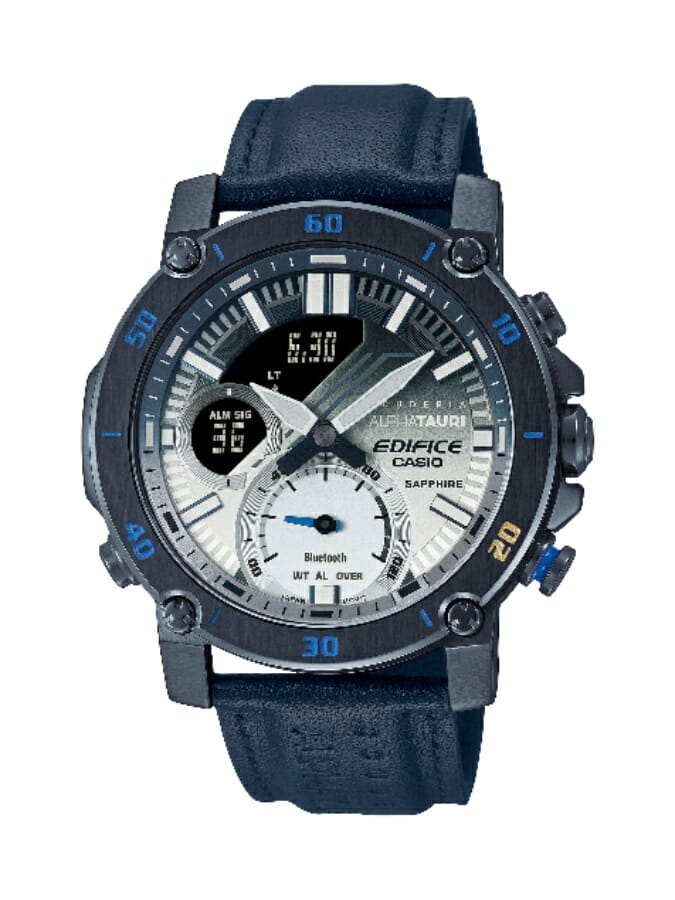 The ECB-20AT is based on ECB-20 model and is equipped with a Schedule Timer and leather band inscribed with the team logo. The face is made of scratch-resistant sapphire crystal, tough enough for team mechanics to use in the paddock and pits. The watch also automatically adjusts the time when paired with a smartphone using a dedicated app. ECB-20AT is a companion of team members who travel around the world.

Talking about Scuderia Alphatauri, they are an Italian team which were rebranded as Alphatauri in 2020. Earlier, they were known as Scuderia Toro Rosso, born out of the Minardi team. Since being branded as Toro Rosso, they serve as a launchpad for young drivers under the Red Bull junior program to climb their way into the senior team. Scuderia Alphatauri F1 pilots were Frenchman Pierre Gasly and Russian Daniil Kyvat. Pierre has retained his seat for 2021 but the team has replaced Kyvat and has signed the young Japanese sensation Yuki Tsunoda for the 2021 season. 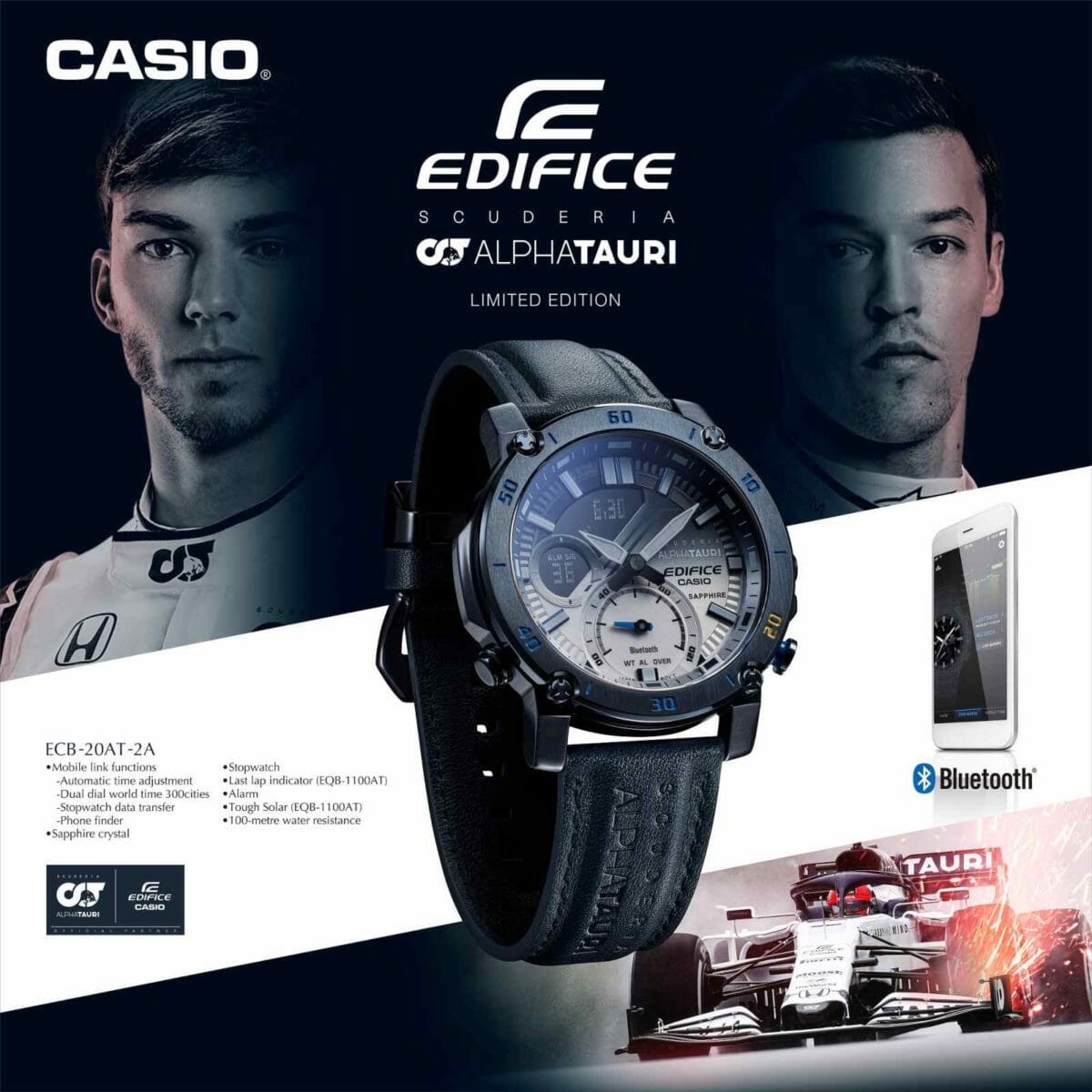 Toro Rossa/Alphatauri claimed their first victory in 2008 on a wet Monza circuit in front of their home fans, driven by a then 21-year old, future 4-time world champion, Sebastian Vettel. He secured pole and won the race the next day in treacherous conditions in a fairytale race for the home team.

They secured their second victory last year on the same track, this time the young Frenchman Pierre Gasly behind the wheel in the cockpit. A rare mistake from Mercedes handed Pierre the lead of the grand prix which he wouldn’t relinquish and held off the charging McLaren of Carlos Sainz Jr to script another fairytale victory after 12 years.

Looking for some interesting sporty watches. Visit our “One Stop Shop“