The Bajaj Pulsar 220 is quite a motorcycle but with its clip-on handlebars, and relatively backset footrests and an aerodynamic fairing, it is a road focused product with very limited off-roading prowess. But someone from Indonesia decided to change that by giving his Pulsar 220 a complete overhaul and turning it into a supermoto. The end result is a fantastic supermoto motorcycle that looks nowhere close to the donor vehicle, and packs loads off-roading capabilities.

The only parts carried forward from the donor motorcycle are the frame (although with some tweaks) and the engine while everything else is either sourced from existing supermoto products in the market, or custom built for the project. The wheels, tyres and suspension, for example, are sourced from Kawasaki KLX 150. The Kawasaki sourced units were customised to fit the Pulsar 220’s frame. 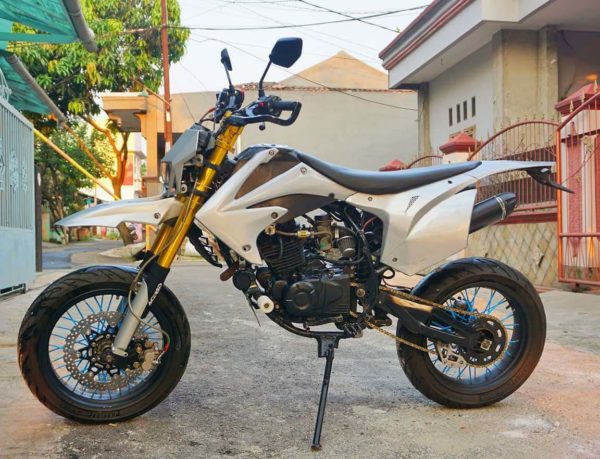 The body panels, which borrow styling cues from the Honda CRF250R, were custom built for the Bajaj Pulsar 220, thus giving the motorcycle a typical supermoto persona. All the body parts are made from iron plates. Other features include K&N filter, knuckle guards, off-road spec footpegs, narrow saddle and tall-set exhaust.

Mechanical specifications are scarce and thus we’d assume that the motorcycle continues with the same performance as the stock Bajaj Pulsar 220. Check out the motorcycle in detail, and hear the exhaust sound in the video below: