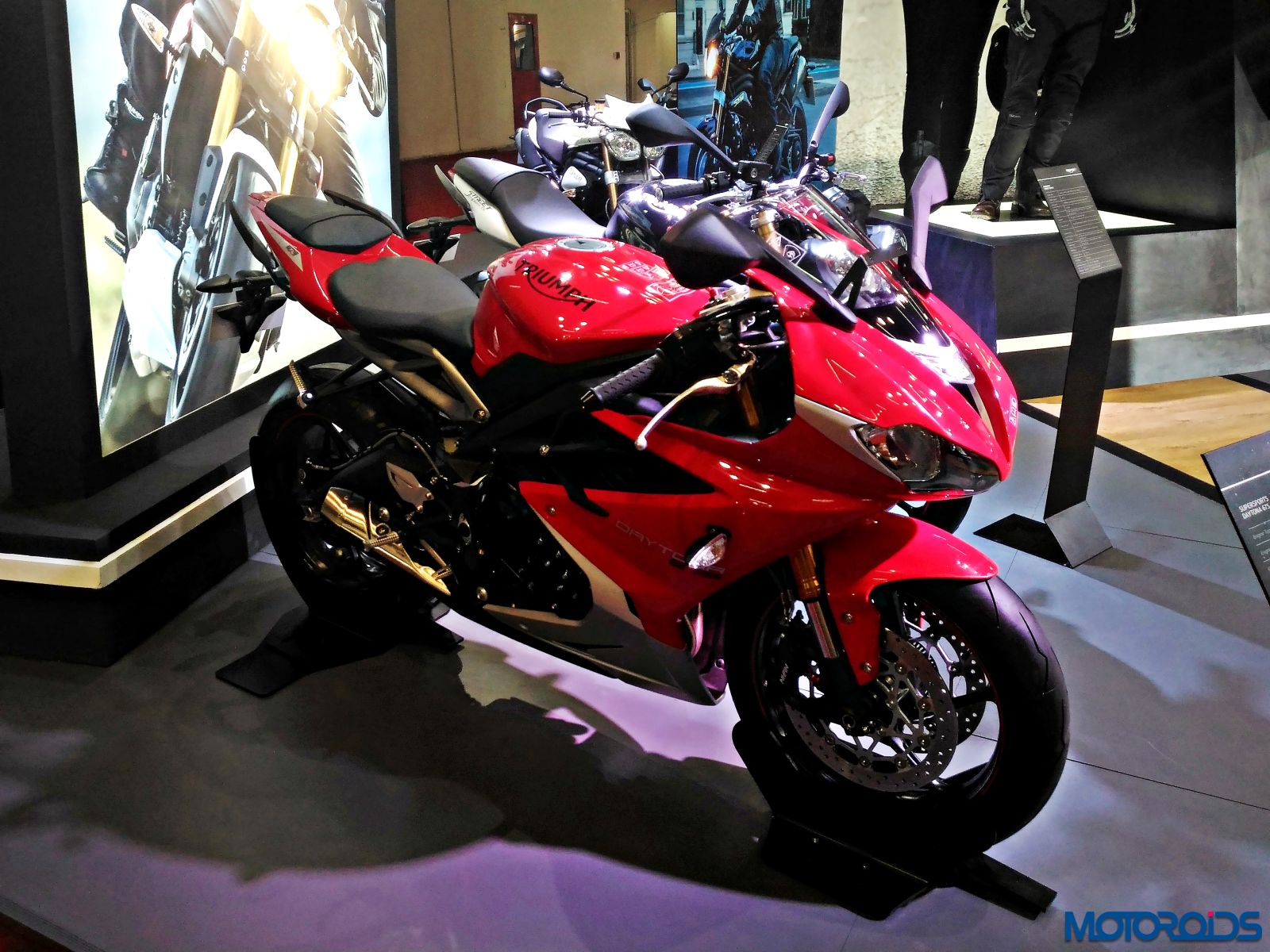 The Auto Expo 2016 witnessed some interesting unveils but very few launches. Triumph Motorcycles India was one of the few manufacturers who unveiled three new Bonneville motorcycles, two of which were launched at the motoring event with the remaining model promised to be heading to the showrooms very soon. You can read all about the launch report here. Since Triumph’s Pavilion didn’t have any new products apart from the new Bonneville range, a report on which has already been done elsewhere on Motoroids, we do a round up of all Triumph Motorcycles India products displayed at the 2016 Auto Expo in this single post itself. 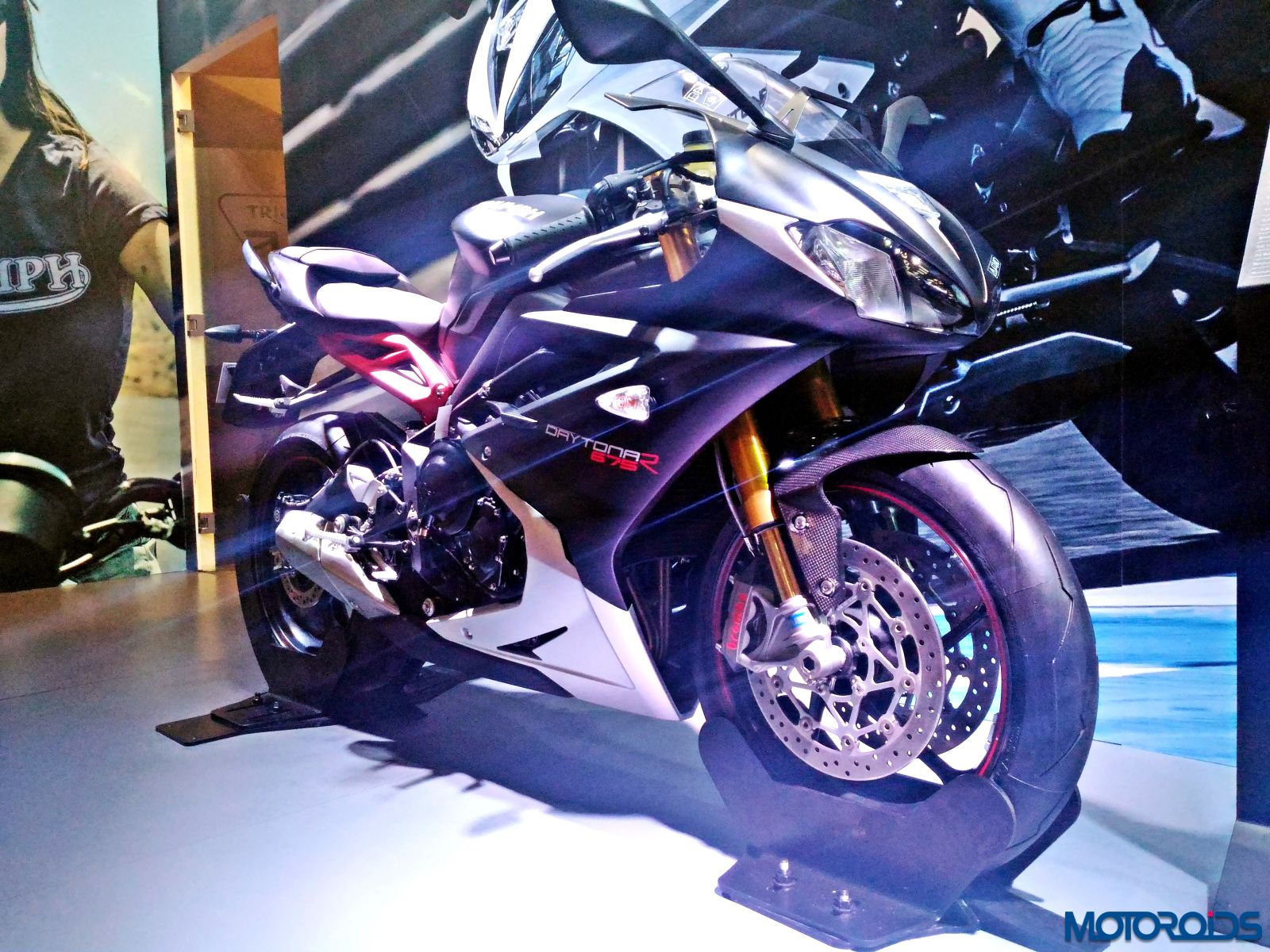 The Triumph Motorcycles India arsenal at the 2016 Auto Expo had two fully faired motorcycles, the Daytona 675 and its fully loaded avatar with all the bells and whistles, the 675 R. The two motorcycles represent Triumph Motorcycles in the middle-weight performance motorcycle segment and are considered to be some of the finest products in the 600-800cc segment. Powering the Daytona 675 is a 675cc triple cylinder engine with a peak power output of 131PS @ 12500 rpm and peak torque rated at 74NM @ 11900 rpm. 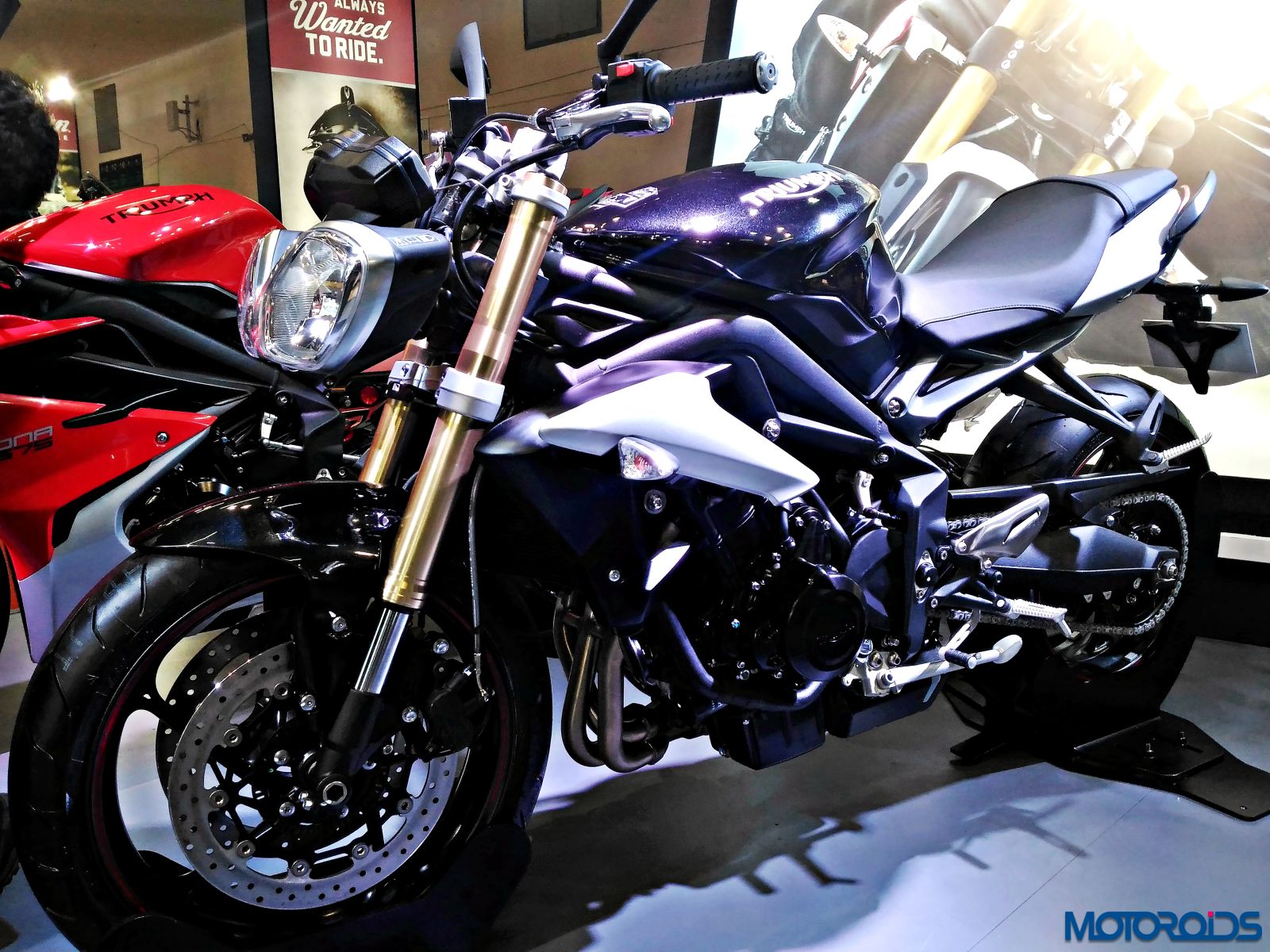 The middle-weight streetfighter from Triumph Motorcycle’s stable is the naked version of the Daytona motorcycle. The Street Triple has been one of the best selling models for Triumph and is an absolute treat to ride, in city as well as on open stretches of tarmac. Triumph Street Triple is powered by a 675cc inline three cylinder engine with power and torque figures of 106 PS @ 11850 rpm and 68 nm @ 9750 rpm respectively. The India spec model, however, comes with a slight de-tuned engine to comply with the local norms. 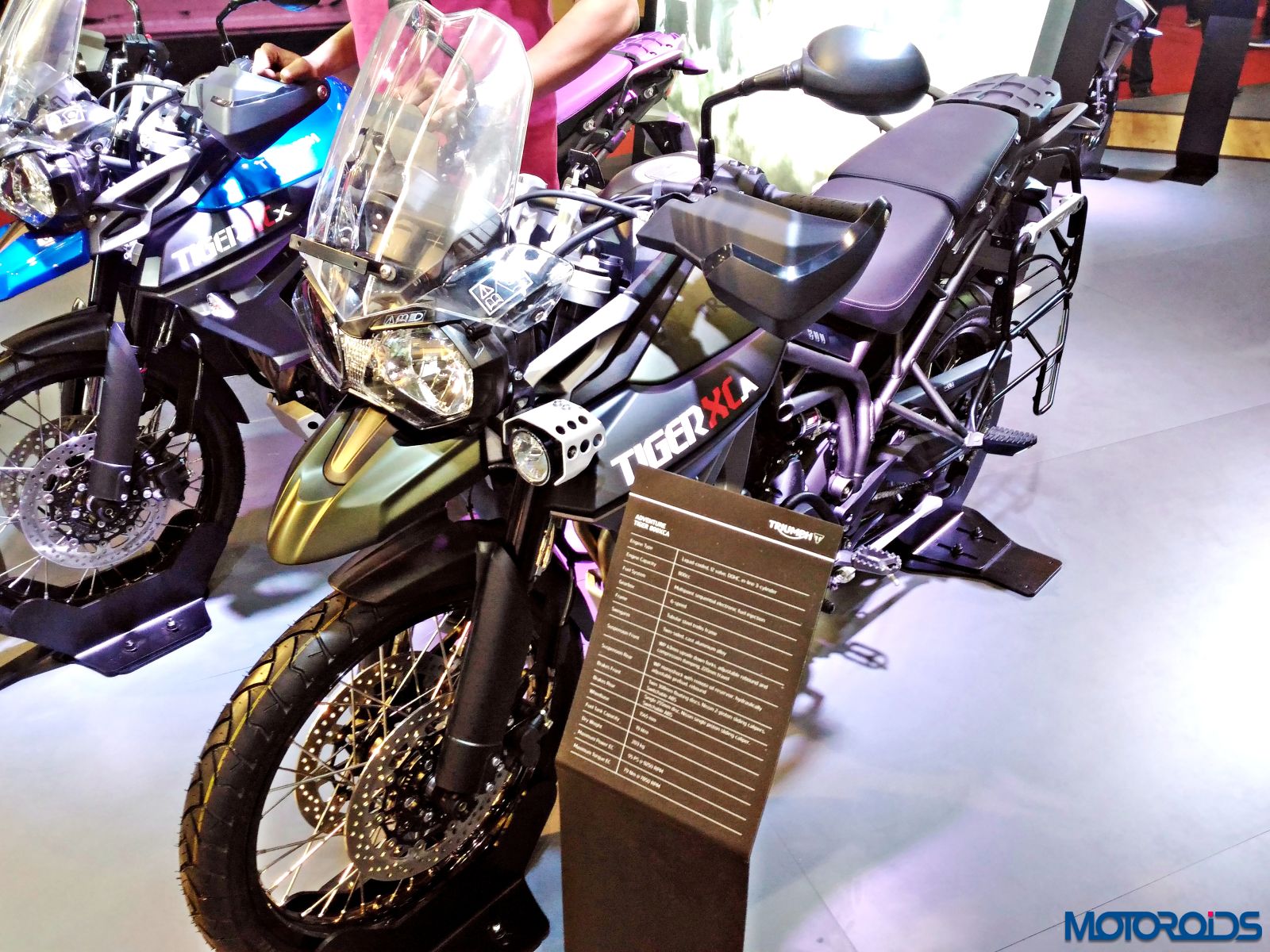 The tiger belongs to the jungle and so does Triumph Motorcycle’s Tiger range of touring motorcycles. Triumph Motorcycle’s Tiger portfolio ranges from 800cc to 1200cc and is one of the best adventure tourers out there in the market. The middleweight 800cc liquid cooled in-line three cylinder motor that is seen on the Tiger delivers 95PS of power and 79Nm of torque. The 1215cc inline three-cylinder engine on the other hand pumps out 121Nm of torque and 137PS peak power. 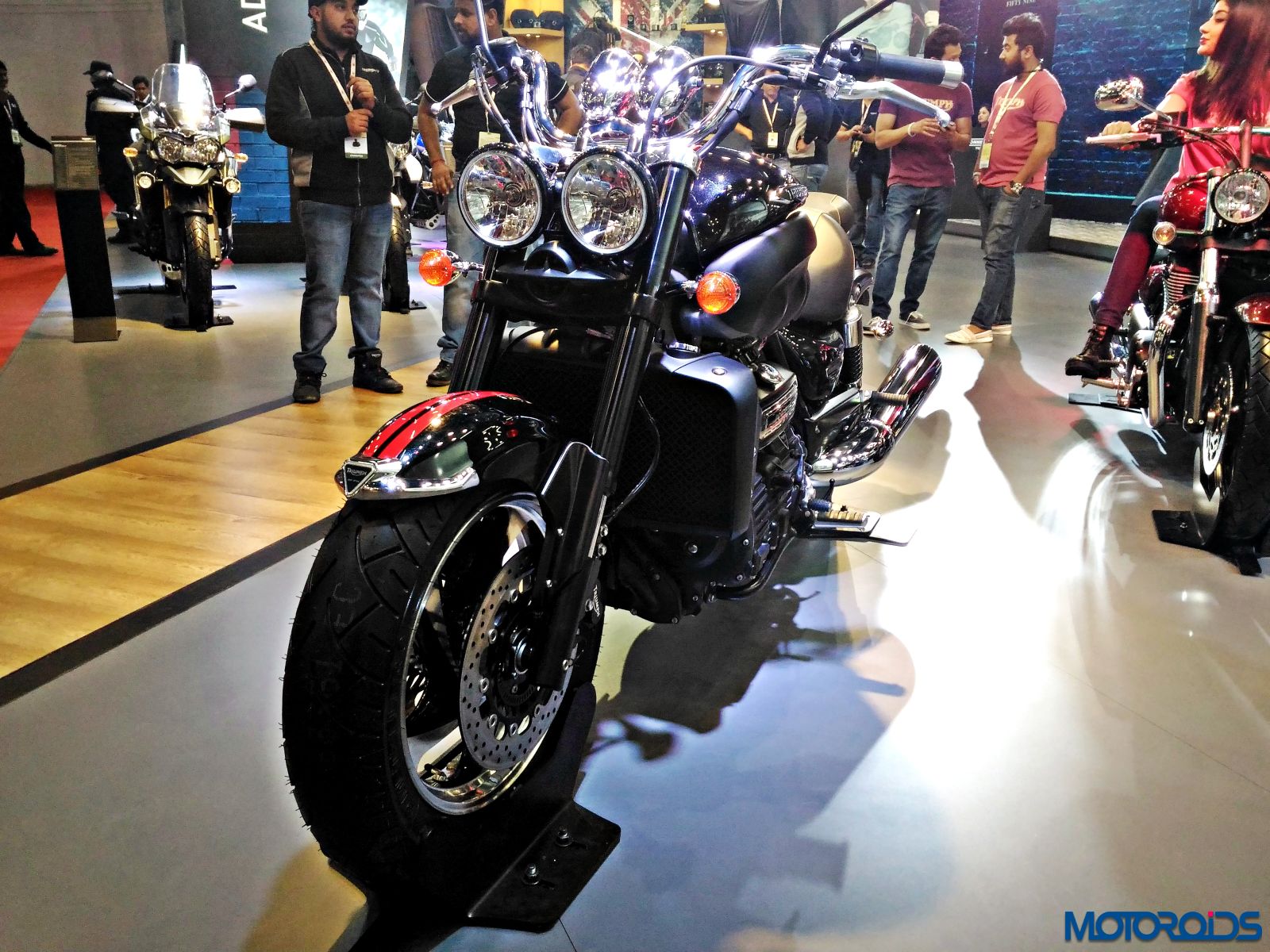 The more leisurely rides from Triumph’s stable were also present at the motoring event. The Thunderbird Storm, Thunderbird LT and the mighty powerful Rocket III drew attention of the visitors who prefer cruiser motorcycling. The Thunderbird draws power from a 1699cc Liquid-cooled, DOHC, Parallel-twin, 270º firing interval while the Rocket III gets a 2294cc Liquid-cooled, DOHC, in-line 3-cylinder motor that is world’s biggest production motorcycle engine. The motor on the Rocket III delivers 148 PS of power and a collosal 221 Nm of torque which kicks in at as low as 2,750 rpm. 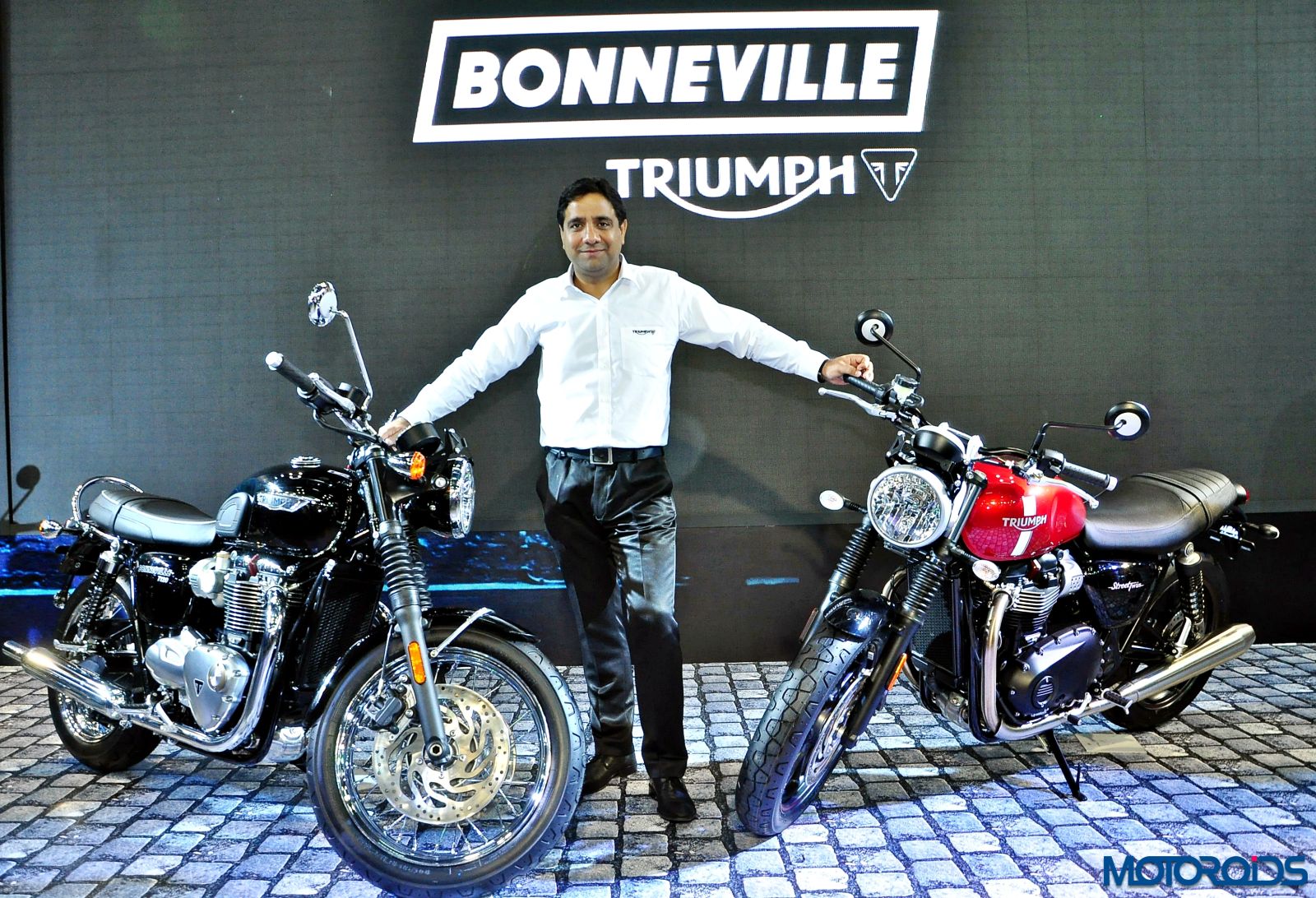 Triumph India extended its product line up with the launch of three new Bonneville series motorcycles. The motorcycles launched for the Indian market are the new Street Twin and Bonneville T120 while the Thruxton R was showcased and will be introduced very soon. 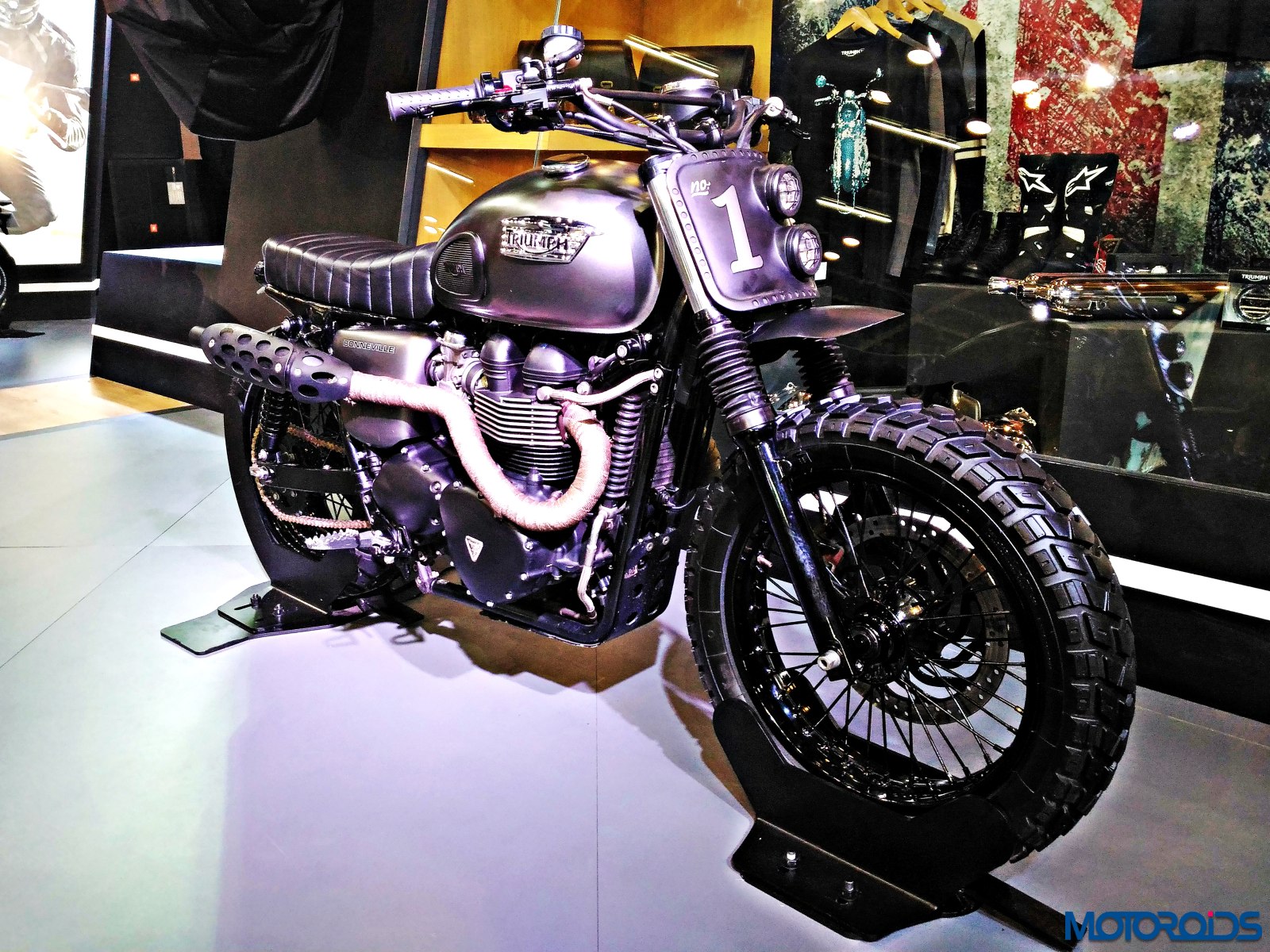 Apart from the new Bonneville range, Triumph Motorcycles also showcased the Rajputana Customs made one-off Bonneville Scrambler at the motoring event. Jaipur-based Rajputana Custom took a previous gen Bonneville, and created their own interpretation of a scrambler It did turn out pretty splendid, didn’t it? 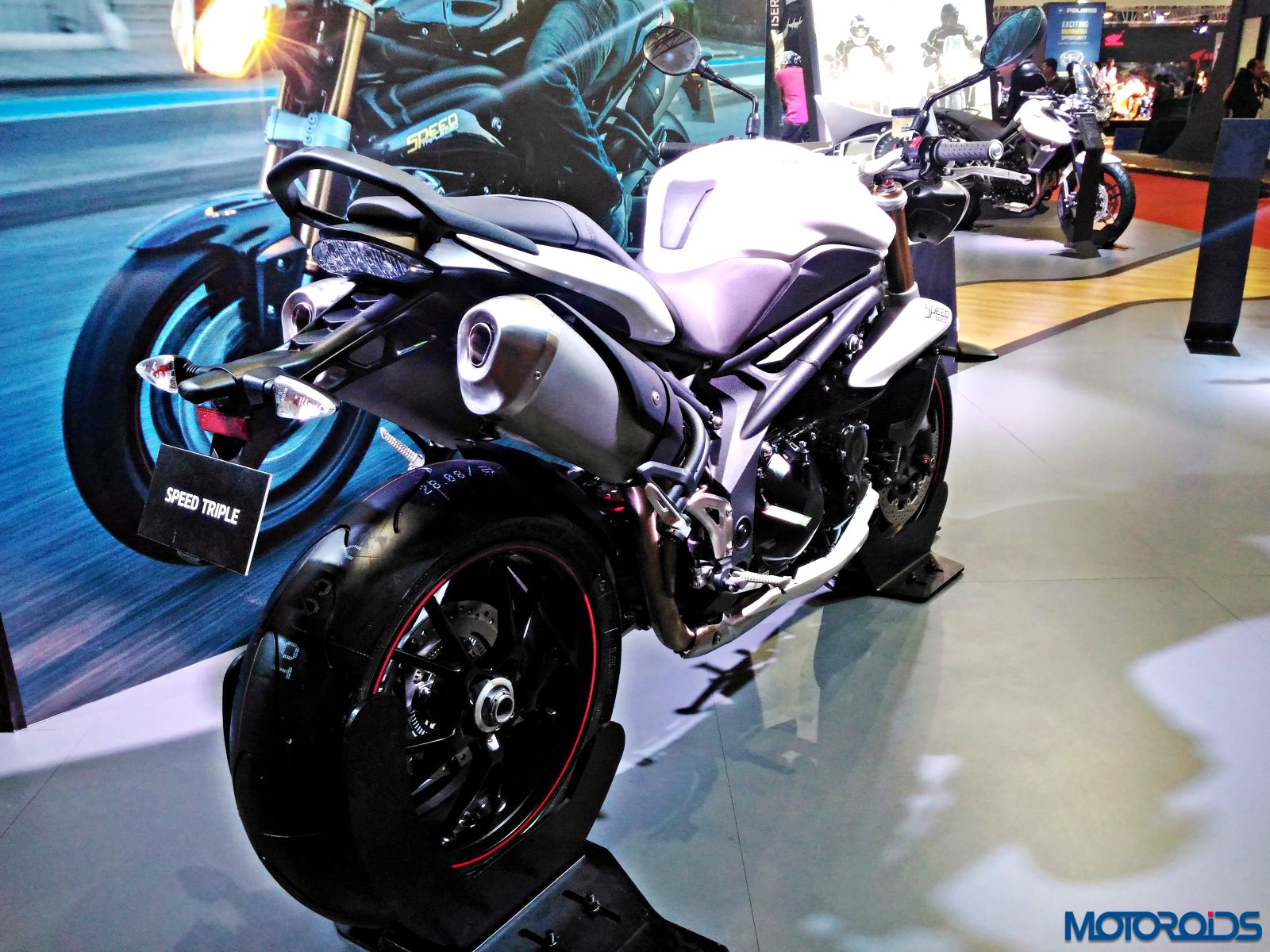 The litre-class streetfighter from Triumph, the Street Triple, was also seen at the 2016 Auto Expo. This 1050cc performance roadster is the new flagship of the Triumph triple-engine roadster range. The new engine configuration on the Speed Triple features 104 new developments and generates 140hp of power and 112Nm of torque.

Here is the complete image gallery of Triumph Motorcycles’ pavilion at the 2016 Auto Expo.