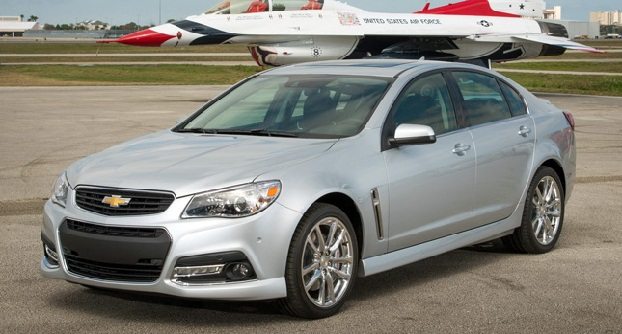 While the recently unveiled 2014 Chevrolet SS might not be the most powerful executive sedan out there, the new car is a welcome addition to Chevrolet’s line up of production spec cars and will also compete in the Daytona 500 NASCAR races.

The new Chevrolet SS is basically a US-spec version of the Holden SS V that is underpinned by GM’s global platform. The same platform also underpins the Camaro sportscar and the Caprice Police Patrol Vehicle.

The 2014 Chevrolet SS marks the return of Chevrolet to rear-wheel drive performance sedan segment after a long duration. Mark Reuss, GM North America president commented: “The Chevrolet brand was largely built on the strength of rear-drive performance sedans, yet it’s been 17 years since we offered one”, he said. “The all-new SS fills that void and fills it better than any other vehicle in the brand’s rich history.”

The suspension duties in the SS are performed by McPherson struts up front and a trapezoidal multilink arrangement at the rear. The car sports an electronic power steering setup and rides on forged 19-inch alloy wheels that wear 245/40 spec rubber at front and 275/35 spec rubber at rear. Braking power is courtesy 335-mm Brembo discs with two-piece, four-piston calipers at the front.

Powering the 2014 SS is a 6.2-litre V8 motor that has max power output of 415HP and a peak torque figure of 562 Nm. Power is sent to rear wheels thru a six-speed automatic transmission. The car has a claimed 0-96 kmph figure of “about” 5.0 seconds and it isn’t yet known if the carmaker plans to launch a manual gearbox option.

Chevrolet says that an almost 50/50 front/rear weight distribution and a low center of gravity endows its new RWD sports sedan with good road manners and such is the suspension setup that the car can be used both for spirited driving and for daily use.

“The perfect weight balance and lower center of gravity were a big part of that goal because they enabled the team to tune for a more comfortable highway ride without sacrificing handling or driver confidence while cornering at the limits”, said executive engineer of GM global programs David leone.

The 2014 Chevrolet SS will go on sale in the last quarter of 2013 and prices haven’t been announced yet. The car comes loaded with features like eight-way power adjustable front bucket seats, leather upholstery, a center-console mounted touch screen for the MyLink and navigation systems, a Bose nine-speaker audio system, a color head-up display (HUD) and push-button start.