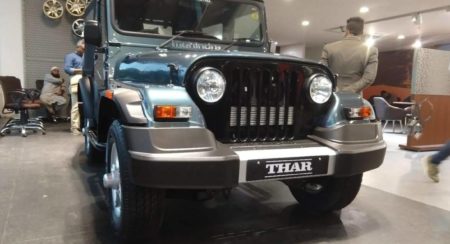 Mahindra Thar is well-known player in the off-road SUV family. The car has a practical design, powerful engine, and go-anywhere attitude for the people who like to take it to extreme levels. Before it is replaced by the new generation model, Mahindra has introduced a limited 700 edition model.

The Thar carries a rather basic design shell. Looking like a typical SUV, the Thar comes across as a basic looking car. The SUV adorns a boxy shape, with large wheels arches and fender flares. The front end gets a blacked-out bumper, with a space to mount a winch. The car also gets a canvas roof, which can be removed easily and the windshield can be folded down as well.

This off-roader has a minimalistic designed dash, the dated fit of the air conditioner, traditional elements such as a heater, AC and blower, finished with a simple instrument console keep up with the simplistic appeal. The front row comes with two individual seats and the rear compartment has two benches placed opposite to each other.

The limited-edition comes with airbags and ABS as standard and that is about it. Due to this safety concern and upcoming norms, the company has been forced to retire this model and create a new one.

Mahindra will feature new BS-6 compliant engines with the revamped Thar line-up. Currently, the Thar 700 has two engine variants, a 2.5-litre CRDe engine pumping 105 horses and a peak torque of 274Nm this engine is mated with a 5-speed manual transmission with a low range gearbox.  The 3-door car is practical and focuses more on comfort as it will be out on the bumpy roads more often.