Home KTM Video Review of the KTM RC390 by Motorcycle.com 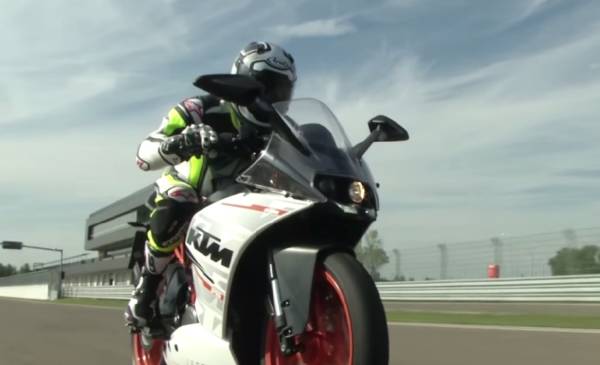 The KTM RC 390 and RC 200 will be launched at an event in Pune tomorrow. Both the motorcycles are faired iterations of their naked cousins which have been on sale for some time now. The RC series will appeal to those who like their motorcycles to be aerodynamic and indulge in track days. Both the bikes will be mechanically identical to the Duke twins, although minor changes have been made to the steering angle to make it more sharper.

The KTM RC390 is powered by a water-cooled, four-stroke, single-cylinder 373.2cc engine that pumps out 43.5 PS of power and 35 Nm of peak torque. The bike gets a 6-speed manual transmission and shares almost all its mechanical components with its naked sibling, the Duke 390. However, the fairing adds an additional weight of 8 kgs which might make it slower off the block in comparison to the Duke, but the aerodynamics and taller gearing should see it catch up eventually and post a higher top speed. The RC390 gets dual projector headlamps with DRL’s, clip-on’s and split seats.

Although pricing will be announced tomorrow, the motorcycle was revealed internationally at an event in Modena, Italy and the good folks at Motorcycle.com have posted a video review of the RC 390 after testing it on track and on the road. Enjoy!