There are many, really fast motorcycles out there, the fastest of which can easily blast past you at over 350 km/h (218 mph). That’s pretty brisk if you ask us. However, for those searching for the holy grail of high speed motoring, no place on earth can come close to the Bonneville Salt Flats in Utah. Those lucky and ballsy enough to go flat out on their speed machines over there truly deserve a pat on the back from almighty. One such gentleman is a 50-year-old Richard Brown, an engineer from Oxford. 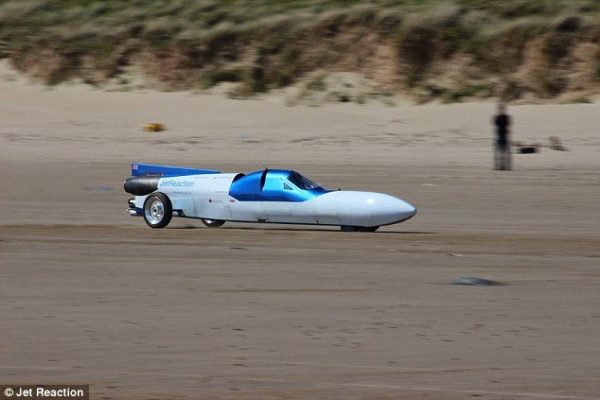 The Jet Reaction is the brainchild of Richard Brown and he is also the designated rider/pilot of this earth-borne missile. The current world record for the fastest two-wheeled bike is 605.697 km/h (376.363 mph) and was set by Rocky Robinson in 2010. His bike had 2598cc and 1000 horsepower to play with, the result of combining two Suzuki Hayabusa engines together with a turbocharger. The £100,000 (INR 1 crore) Jet Reaction on the other hand, has a screeching 1200hp turbojet engine from a helicopter to generate sheer thrust. For safety reasons (uneven surface), Jet Attack had three wheels whilst undergoing initial test runs in Wales, United Kingdom. However, the velocity that this ‘bike’ can achieve is truly phenomenal – claimed top speed is 725 km/h (450 mph)! Jet Reaction measures 20 feet in length and weighs 560 kg. 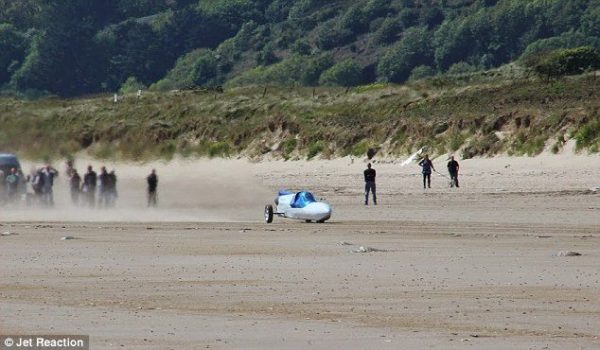 Robinson’s five year old record at Utah still stands strong, for now. But Brown and his team are hard at work and are aiming high. Obviously, Brown couldn’t exactly stretch the legs of his creation on a beach, but it won’t be long before he shows his creation the vast expanse of the Bonneville Salt Flats. With the help of his team and some major planning, Brown is aiming to take down the current record set by Robinson once and for all. The planned high speed run is slated to happen somewhere later in 2015 at the fabled Salt Flats. Brown is hoping to touch at least 640 km/h (400 mph) for his ambitious run at Utah and that will be done on just two wheels on the ultra-flat Bonneville surface. 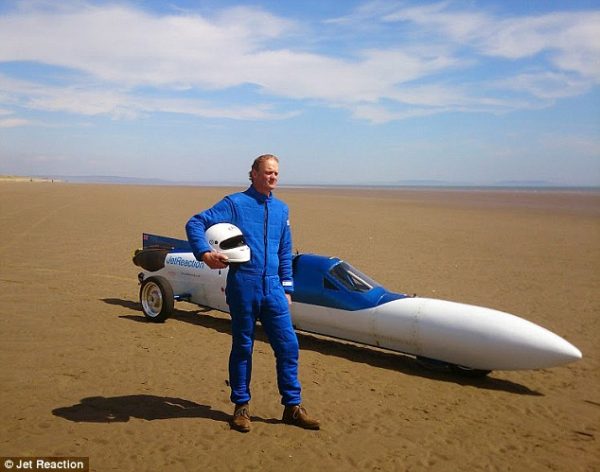 The ‘bike’ is comprised of a central chassis and wears an aerodynamic shell, thus allowing Jet Reaction to achieve such high speeds. At slower speeds, the bike will be kept in balance by two stabiliser wheels, one on each side. As the velocity increases, these wheels will be retracted. To nab that elusive world speed record, Brown will have to make two runs over a distance of 12 km (8 mi) within an hour’s time of each.

Anyway, tell us what you think about the Jet Reaction in the comments below.