The American motorcycle brand is no less than a religion for millions of bikers across the world. A brief stint with some Harley machines was enough to make us understand why 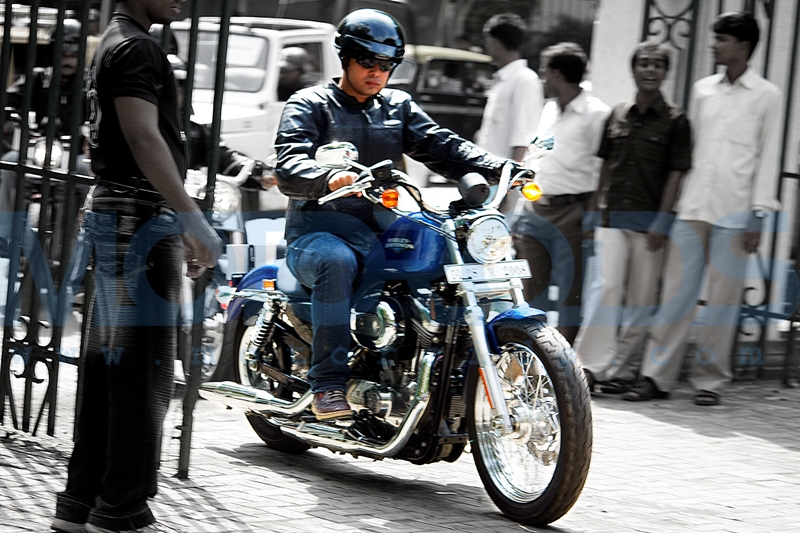 There is still some time before the American motorcycle major Harley Davidson starts selling its world famous bikes in India. However, the extent on which the company is creating awareness about the brand by organising various activities says a lot about its ambitions for the Indian market. Harley Davidson is surely betting big on India. The legendary American company, famous the world over for its big, burly machines is taking the Indian market more seriously than we ever imagined. The company plans to bring about 15-17 models from its global lineup to India, with two to three representations from every Harley motorcycle family. 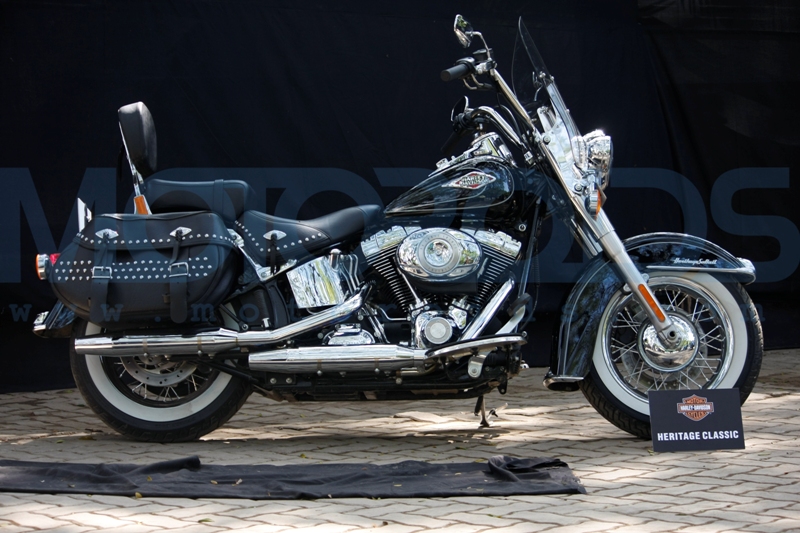 The Softail Heritage Classic bears a retro look but features advanced tech. The rear suspension of this bike is horizontally placed beneath the body 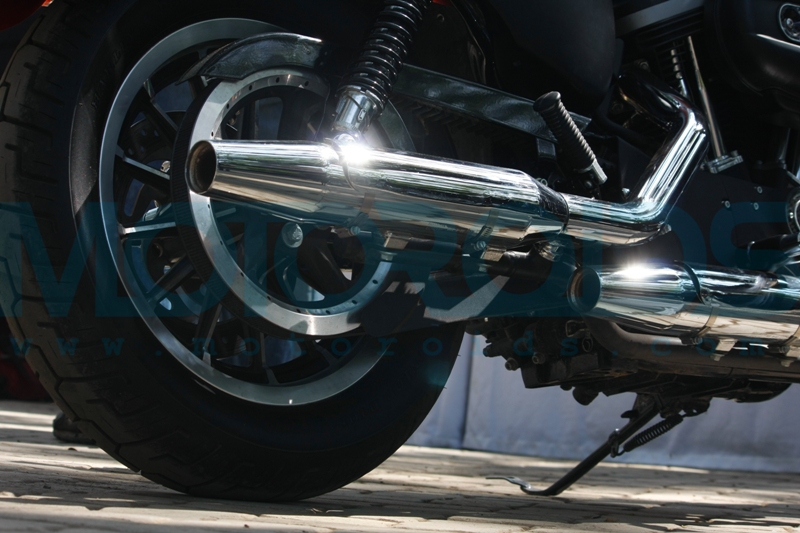 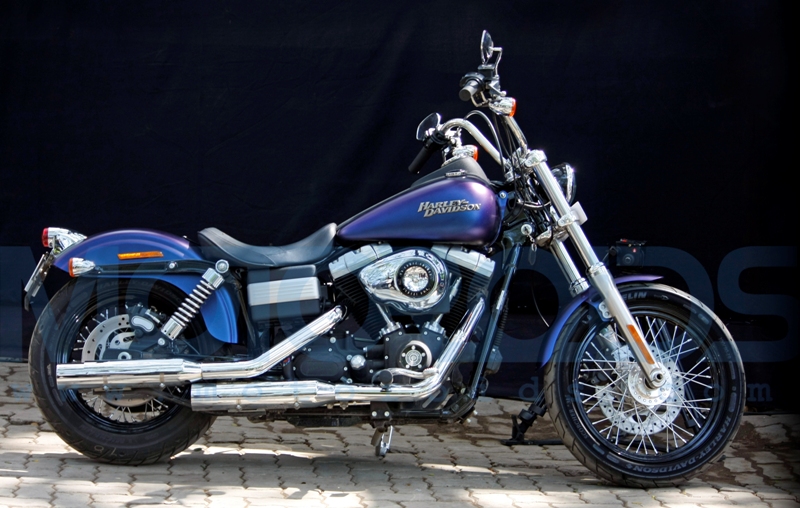 Harley-Davidson organized a boot camp at Mahalaxmi Race Course in Mumbai. Motoroids were there, and were mighty impressed to see a lineup of about 15-odd Harleys glistening in all their chromed glory. Harley-Davidson flew down some of the top tech guys from their US head quarters for an interaction with the media. Anup Prakash, the flamboyant MD of the company (A US marine and one of the intelligence officers in Bush administration at one time) was present at the boot camp as well, and took the lead in presenting Harley-Davidson’s history, heritage and product lineup to the media. Sanjay Tripathi, who did a splendid job at Yamaha Motor India and now leads the marketing division at Harley-Davidson was present at the boot camp as well. Every detail about the eight Harley-Davidson motorcycles present at the camp was explained to the media by the Harley techies. The activity was every bit worth participating in, as it enlighetened the audience about the brand, demysified some complicated details while also busting some myths.

Now, I am not a great Harley fan. I prefer sporty, revvy Japanese bikes to heavy cruisers. But an interaction with the Harley representatives, who, it seems can never get tired of finding pride in the brand’s legacy, heritage and its rather recent marriage with new-age technology changed my perception about the bikes quite a bit. By the end of the camp, there was a whole bunch of journos who had become Harley fans, after getting a taste of the legendary machines on Mumbai streets. As you would expect, I laid my hands on the best handling model of the lot – the 883 Sportster.

An assortment of Harley models were available for a test ride. We chose the nimble Sportster 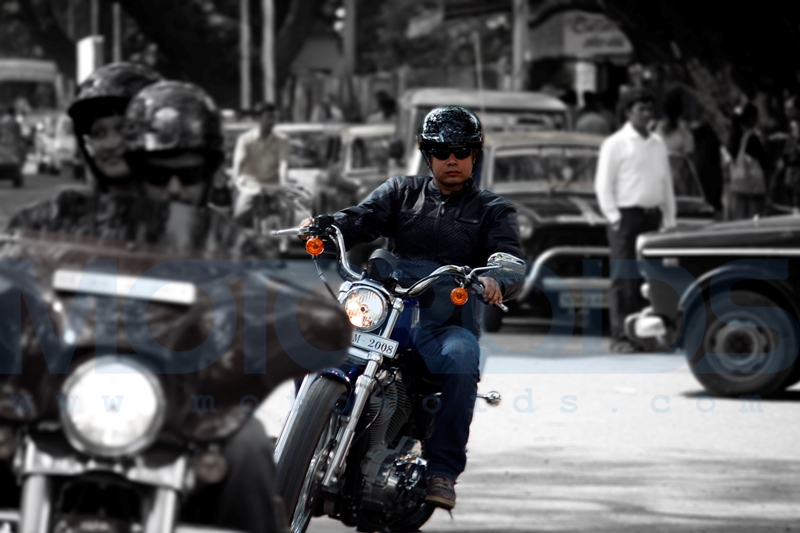 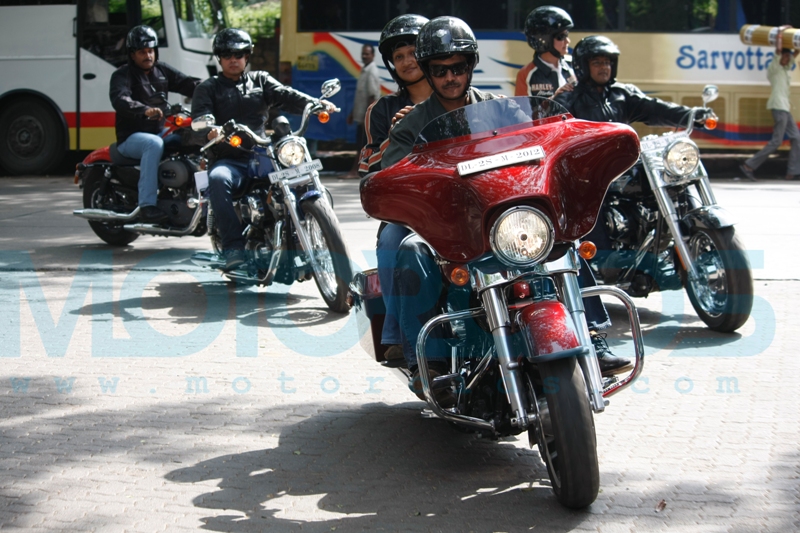 World’s smallest man on one of the world’s biggest bikes. Opposites do attract

Harley had the low-rider version of the bike for the ride. There were two reasons for choosing the bike. First, the Sportster series is the nimblest, lightest and best handling Harley Davidson family of Motorcycles. Secondly, these 883cc machines, priced at around 3.0 lakh rupees in the US market, are placed at a very attractive price point to lure the Indian bike buffs. We are expecting a price tag of about Rs 7.5 Lakh in India, which will make the Sportster the cheapest (and probably the best selling) big-bore machine in the country. We didn’t get to ride the bike for too long, but a spin around the chaotic Mumbai streets for a few kilometers did manage to give us a hang of what it feels like to be astride the American legend.

The first thing that you will realize once you put your bum aboard the soft and cushy Harley seat is that these bikes are not as intimidating from the saddle as they look from a distance. Disengage the side-stand, bring the bike’s weight entirely on its wheels and your legs, and you’ll be greeted by a pleasant revelation. The low centre of gravity and clever design ensures that the bike can be lifted off the side stand effortlessly. And I am not talking only about the 883 Sportster here, the rule applies to all the Harleys, including the heavyweights like the Ultra Classic. 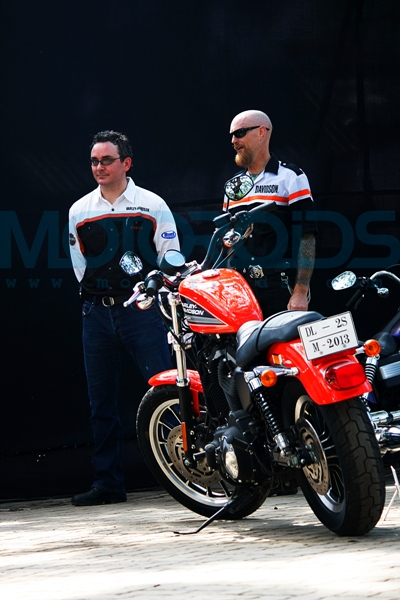 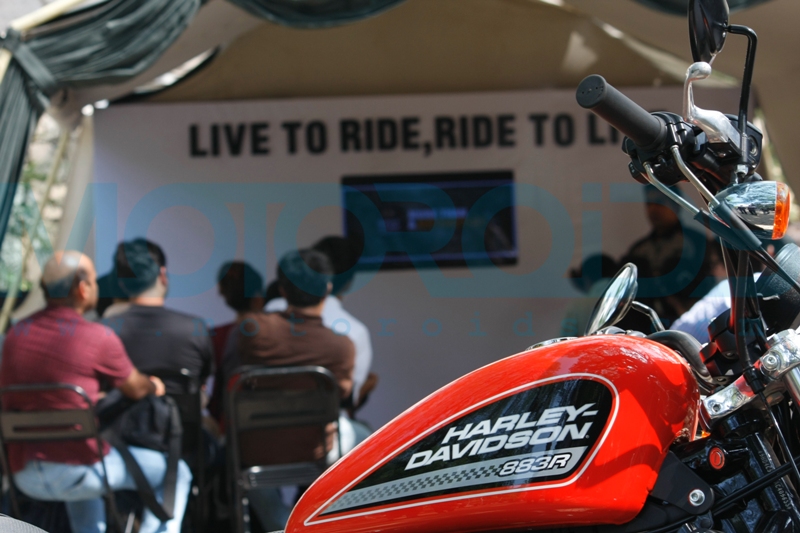 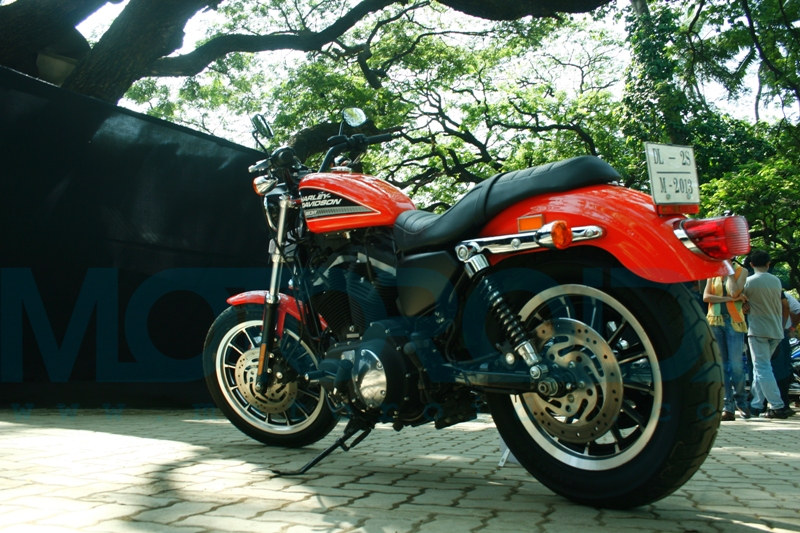 The level of equipment on various Harleys varies from just an analog speedo unit (like on the Sportster) to almost everything that you get in a car (like on the Ultra Classic). The handlebars are within easy reach, and the seating position doesn’t require you to straighten your legs too much either. Contrary to the common perception, even a female rider can ride the Harleys with ease, unless of course she drops it, in which case we have a good probability of finding an assortment of broken bones under the contraption. You have to be careful while engaging and disengaging the side stand and while riding at crawling speeds. The condition, however is not Harley-specific and applies to every other bike on the market.

The engine fires to life without any fuss, and once that happens, the punchy motor comes alive with the world famous sound that somewhat resembles the utterance potato-potato-potato. We liked the sound of the Harleys, but were not quite overwhelmed by it. Very honestly we were expecting some more drama and thrill. It’s not until these machines pass by you on the highway with the engine on full song that they are loud enough to impress or intimidate you. Another way to experience visual and aural Harley ecstasy is to witness a group of Harley bikes riding together. The combined roar of the Vees  makes the traffic ahead bifurcate to give way. 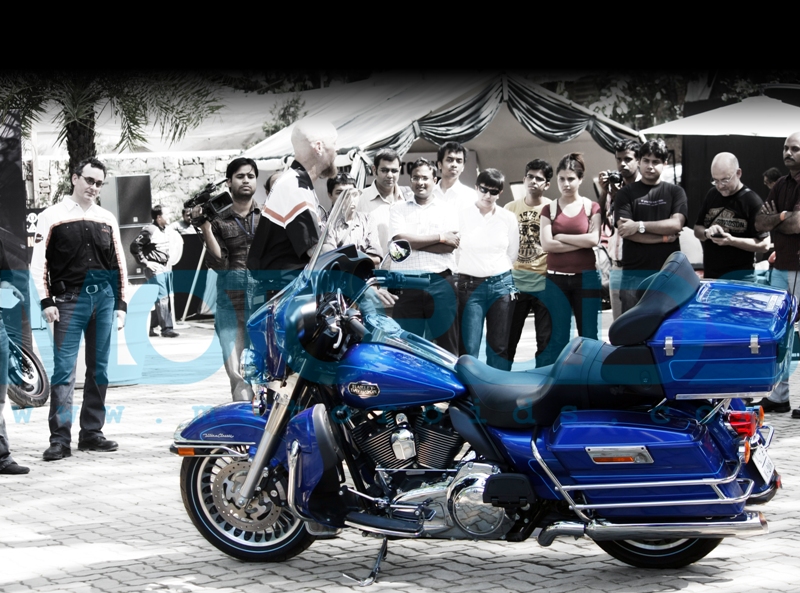 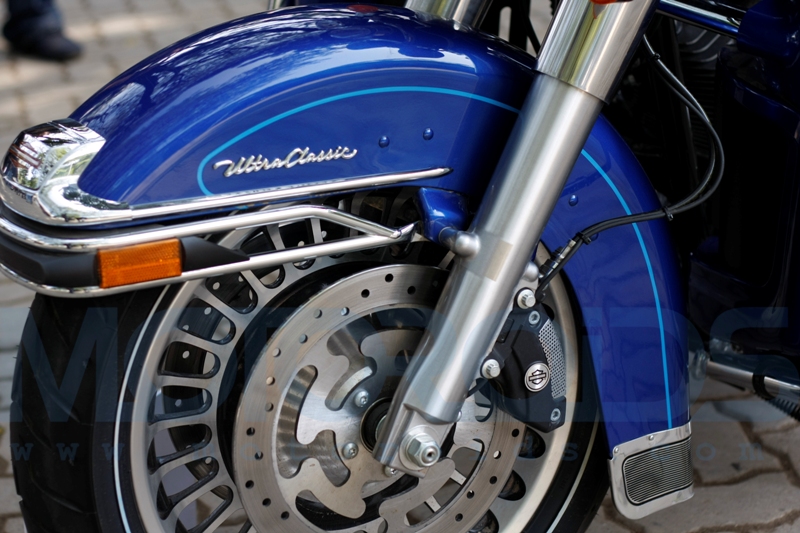 That fender design is unique to the Ultra Classic, and those front forks are one of the biggest in business 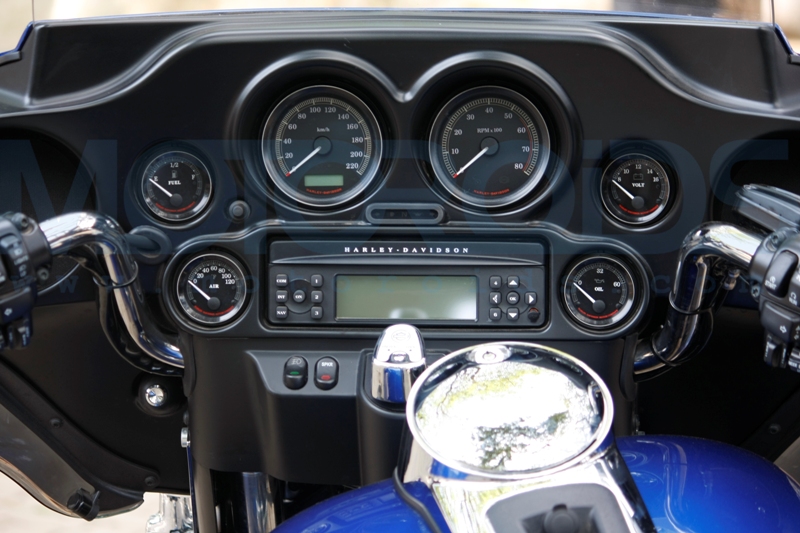 Looks more like the instrument console of a car, doesn’t it? It’s got a music player too!

Harleys are considerred to be crude and unsophiticated machines. While the pereception probably was correct in an age where people used to love Harleys for their vibes, in today’s advvanced world, Harleys are as smooth and vibee-free as any other bike. There are vibes at the handlebars, but we would rather have them than otherwise on a Harley. It may sound a bit deferential, but those vibes really add to the character of the machine. With plenty of torque available from right down the rev range, a sonorous beat, an erect riding posture and tons of the highest quality Hex-Chrome bouncing every ray of light off your machine, you feel nothing less than a king.

We’ll need to ride these legendary machines over a longer distance, in an environment more conducive to their personality so as to understand their character and the associated pleasure bettter. Treading Mumbai streets with its chaotic traffic isn’t really what you would like to term as the real Harley experience. As the good blokes at Harley promised us, the opportunity will come soon, and as always we will keep you posted. 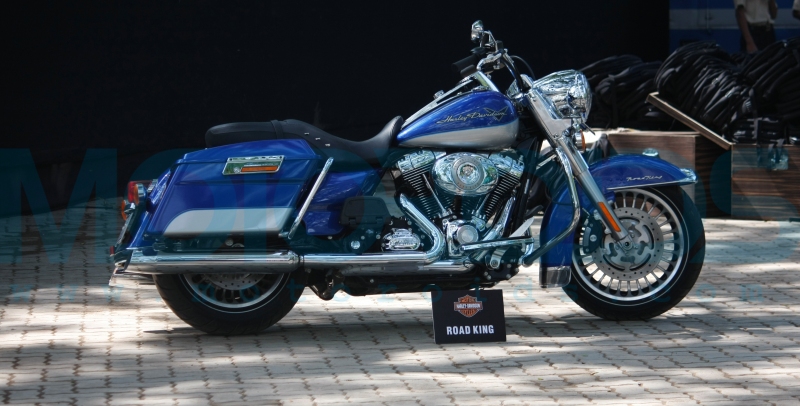 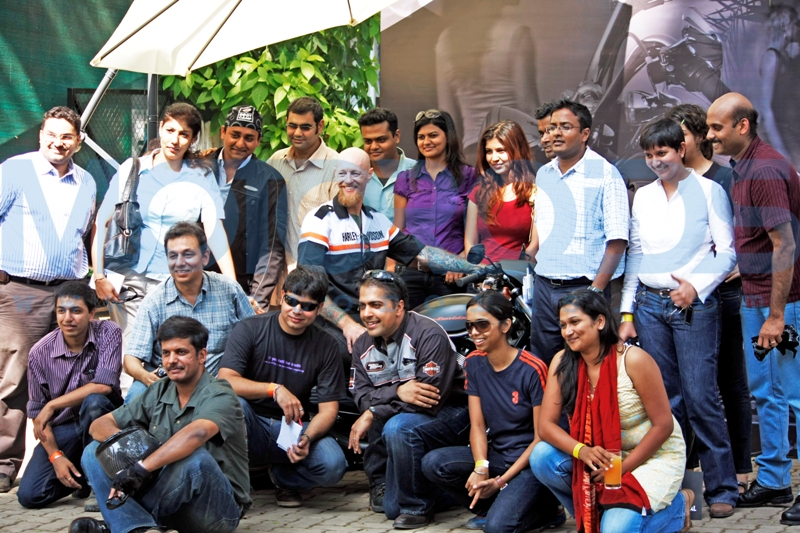 The entire Harley team strikes a pose with the journos 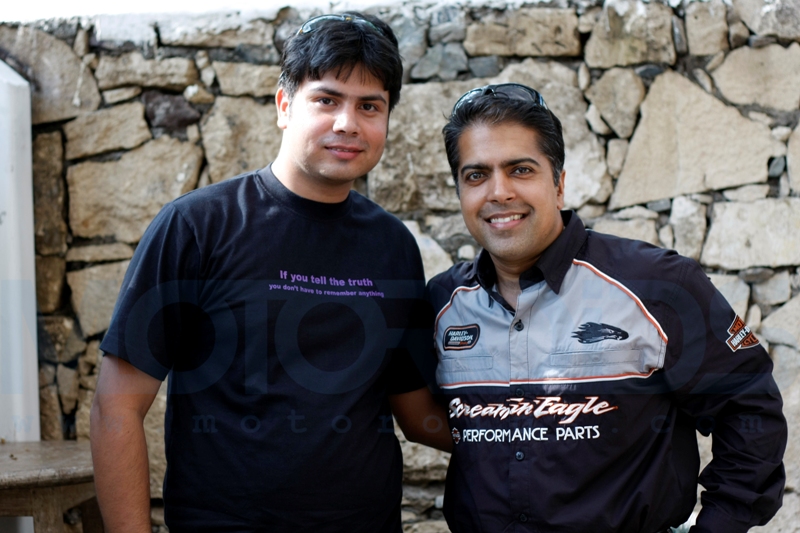 Anup Prakash – the enthusiastic Harley India MD. The man leads from the front

A panoramic view of the boot camp