Chevrolet have taken the wraps off the Colorado ZR2 concept at the 2014 Los Angeles Motor Show. The new concept paves the way for the new Colorado production version, and showcases the midsize truck’s off-road capability. The brutal, aggressive looking concept advances the legacy of Chevrolet’s previous ZR2 production models.

Click here to read all about the 2014 LA Auto Show

The Colorado ZR2 concept is powered by an all-new 2.8L Duramax diesel, with peak power rated at 181 horsepower at 3,400 rpm and peak torque rating 500Nm at 2,000 rpm. The 2.8L Duramax diesel is a four-cylinder engine designed to deliver more-efficiency. It features a variable-geometry turbocharger and a balance shaft for greater smoothness. The engine is married to a six-speed automatic transmission.

The Colorado ZR2 is four inches wider than a production Colorado Z71. The front and rear fascias have been designed to increase approach and departure angles when driving off road. The ZR2 also features aluminum tow hooks and the front fascia incorporates a built-in winch. 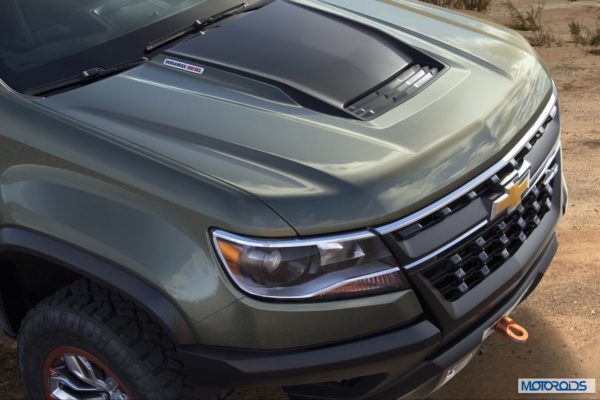 Inside, the concept gets ZR2 logos embroidered on the front-seat headrests and embossed in the custom Chevrolet Accessories-based floor liners. The ZR2 logo is featured on the instrument cluster display, as well as a custom inclinometer that shows degree of incline from front to back, and side to side.

We quite like the way this beat looks. Do you?