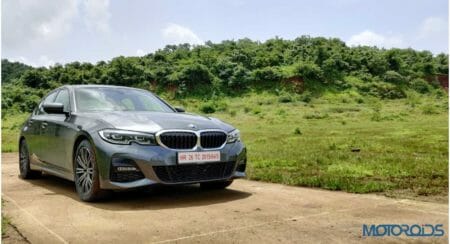 The BMW 3 series is an entry-level luxury sedan from the German auto giant. This car is ones the first step into the world of luxury automobiles. 3 series is a very sporty looking car Its hunkered-down stance and all the quintessential traits of the BMW family make it look very handsome.

The styling of the 3 series has evolved but stays true to its core "BMW look". The  3 series is a very handsome looking car. It gets the Laserlight headlamps all LED taillamps as well. the car is low to the ground with 157mm ground clearance and looks very sporty and appealing. the glam quotient is further amplified by the Laserlight headlamps with DRLs and a set of classy looking alloy wheels.

The interior of the 3 series is very sporty as well and reeks class. The car gets a very fluid 10.25-inch, touch-enabled Idrive infotainment system. The instrument console for the driver also is now all digital. BMW's focus has been always been on improving the interior quality. The quality of the materials used makes the car look and feel very rich. it gets a sporty 3 spoke steering wheel. The bolstering on the front seats and carbon fibre bits in the cabin make it feel racy and substantial.

The 3 series, being a BMW gets a plethora of safety features from Germany. The car gets front dual airbags and curtain airbags, ABS, CBC (cornering brake control), DSC (dynamic stability control), side-impact protection and run-flat tyres.

The petrol 330i variants of the car are powered by the highly appreciated 2.0l 4 cylinder turbocharged engine churning out a herculean 258hp at 5200rpm and 400 Nm at 1450rpm while the diesel 320d variants are powered by a 2.0l 4 cylinder turbocharged motor as well which is good for 190hp at 4000rpm and 400nm at 1750rpm both engines come mated with an 8 speed automatic gearbox. In terms of efficiency, petrol variants of the vehicle are rated for a company-claimed figure of 16.05 km/l, while the diesel is rated for 22.69 km/l.

BMW has a knack for getting its diesel engines right. The 2.0l diesel engine is a refined free-revving engine. It has a wide powerband which suits the sporty nature of the car. the same stands true for the petrol variants as well.