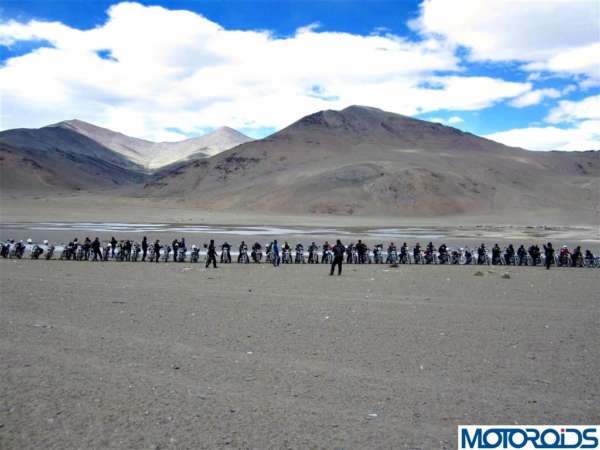 Now in its 11th edition this year this holy grail of all motorcycle rides in India will take you through three mountain ranges, six passes – reaching a dizzying peak at 18,380 feet on Khardung La establishing a very different level of thrill and adventure.  This year, 70 riders will ride their Royal Enfield motorcycles to Khardung La – the world’s highest motorable road at 18,379 ft in one of the most arduous motorcycle journeys. These motorcyclists will ride for 17 days covering more than 2500 kilometres and battling the treacherous terrains in the most majestic locations of Himalayas that include Parwanoo, Narkanda, Kalpa, Kaza, Keylong, Sarchu and Leh.

Every year, hundreds of Royal Enfield motorcyclists ride up to the Himalayas between the months of May and August. The Himalayan odyssey is the full circle; it’s like 365 days packed into 1 trip. Start off with sweltering heat in the plains on 6 lane highways. Gradually enter into the hilly areas with tantalising curves with a high possibility of getting lashed by the monsoon showers. Each mountain pass exposes you to a different landscape which keeps getting more and more desolate and by the time you start appreciating the romanticism you reach Leh which is like an oasis.  The Nubra valley exposes you to a more gentle and idyllic form of Ladakh while the Spiti valley open up another dimension altogether.

The second edition of the Himalayan REunion will take place on June 29, 2014 at Leh.

Every year, hundreds of Royal Enfield motorcyclists ride up to Leh and the nearby Himalayan region between the months of May and August. Whether they take the world famous Manali-Leh road or the road via Srinagar and Kargil, everyone celebrates after reaching Leh.  Each person might have a different reason to celebrate, to some it may be an annual ritual that they have been undertaking for years, some might see it as conquering their own personal fears and to some it may have been a dream to ride to Leh, yet, some of them ride in groups and some ride alone.

Besides a Musical extravaganza, the action packed weekend would see various events and games around motorcycling with attractive prizes to be won. These would include Team events like ‘Assembly Wars’ which would test sheer strength and knowledge of the enthusiasts and individual events like the crowd favourite ‘Slow Race’ and ‘trials’ testing the riding skills.

The Royal Enfield Himalayan REUNION is our way of recognizing the spirit of these riders and celebrate with them. The event will provide the bikers with an opportunity to share their biking experiences, especially, with the ones made while riding to the Himalayas for the first time. For those who have already conquered the hills once, this would be a chance to relive their earlier experiences. The Himalayan REUNION will take place on the 29th June once the participants at Himalayan Odyssey 2014 reach Leh. Since Royal Enfield celebrates the spirit that is motorcycling, if you are a lone or accompanied rider, (and not a part of the Himalayan Odyssey), you can still ride out of your city and converge at Leh to celebrate the spirit of biking and be a part of the Himalayan REunion at Leh or in other words HOME at 11,350ft.