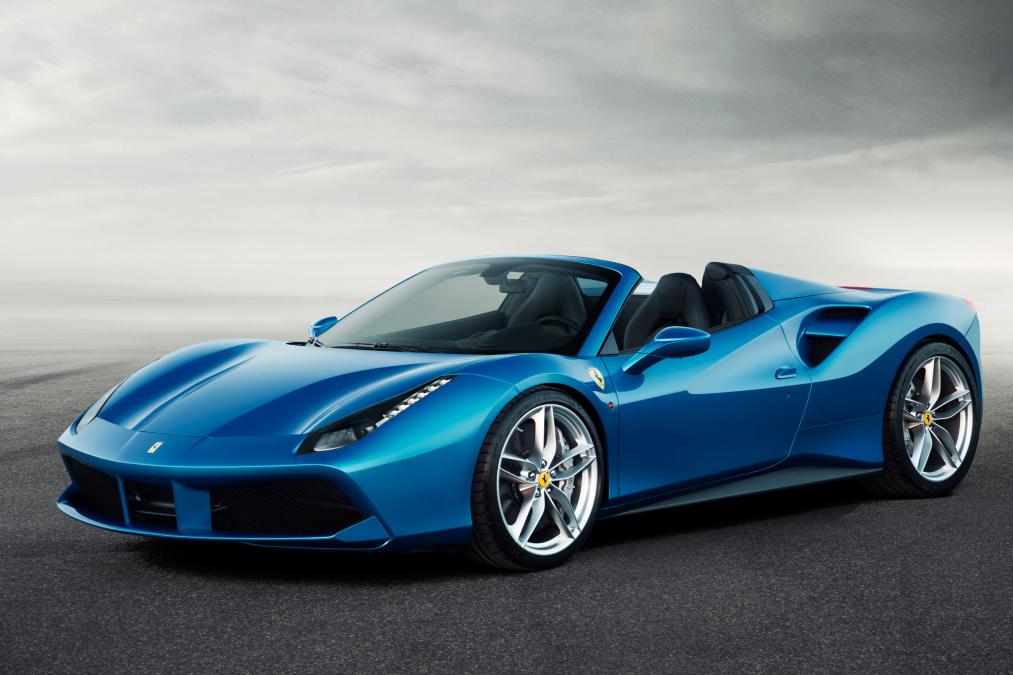 Ferrari has officially revealed the 488 Spider. A retractable hard top version of the recently launched 488 GTB, the 488 Spider is Ferrari’s most powerful mid-rear-engined V8 car with a folding hard top.

Apart from a stunning design, Ferrari is claiming lower weight (-25 kg) and better cockpit comfort compared to the classic fabric soft-top. Like most such previous Ferrari Spider versions, the 488 Spider is aimed at the enthusiasts seeking open air motoring without compromising on performance or aural pleasure. 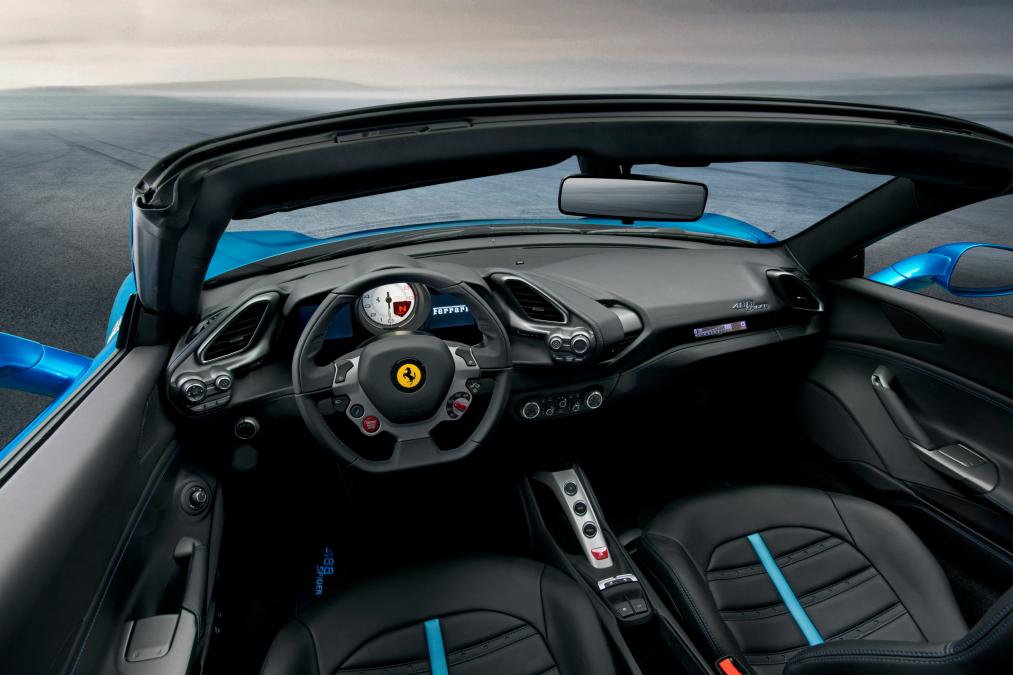 Boasting cutting edge tech such as an aluminium spaceframe chassis and bodyshell, new turbo-charged V8, advanced aerodynamics without compromising dynamic ability, the 488 GTB aims at being the definitive hardtop in its segment.

The world premiere of the 488 Spider will be at the Frankfurt International Motor Show in September but the official images of the car have been revealed in the new Blu Corsa livery.

Powering the 488 Spider is the 3902 cc turbo-charged V8 that debuted just a few months ago on the 488 GTB. Power output is rated at 670PS combined with maximum torque of 760 Nm at 3000 rpm. 0-100km/h is claimed at 3 seconds flat and 0 to 200 km/h comes in 8.7 seconds. The new turbo engine is 100 PS more powerful than the naturally aspirated engine it replaces with lower CO2 emissions. The new turbo V8 is also highly acclaimed for its lack of turbo lag and great responsiveness.

Complementing the terrific performance of the engine is the signature soundtrack, unique to the model. Exclusive exhaust headers with longer, equal-length piping and a flat-plane crankshaft enable a distinctive sound for the car. It was also further enhanced by an in-depth study of harmonics and tonality at different engine speeds. 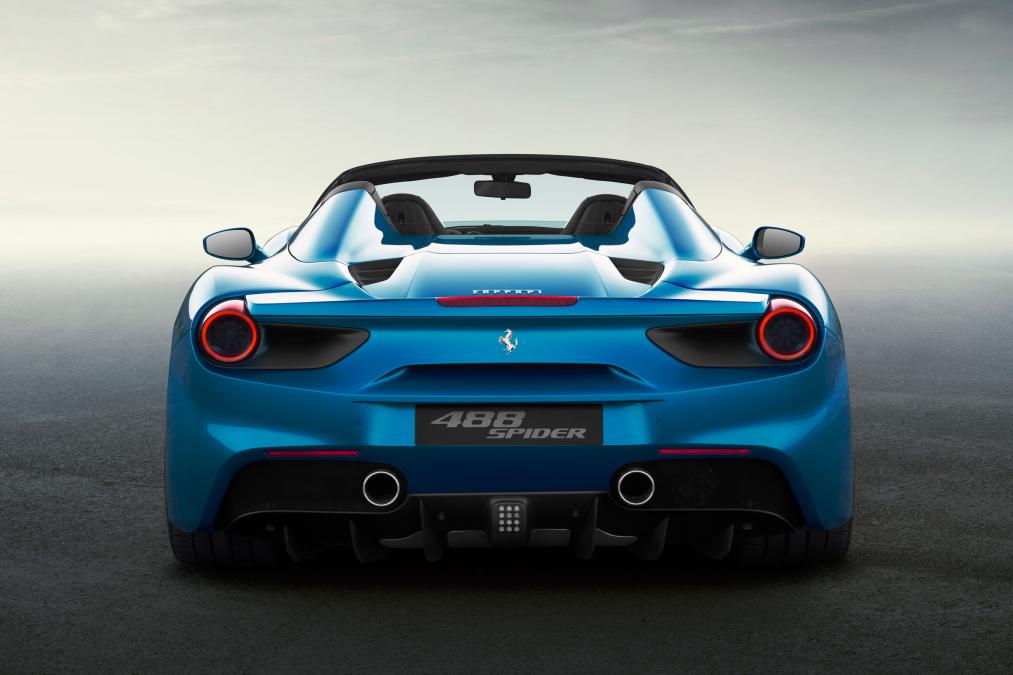 The advanced aerodynamics, in addition to reducing drag also took into account factors relating to in-car comfort. The electric glass rear wind stop can be adjusted to one of three positions to maximize comfort when the top is lowered. Fully lowering the wind stop allows the occupants to enjoy the engine soundtrack even with the roof raised regardless of the weather or driving conditions.

The 488 Spider boasts a spaceframe chassis made of 11 different aluminium alloys combined with other noble metals, such as magnesium, each one used in a highly specific way.  This yields the same torsional rigidity and beam stiffness figures as the coupé, improving the chassis’ performance by 23% over that of its predecessor.

The retractable hard top folds backwards in a compact manner over the engine, and takes just 14 seconds for the top to be deployed or retracted. 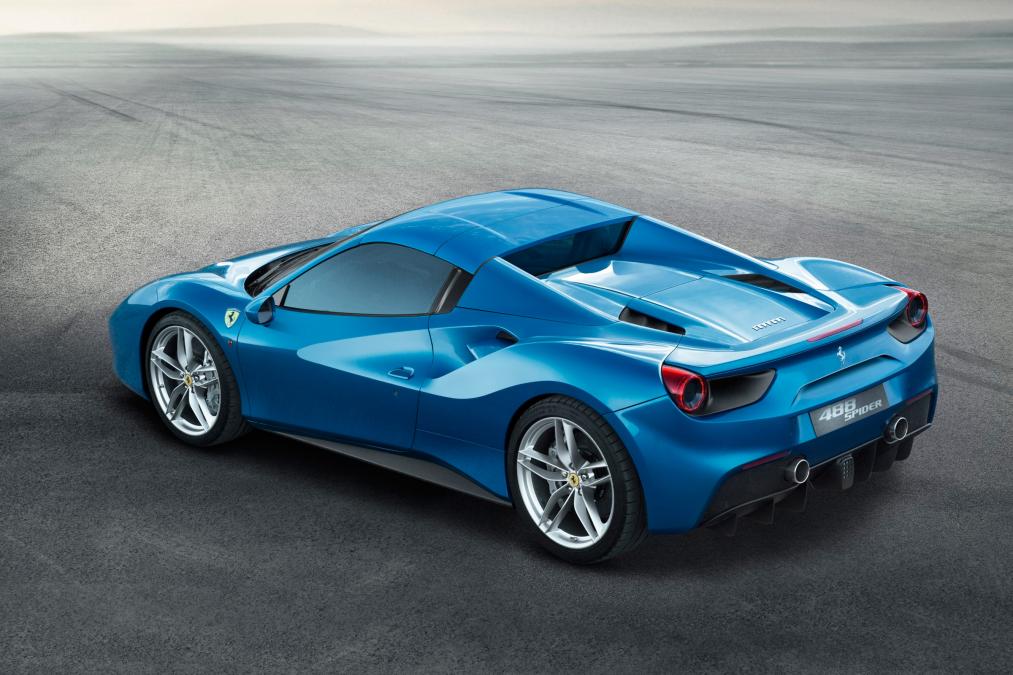 Human inputs of race drivers played a significant role in the development of the car, and its claimed resultant prowess around corners. Driver feedback was given a very high priority to make the car’s dynamic behaviour more engaging. The car’s mechanical system, thus works in complete tandem with its electronic systems. The company claims that the electronic systems, now fully integrated with the SSC2 Side Slip Angle Control System, offer 12% faster acceleration out of corners than the 458 Spider, and overall response times which are 9% more rapid than the previous Spider

Check out the technical specifications of the car below, followed by a detailed image gallery and a reveal video