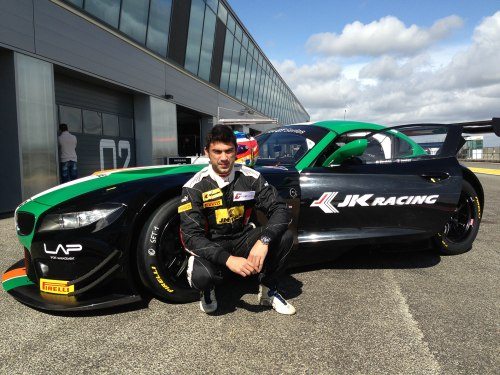 Indian racing driver Armaan Ebrahim and BMW Sports Trophy Team India endured a forgettable weekend at round four of the 2013 FIA GT World Series held at the Slovakia Ring circuit.
The team was positive coming into the weekend on the back of its maiden podium at Zandvoort last month, but disappointment was in store as mechanical issue put paid to the weekend.
“We were hoping to pick up from where we left off, but unfortunately it wasn’t to be”, said Armaan.
“On Saturday morning, the first practice session was quite promising as we were around 1.2 seconds off the pace and were still working on dialling the car in”, he continued.
“We were hoping to make a step forward in FP2, but then the guys discovered that the exhaust was broken right near the engine mounting”, he explained.
The nature of the issue meant the engine had to be removed in order to replace the exhaust system, which forced the team to sit out of the second and final practice session before qualifying.
“It was my first time on this circuit so track time was critical, plus we still had work to do on the front-end so missing the second practice cost us a lot”, Armaan continued.
The Indian also had a new teammate for the weekend – Slovakian Filip Sladecka who proved to be a value addition to the team given his intricate knowledge of his home venue.
Meanwhile, the crew ensured that the Team India BMW Z4 was ready in time for qualifying and Armaan went into the session with just seven laps of track time from the first practice session. It was immediately clear that the rest of the grid had found significant improvements in the second practice session as the gap to the front-runners had slightly increased.
To make matters worse, Armaan encountered yellow flags on his fastest qualifying lap, which cost him three-tenths of a second – a significant loss considering the extremely close grid.
“I had to back off due to yellows in the final sector, so we could have been slightly further up. Considering we had just seven laps of practice it wasn’t so bad”, he revealed.
Post-qualifying, the squad worked hard and poring over the data to see where improvements could be made and things seemed positive during the Sunday morning warmup, preceding the first race of the weekend.
Armaan started race one from 17th and on the grid and managed to make up a few places on the opening laps, and was running 14th when he realised something was amiss.
“On lap three, the engine suddenly seemed to lose power and then I saw a plume of white smoke in the rear-view mirror, and I knew it was over”, remarked Armaan.
The Indian managed to pull off the circuit safely and once back in the pit garage, it was clear that the car had suffered a terminal engine failure which would require replacing the engine.
The team tried its best to replace the entire powertrain during the three-hour gap between the qualifying and the main race, but could not fire the car up in time.
“It was a bad weekend, that’s how it is sometimes”, said Armaan.
“Everyone worked extremely hard, today and last night so it is really disappointing for