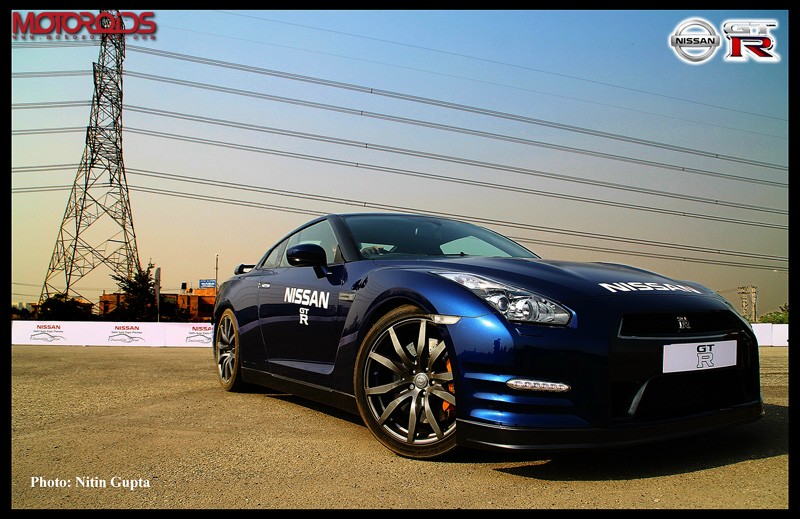 During its Auto Expo preview drive, Nissan India brought its technological flagship, the GT-R to Noida. With the no-emission, clean, green and silent Leaf on one side and the fire spitting Godzilla on the other, it was quite a dichotomy. The journalists were provided rides in the car around a specially designed course which allowed rapid acceleration and a good slide at the end of it. At the wheel was one of Nissan’s test drivers, pushing the car to its limits and making the passenger seat occupants howl in excitement.

An interesting incident happened during the course of the day. During the initial rounds of the GT-R rides, the front fender of the car hit a cone, and due to the impact the bonnet of the car flipped open a tad from the windscreen as a pedestrian safety feature. Nice to know the technology really works when required. Full marks to Nissan for having incorporated such small details in a true supercar – making it fit for everyday use as well.

Here’s all what you need to know about the GT-R, followed by the images and videos of all the action at the event.

The Salient features of the Nissan GT-R are 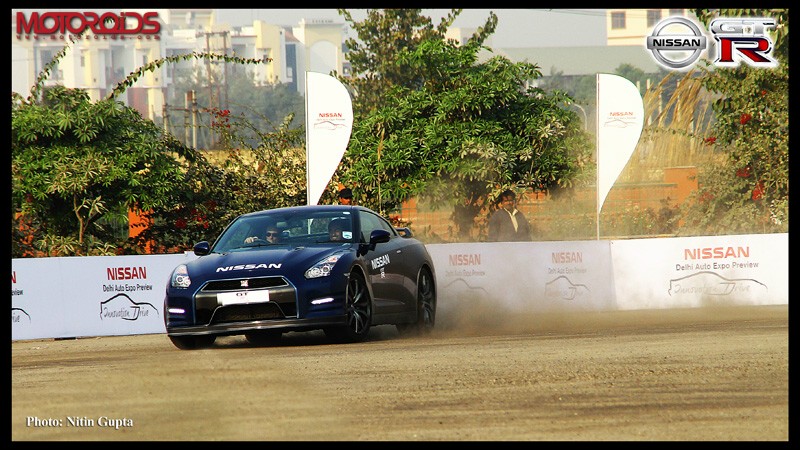 The GT-R is capable of lapping the Nürburgring in Germany in under 7 mins 30 seconds, making it one of the fastest road cars in the world. The power and torque output figures for the car are mind boggling. The 3.8-litre twin turbo V6 engine develops an incredible 530PS, to give a 0-100kph sprint time of 3.0 seconds and a top speed near 320 kph.

And yet the GT-R is easy to drive, docile in traffic and well mannered and sure-footed. The key is the immense flexibility of the engine allied to the stable and predictable handling characteristics of the all-wheel drive chassis.

The GT-R story goes back decades, but the current GT-R is the first not to have been based on an existing mass-produced Nissan. And that allowed design director Shiro Nakamura, product chief designer Hiroshi Hasegawa and their team much greater freedom.

The muscular GT-R has been clearly influenced by Japanese car culture and video games. “The mission was to achieve a distinctive car, a supercar, but not a normal fast car – it’s chunkier, more practical and more muscular,” says Nakamura. 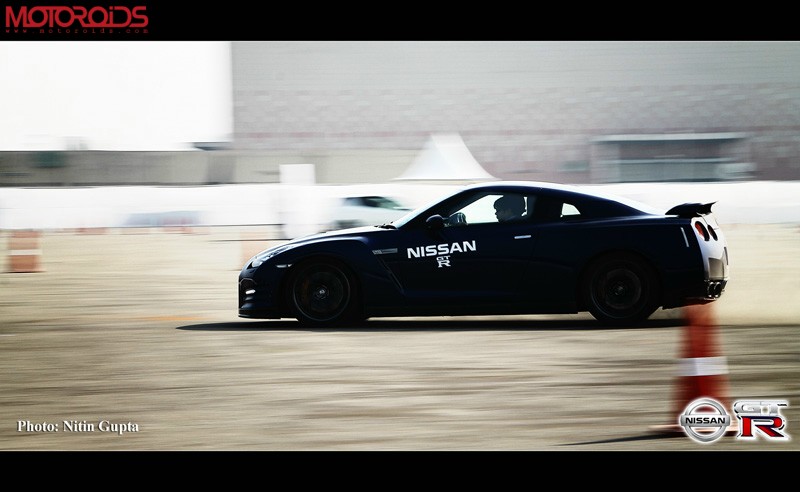 Yet it is also remarkably practical. “It’s easy to get in and out of, has good visibility and is easy to drive. That functionality is reflected in the design. It is clearly not an Italian, German or American car – it is unmistakably Japanese.”

“Our objective was to create a flagship model to promote our technology, but also to develop a new type of supercar,” explains chief vehicle engineer and former racing driver Kazutoshi Mizuno. “Supercars have traditionally been aimed at drivers with advanced skills, but the GT-R supercar can be driven fast and skillfully by just about anybody under just about any road conditions.”

At its heart is the hand-built twin turbocharged VR38DETT 3.8-litre V6 engine, which has been specially developed for the GT-R. A perfect example of Nissan’s philosophy of constant development, its power output is forever increasing. From 485PS it was raised to 530PS for the 2011 Model Year, as featured at Nissan’s DAE pre-show driving event. 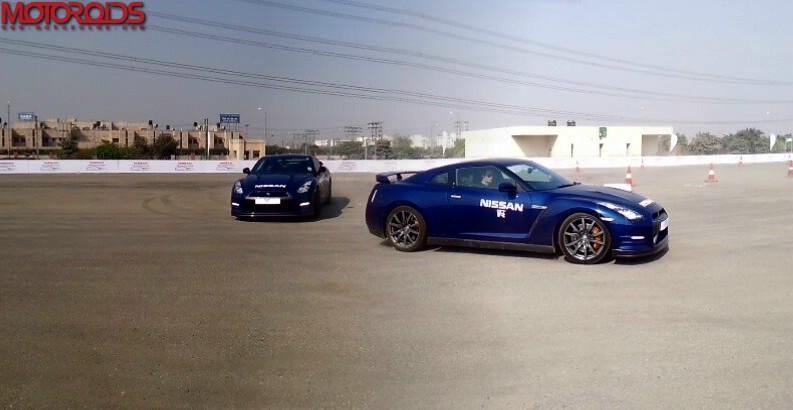 Power figure will rise to 550PS for the 2012 Model Year, which will reduce the 0-100kph time to 2.84 seconds. Power is delivered to all four wheels via Nissan’s GR-6 six-speed twin clutch transmission, which was also specially developed for the car.

The driver can either shift gears manually via paddles – made from magnesium – located behind the steering wheel or opt instead for automatic changes as the mood dictates. Either way, since there is one wet clutch for odd gears and one wet clutch for even gears, the next gear is already preselected which allows for exceptionally fast shifting. There’s also an automatic throttle blip on downshifts to precisely synchronise engine speed and give added driving satisfaction.
While in manual mode, the driver can select a more extreme shifting range: R mode speeds up the GT-R’s already fast shift changes. A computerised control predicts the driver’s next gear change, based on throttle opening, vehicle speed, braking and other information.

In automatic mode changes are made to maximise fuel efficiency. Higher gears are used whenever possible, making full use of the car’s long and flat torque curve which peaks at a massive 632Nm. As a result, the car can be driven in sixth gear for long periods at low speeds, and still offers good throttle response. Such docile behaviour is at odds with most equivalently fast supercars and is one of the many unique aspects of this technology flagship.

The double wishbone front and multilink rear suspension offers outstanding straight-line stability at all speeds, plus class-leading handling and braking in all situations – from urban commutes, to snowy and slushy roads, to the racetrack.

The dampers can be adjusted by the driver to either Comfort, Sports (the normal setting and producing the best possible handling/ride balance) or R (high performance) settings. R mode delivers flat, hard cornering for high-speed and maximum feedback. Sensors measure 11 vehicle elements including speed, lateral acceleration, steering angle and engine, the data then analysed to provide appropriate damping forces for all situations.

All this is matched to one of the most advanced four-wheel drive systems ever developed in a production car, offering unmatched traction and handling security. The ATTESA ET-S system features a rear mounted independent transaxle which packages the transmission, transfer case and limited slip rear differential in one compact assembly independently mounted on rubber bushes. Moving the transmission to the rear in this way gives the GT-R a superb weight balance, at the same time as enhancing front seat leg room.

The system includes Vehicle Dynamic Control (VDC-R), the Nissan GT-R’s electronic stability control system which continually monitors the vehicle’s behaviour, adjusting torque to the wheels to maintain stability. Electronic traction control is also fitted to rear mechanical limited slip differential, preventing wheel spin and improving grip. The design uses twin driveshafts. The main shaft, made from a carbon composite, takes the drive from the engine back to the transaxle while the other transfers drive forwards from the transaxle to the front wheels.

GT-R’s interior styling undoubtedly evokes the car’s performance capabilities, but it is also highly practical, with intuitive, easy to use controls. The driver grips a small diameter, multi-function steering wheel trimmed in soft, hand-stitched leather also used on the gear shift lever and on the dashboard, centre console and door trims. A red start button on the centre console is activated by the Intelligent Key system.

A large analogue tachometer takes pride of place in the instrument panel which is complemented by the multi-functional 7-inch LCD instrument display in the upper centre console. This displays a wide range of vehicle telemetry – everything from g-forces to accelerator opening and steering angle – with graphics developed in conjunction with Polyphony Digital Inc., designers of the Gran Turismo game for Sony PlayStation.

Whichever way you look at it, the GT-R is one of the most exciting and extraordinary cars ever created. The legend lives on.