Home Volkswagen The most powerful version ever of Golf GTI, the Clubsport S will celebrate 40 years of the iconic hot hatch 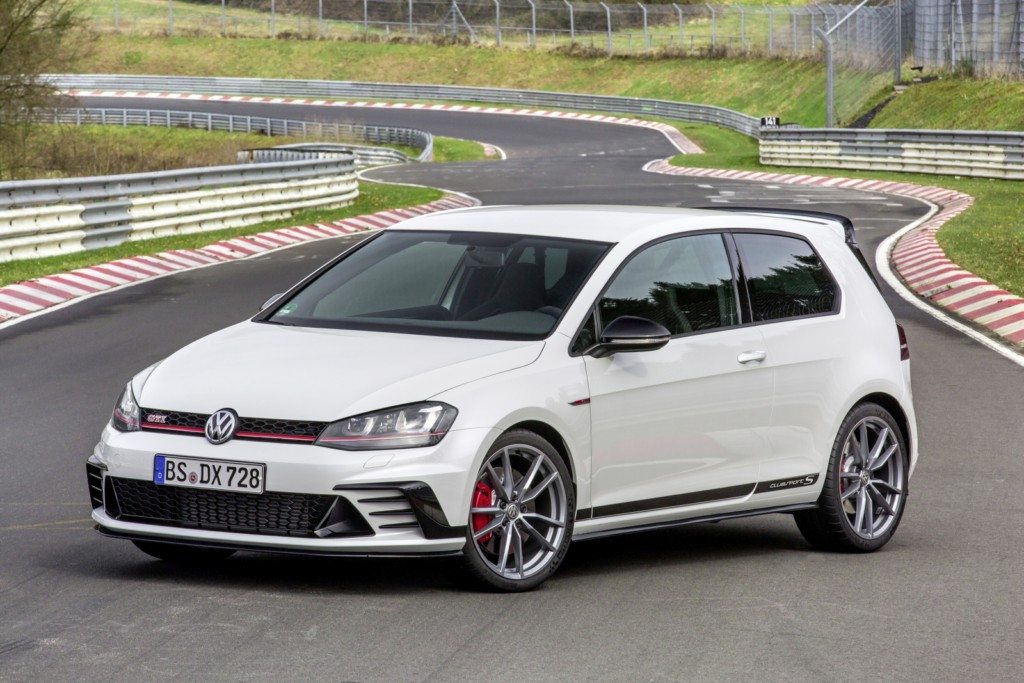 Volkswagen is all ready to celebrate their Golf GTI’s birthday at the 35th GTI Meet at Lake Wörthersee. To honour the successful 40 years of the Golf GTI, the maker will present the 310 PS Golf GTI Clubsport S edition at the event. The new Clubsport S will be accompanied by the 330 PS Golf GTI TCR race machine. Participants at the event will get an opportunity to explore the four decades old history of the Golf GTI through the showcase of all seven generations of the iconic model in Reifnitz. 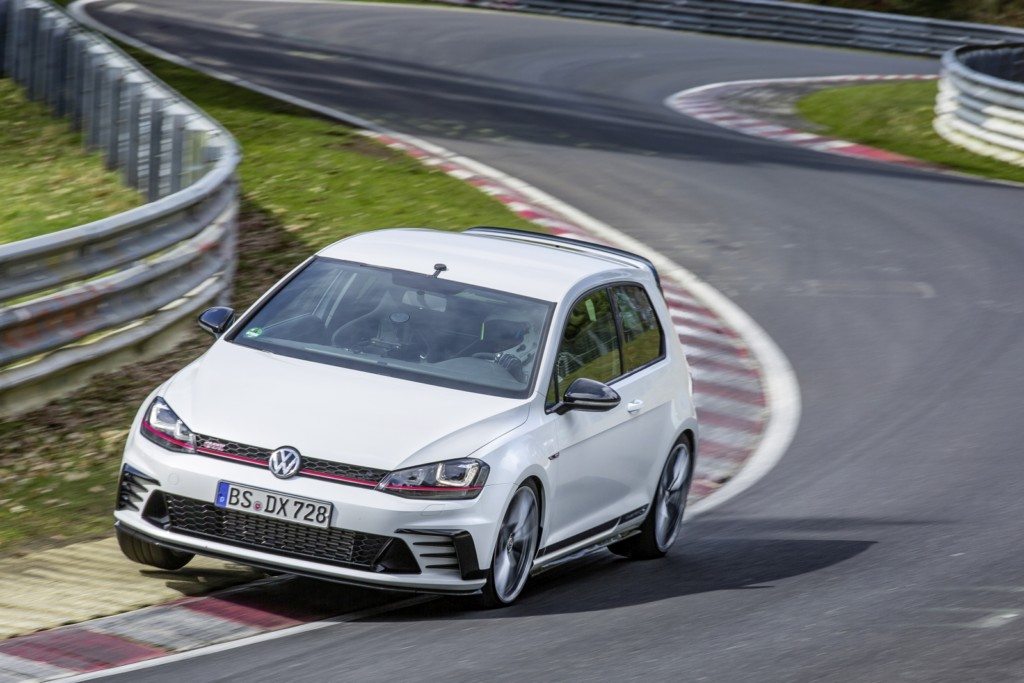 400 examples of the Golf GTI Clubsport S will be made by the German automaker, with each car of the series will feature the production number (001/400 to 400/400) on the centre console. Out of the 400 units, 100 units will be retailed in Germany. The Clubsport S will be available in Tornado Red, Pure White and Deep Black Pearl Effect colour options. 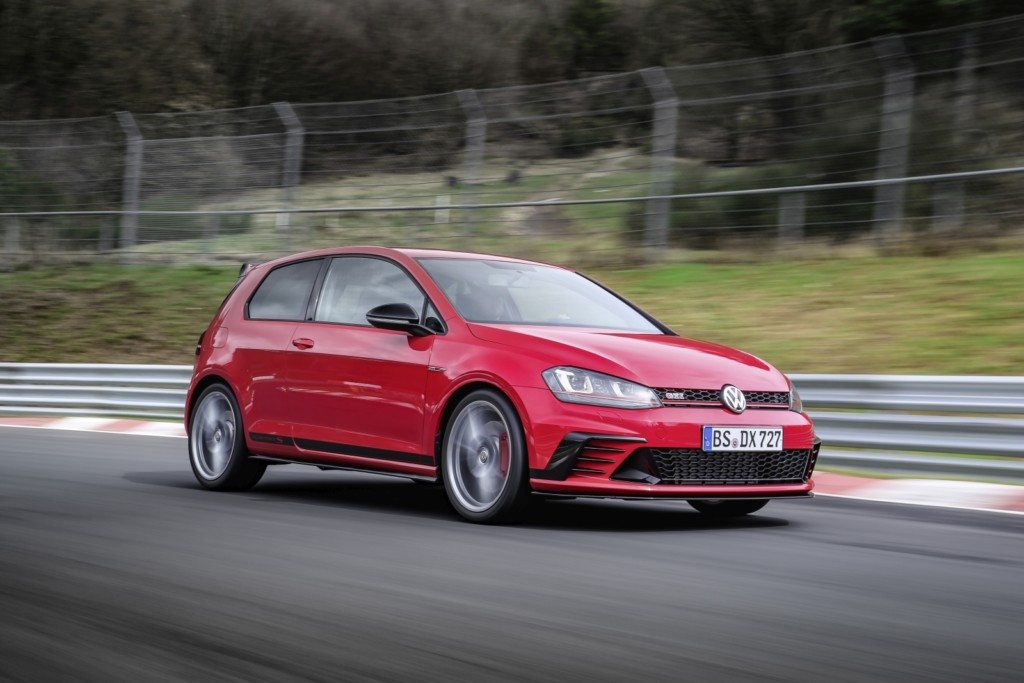 On the visual front, the exclusive Golf GTI retains the characteristics from its regular version and a few extra upgrades define the ‘S’ suffix. It rides on semi-slick Michelin Sport Cup 2 tyres wrapped around 19-incher Pretoria alloys. The front fascia comprises of Bi-Xenon headlights equipped with cornering lights and LED DRLs. The Club Sport S badges are featured on the side door mouldings. 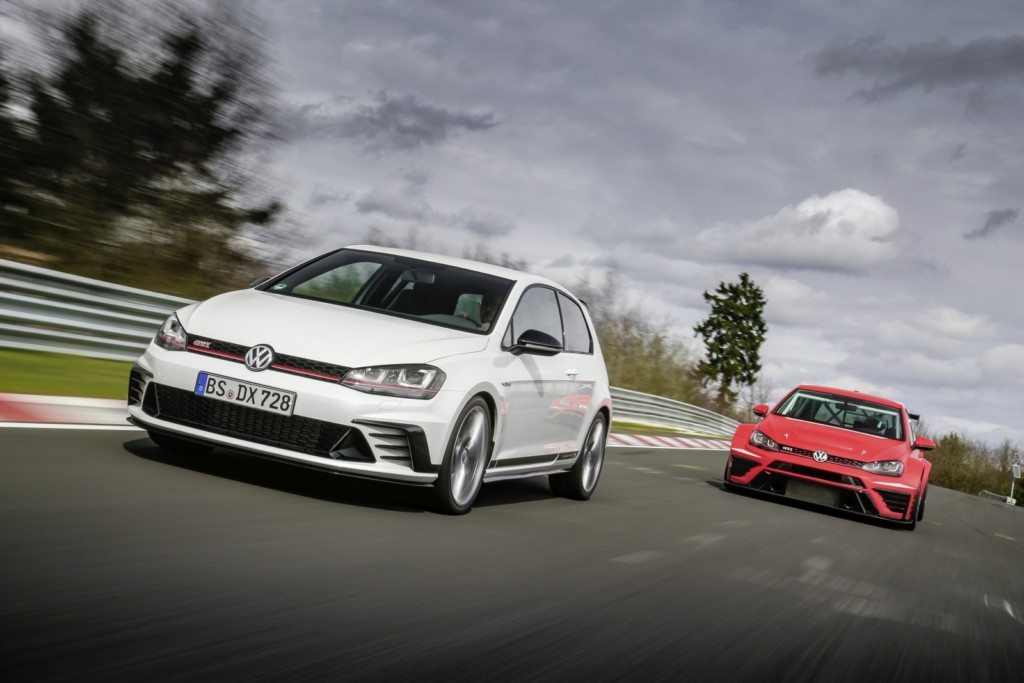 The rear windows get a dark tint and absorb 65% of the light. As for the performance upgrades, the sporty two-door hatchback gets a brake system that can withstand the high temperatures inflicted at a racetrack. The disc bells are made of aluminium and are connected to the steel discs by cast location pins, allowing them to expand radially when they heat up. The car’s handling has been improved as the unsprung mass of each wheel is reduced by around a kilogram due to the aluminum brake covers. 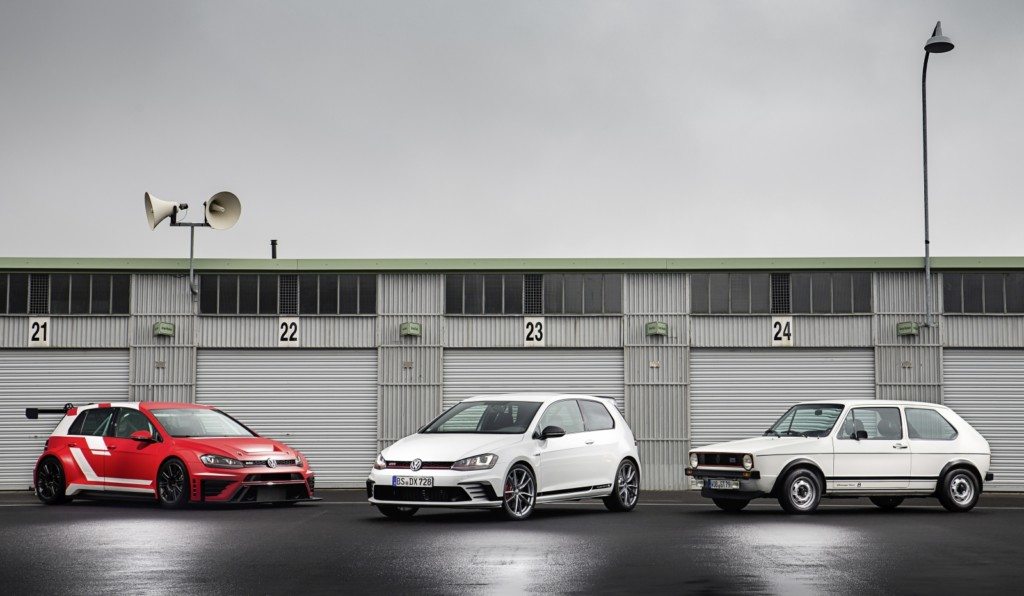 The front occupants will get racing bucket seats that are said to provide necessary lateral support. The car will feature the GTI insignia just like on the regular version. It will get iconic golf ball shifter knob with Alcantara trim, a red line in the safety belts, Honeycomb 40 design decals on the dashboard and doors, and Piano Black accents. Also, it will get an Alcantara-trimmed sport steering wheel, which has a chrome GTI emblem, red stitching and the 12-o’clock position marked out, was designed to be ergonomic. 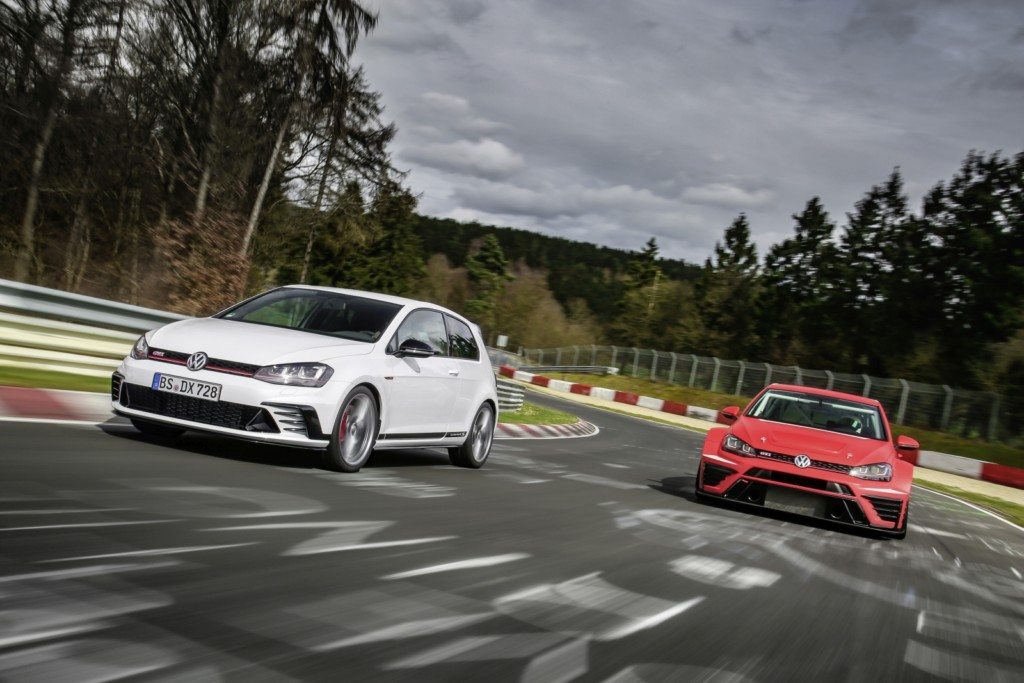 The engine of the front-wheel drive Golf GTI Clubsport S is technically based on the 1,984 cc TSI engine that also powers the other versions of the Golf GTI and the Golf R. It will make 310 PS of power and 380 Nm of torque between 1,700 and 5,300 rpm. The power will be sent to the wheels by a manual transmission kit. The Golf GTI completes the 0 to 100 kph phenomenon in 5.8 seconds and a top speed of 260 kph. 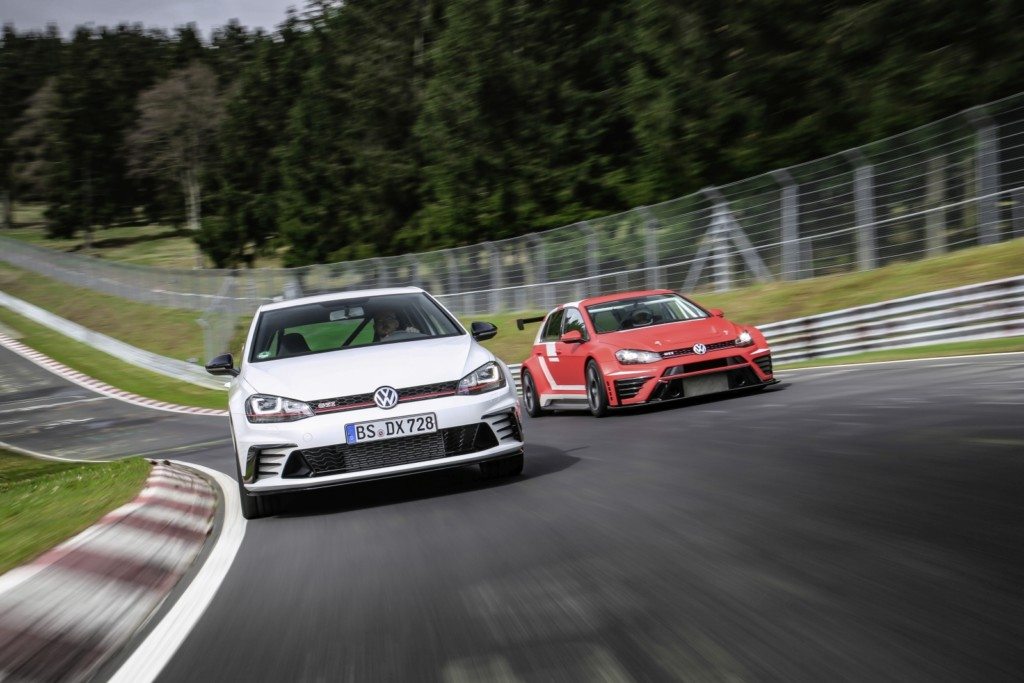 Interestingly, with German racing driver Benny Leuchter at the wheel, the car has just smashed the existing lap record for front-wheel-drive production cars on the Nürburgring Nordschleife, with a time of 7 minutes, 49.21 seconds. At the GTI festival, Volkswagen apprentices from the Wolfsburg and Zwickau plants will continue their tradition of presenting one-off Golf models on the stage. 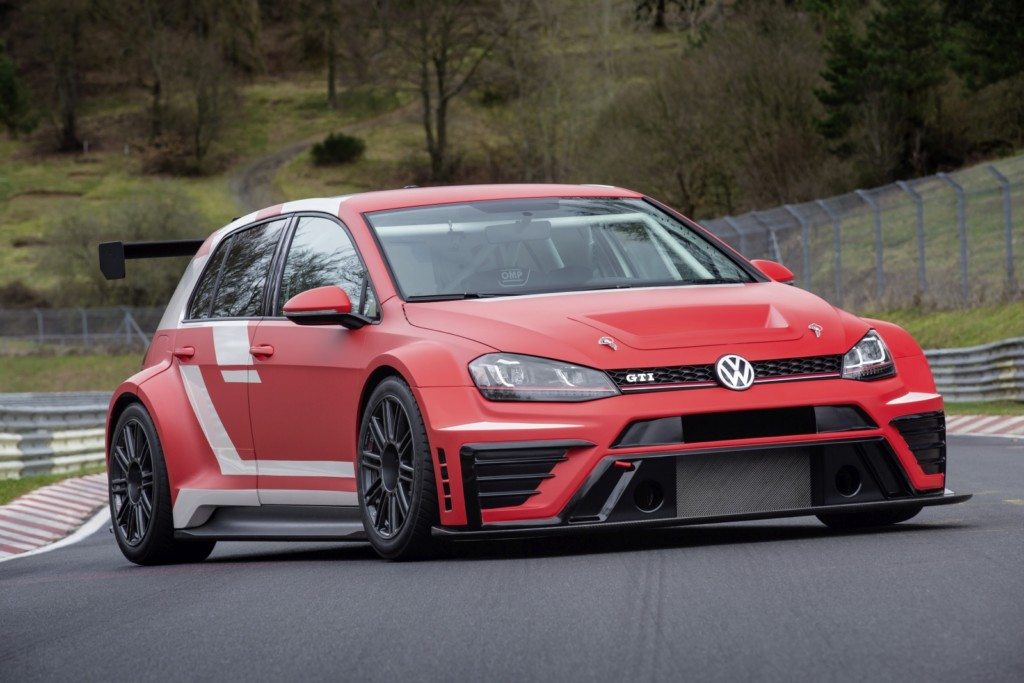 This year, the team from Wolfsburg will showcase the Golf GTI Heartbeat, which boasts 400 PS – or 10 PS for each of the 40 years the GTI has been in existence. The apprentice group from Zwickau will pay tribute to the 35th GTI Meet at Lake Wörthersee with the Golf R Variant Performance 35: this vehicle has an output of 350 PS – 10 PS for each meeting at Lake Wörthersee.