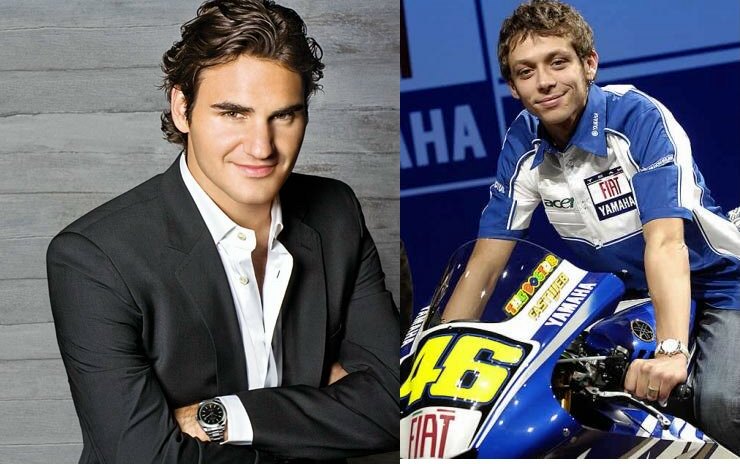 At 30, he may be fading away gradually, but he has just shown the world that he still has a lot of tennis left in him. Roger Federer, while talking to the media after winning his Wimbledon finals match with Andy Murray shared a lot about what keeps him going. During his interview, the tennis great mentioned Valentino Rossi as one of the legends that he draws inspiration from.

The tennis wizard who once toyed with his opponents with his elegant and masterful strokes, seems to have lost his magical touch of late. And it’s in times like these, when things are not going your way, according to Roger is when personalities like Rossi inspire you to dust yourself, get up and get to the job again.

“I drew a lot of inspiration from other great athletes in other sports as well – Michael Jordan, Tiger Woods, Valentino Rossi. They inspire me to keep pushing further. You know not just being happy with World No. 1 or with a Grand Slam title, but to reach for more. Obviously, I have to drive myself. But you sometimes need to see someone else do it so you feel that it is actually possible” said the legend.

“I’m a Basle fan. My hero is Michael Jordan. And at the moment I admire Valentino Rossi. I think it’s really fantastic what he has already managed to achieve in his sport” Federer had said in one his earlier interviews.

While Andy Murray broke into tears after losing to the Swiss maestro, the man himself admits how he had to look at his counterparts to gather himself. No matter what levels of greatness one achieves in his life, at the end of it, he has to admit that he’s human – prone to emotional upheavals that affect our lives at some stage or the other. In the case of Fderer, seems like the Doctor has treated him of his ailment already.