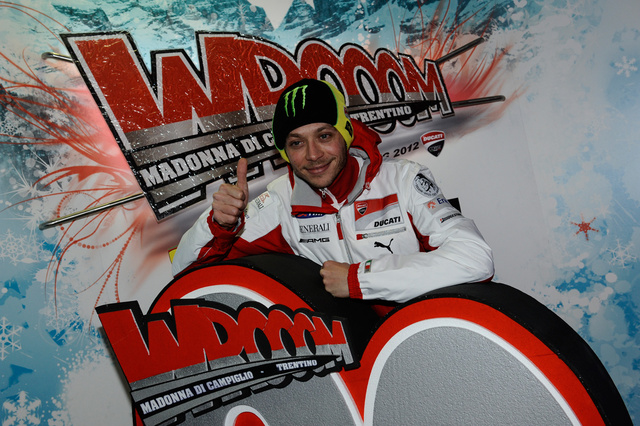 All the eyes were on the Ducati Team riders and their GP12s on the first day of Wrooom 2012 at Madonna di Campiglio. Nicky Hayden was the first of the duo to “take to the track” and to attend to the international press. The American talked about his fast recovery from an injured left scapula while the Doctor is all motivated to bury the memories of the dismal performance of last year and get back in the saddle and start winter testing in just over two weeks.

“I’m much better,so I’ve been able to remove the sling right on schedule. Here at Madonna di Campiglio, I’m starting to do a little training on a stationary bicycle under the supervision of the team physiotherapist, with the goal of being ready for the Sepang test (31 January – 2 February) as strong as possible. I can’t wait to ride the GP12, because it will be my first time ever. I wasn’t able to try it in the post-race test at Valencia, and I definitely won’t miss the next chance. I never made any secret that I prefer the new displacement to the 800s, although I think things will be much different than in 2006, beginning with the tyres, and the electronics have also come a long way. We’ll have more power, and we’ll have to find the right balance between controlling it while still taking as much advantage of it as we can. I’ve stayed in contact with Filippo (Preziosi) and the guys in the Ducati Corse department over the winter, and I know they’ve worked really hard. We’ll have a lot of things to try at Sepang. I know it won’t be easy, but I’m also confident that we can start to reduce the gap between now and the first race at Qatar. I believe in Ducati, this project and Filippo, and I want to get back on my Ducati as soon as possible“, said Nick Hayden in good chat with the media.

While Valentino Rossi commenced his talks with a faint smile and said,”We’re starting with a different spirit,when I came to Wrooom, I was still healing from my shoulder operation, and after that, the season didn’t go at all like we’d hoped. For this year, Filippo (Preziosi) designed a different bike, and they’ve made a big effort at Ducati to have it in time for the start of the winter tests. I visited the factory and saw it on a computer, and it’s beautiful. We’re not expecting it to be immediately perfect at Sepang, but rather to understand if we’ve worked in the proper direction. We’re very realistic, and our goal is to reduce the gap to our competition, step by step, working in a logical way, and from there to be able to refine the details in order to be competitive and to try and win. One of the most important things for going fast is to make the tyres work as they’re able to, so together with Filippo, we’ve tried to come up with a bike that will let them perform as well as possible. We’ll see if we’ve managed it. I like working with Ducati. I feel good here because there’s a nice atmosphere and we all have faith.”

Both the highly skilled riders appear very confident for the 2012 season and we really hope to regularly see them on the podium. Fingers crossed.