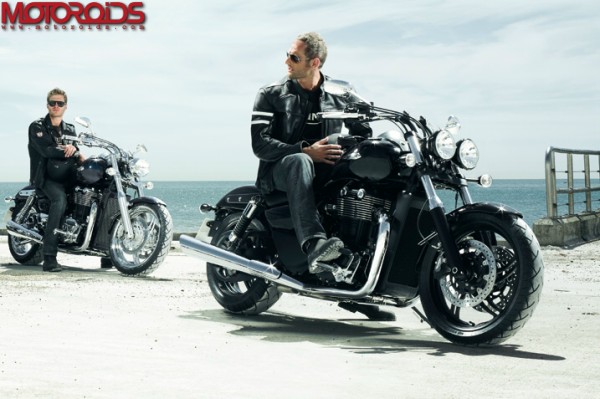 Triumph Motorcycles of the UK, the newest entrant in the Indian bike market will hit the Expo 2012 in Delhi with its entire range of motorcycles on sale in India. Triumph Motorcycles is readying itself to take a plunge into the Indian market with seven of its most prominent bikes covering its four primary model families (Roadster/ Super sports, Adventure / Touring, Modern Classics and Cruisers). These models will be displayed at the company’s exhibit area during the Auto Expo.

The offering will begin with the modern interpretation of the British parallel-twin, Bonneville, followed by the iconic naked sports bikes Speed Triple and Street Triple. Alongside these will be the off-roader Tiger 800XC and class-leading supersport bike Daytona 675. Closing the circuit would be the power cruisers of the family – Triumph Storm and the Rocket III. Here’s the list of bikes that Triumph wishes to exhibit at its pavilion in New Delhi.

On the occasion of announcement of the model line up for India, Ashish Joshi, Managing Director, Triumph Motorcycles India said, ‘We deliberated over the range of bikes to bring into India and decided to bring in these models to showcase the Triumph range. We have bikes which can cater to different needs – from 675cc Super Sport bike the Daytona 675 to 2300 cc Rocket III. The Indian market offers good potential and as a company, we are confident that each of our seven models within its individual category will be a trailblazer in very short time; similar to other markets we are present in.’

Talking about the strategy of the Brit bike maker, Ashish had said, ‘Our strategy for the Indian market will be well phased out. The first part of the roll-out plan will be a CKD assembly facility which will enable us to pass on duty savings to the customer.’