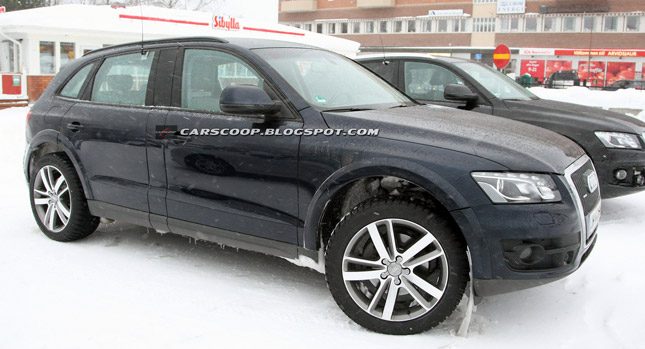 The good folks at Audi are certainly aware that a powerful luxury SUV/SAV manages to generate a lot of demand these days and is working on developing one. No, we are not reporting about the new Q7 again. Instead, a news that has surprised us too is that the German car maker is on its way to gun down the BMW X6 and is developing an all new model for its portfolio. Going by the insider’s info, extended wheelbase and widened tracks of the car that was recently seen, the pics we see here are not of the Q5 but of a car that will soon hit the market as the new Q6. Audi was recently testing the mechanicals for this car and to keep it away from gathering much of an attention; it was using a body shell of the Q5 as a way to camouflage the new car. The fully developed model though, will look nothing like the Q5 and will have a roofline quite similar to the Sportsback models we have seen from the manufacturer. Powering the Q6 should be a range of Audi four-cylinder and V6 turbocharged gasoline and diesel engines. Audi has officially confirmed that it is developing the Q6 and an even better news is that it is also working on a Q4. More on that later.