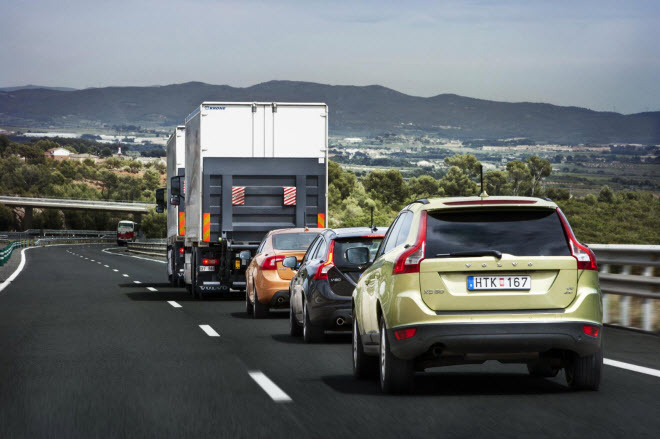 Google isn’t the only company developing autonomous cars. The SARTRE project, or the project for Safe Road Trains for the Environment recently tested a convoy of three self driving cars. This project which is a joint venture among seven European companies (Volvo being the only auto company among these) took these cars along with a self driving truck for about 200km on a highway in Spain for without any incidents. The test was a success taking into consideration the fact that the road was populated by other motorists as well.

There is a slight difference between Google’s autonomous car and SARTRE. While Google’s car is capable of driving autonomously anywhere, the cars in a SARTRE convoy are linked together via wireless communication, with the vehicles accelerating, braking and turning in accordance with the lead vehicle which is driven manually.

The cars in a SARTRE convoy are sent a request from an outside car as a request to join a convoy. Once the car is accepted as a coach in the ‘train’, it can join in, and the drive can thereafter take his hands off the steering wheel. The car will control itself thereon. The test saw the distance between the cars in the convoy vary from 16 to 50 feet, while mostly being 20 feet.

Such a convoy would mean a safer and smoother drive, the developers of the system believe. They also think that the system will make the drive more fuel efficient as the cars will drive at a steady speed, and since they’ll be following each other, there will be no wind drag either.

What do you think? Can such a system be implemented without any hazards across the world? Can the lives of a whole bunch of car drivers be left at the mercy of one lead driver? Do let us know your opinion.