Home Features REVIEW: We test the on road behavior of the Hero Impulse 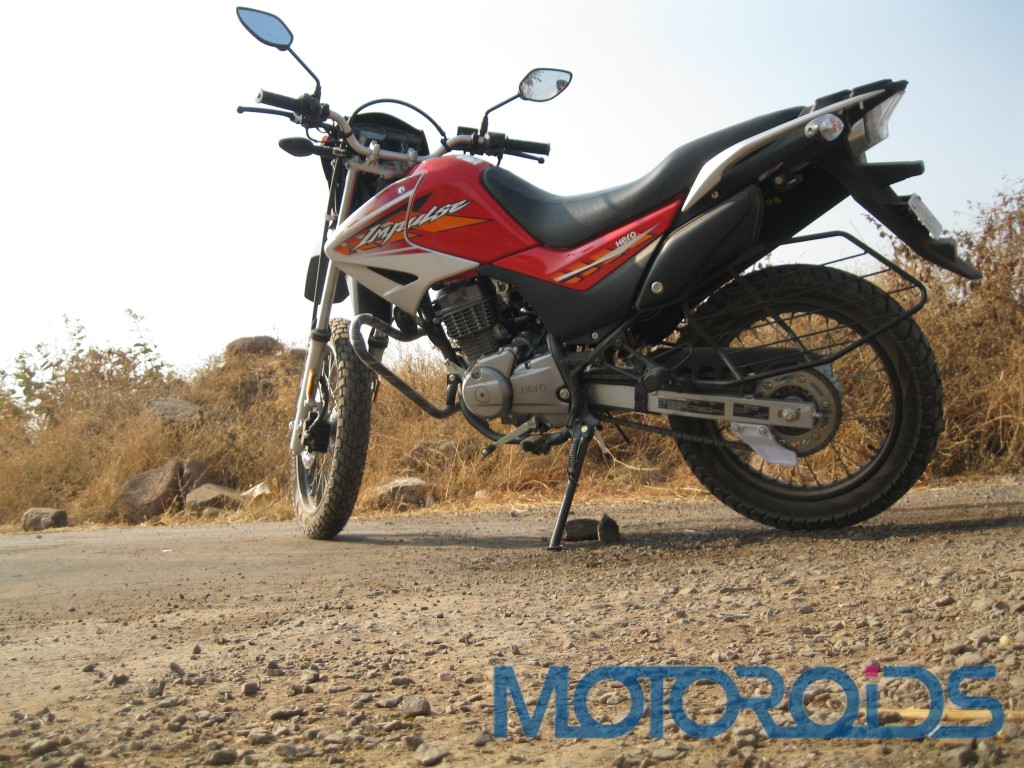 The Impulse is the first motorcycle to roll out of the Hero Motocorp stable after the company’s much publicized break up with Honda. The Impulse was a surprise of sorts, the kind of bike that we could not have thought of rolling out so early from Hero’s factory after their divorce with the Jap partner. The boffins at Hero MotoCorp decided to plonk in the 150cc motor from CBZ Xtreme into a frame that deployed long travel front fork and mono shock set up at the rear. Out went the ‘distinctively commuterish’ image and in came a motorcycle that you would want to ride to your college. Here’s our take on this distinctive, brave first effort from Hero Motocorp

You really have to give it to Hero for the Impulse’s looks. So what if it’s inspired by Honda’s NXR150 Bros, there’s nothing like it on the road. You will be blind to not admire the stylish bodywork on seeing one of these on roads. And just in case you are on an Impulse, take my word, you will soon be getting a lot of admiring glances and second glances at times. The fairer sex will suddenly find you to be the ‘rockstar’ material and your garage will be your neighbour’s envy. Everyone from the nice chap at a fuel station to the ‘lesser mortals’ on road will ask you the cost and ‘feel’ of the bike with the occasional ‘average kya hai?’ thrown in.

This is not surprising as the bike looks very much like a true On/Off roader and the beak shaped high set front mudguard shouts its departure from the ‘ordinary looking’ bikes on road. The spoked wheels look the part and so does the diminutive headlight that does away a separate housing for pilot lamps. The bike has well executed tank extensions that do well in covering a tad tiny fuel tank.

The big & chunky grab handles at the rear merge beautifully with rest side panels. The rear end has to be my favourite with its LED tail lamp, indicators that stick out and a highly upswept exhaust. We are hard pressed to find a flaw here but then, it is our job to. On being really picky, we would like to have a headlight that has a design form unlike the other Hero MotoCorp bikes and the bike can do without those differently painted sections near and on the swingarm. 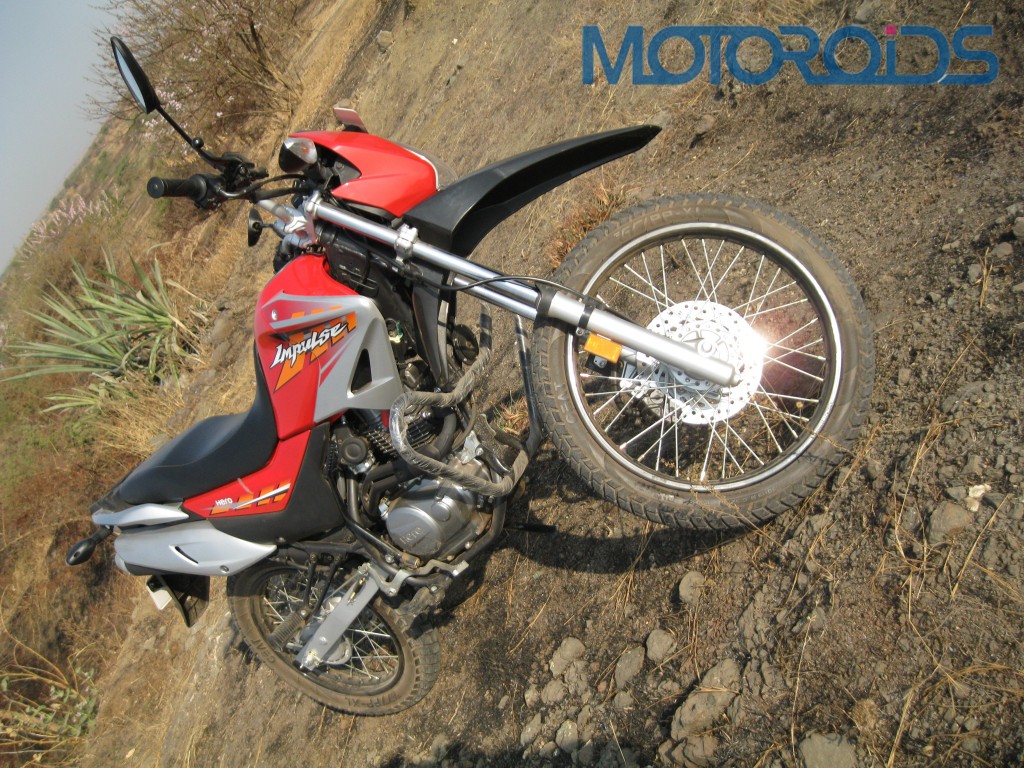 Now comes an important bit as you need to have well thought ergonomics on a bike that you may wish to take off the road. In true Hero fashion, the bike does not get an Engine Kill Switch and that, frankly, is a bit annoying. It is high time Hero should equip its bikes with that ‘red’ switch. What with every other 150cc commuter coming up with it.

Talking about the speedo console, as what seems to be the norm these days, the bike gets a full digital speedometer panel with an analogue tacho. The fonts on both the digital and analogue meters are clear and do their job very well. The digital display also gets a trip meter, a bar type fuel meter and borrows a clock from its elder cousin, the Karizma. The digital console has orange backlight and although there is nothing wrong with it, a white back light would have looked cooler. Coming to the handlebars, it is a bit surprising that Hero decided to not keep the ‘BSA bicycle style’ handlebars as seen on the Karizma and went in for a much shorter unit. However, the handles fall perfectly into the hands and ensure a good riding position.

The bike has its front foot pegs positioned at a place which should allow comfortable commuting along with having no troubles during the occasional off road run. The seat, in true off roader fashion, extends all the way to the top of the fuel tank and allows the rider to explore his and bike’s potential during an off road run. The seat is very well padded and offers a good support.

Now comes the bad part. The speedo meter cable protrudes on top of the speedometer console and not only is it an eyesore but often blocks the view of the details being projected on the LCD panel. 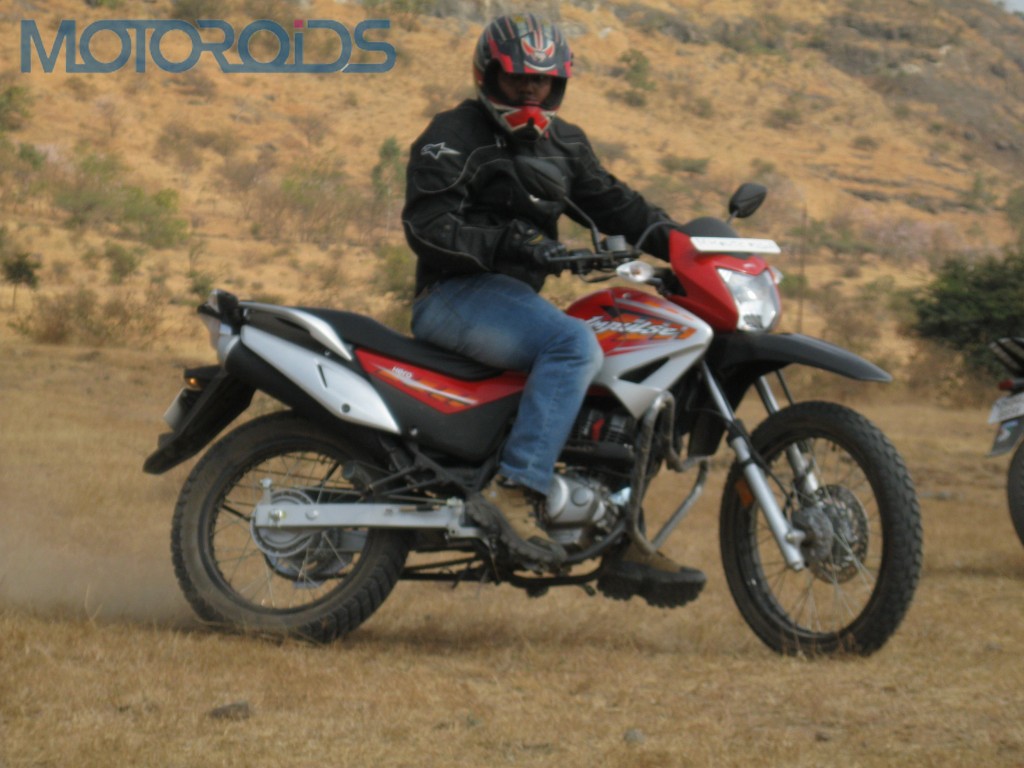 Now comes my favourite part. The performance junkie in me redlined the bike in almost every gear, trying to match up with fast moving Pulsar 220s that were our support bikes during the test ride. The bike is powered by an Air Cooled, 4-Stroke Single Cylinder, OHC 149.2 cc motor that is also found in the CBZ Xtreme and the hunk and pumps out 13.8 bhp of power and 13.6 Nm of torque. The motor, in true Honda fashion is butter smooth and so shift feel between the five cogs that bike allows you to play with. The bike provides adequate power to zip through the traffic and cruise at reasonable speeds (read 60-80 kmph). Anything above it and you are asking for a lot. The Impulse starts feeling anaemic and dislikes high speed runs. The bike loves staying in 2500-6000 RPM bracket and the engine becomes quite gruff the moment you hit anything above 6500 RPM.  Also, this first on-off roader starts feeling a bit underpowered in the top end and overtaking some fast moving traffic has to be a calculated affair. I saw myself downshifting a lot to stay in the power band during these overtaking manoeuvres. We wouldn’t mind a slightly peppier performance on this one. 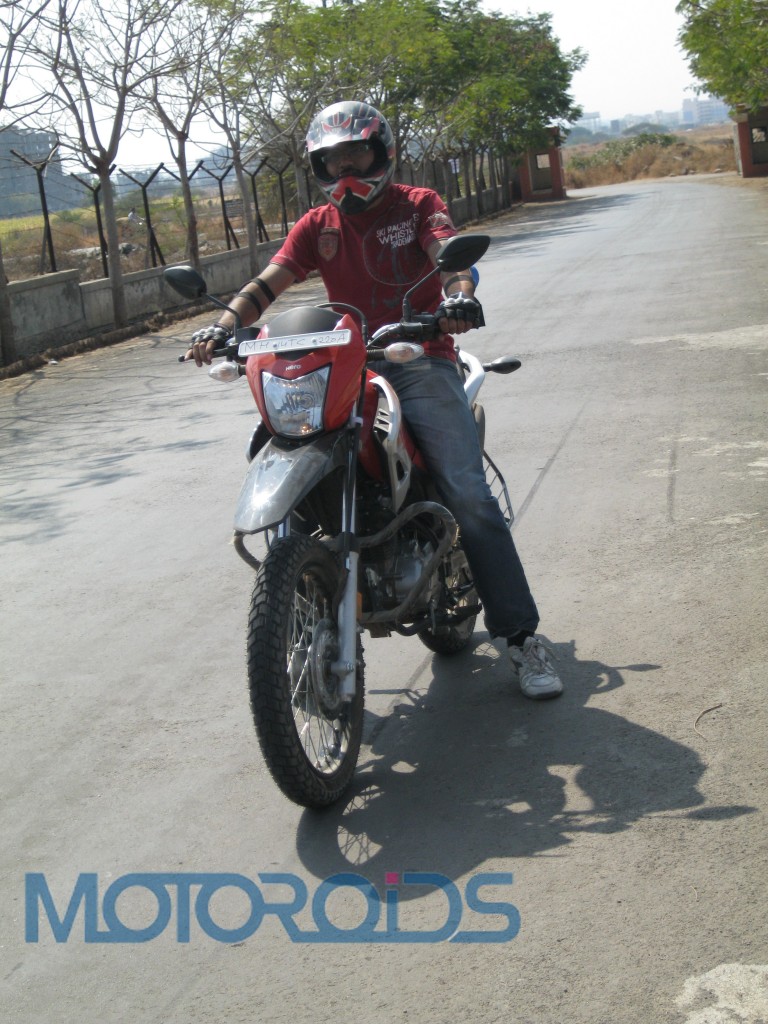 The Impulse, in true off roader fashion, comes with a 17 inch rear wheel and a 19 inch unit upfront. As mentioned earlier, the bike gets long travel front suspension and a mono at the rear. Keeping in mind the off roading aspirations of the bike, Hero decided to give the bike a very softly sprung suspension set up, a little too soft for some. The saddle height compresses and by a considerable amount the moment you put your weight on the bike. A pillion jumping aboard means even more compression on the shockers and a reduced saddle height. However, there still remains enough scope for compression left for the suspension to provide a good capability to absorb every minute undulation on the road and the bike allows you to literally glide over the speed breakers.

The craters are dealt with in a similar fashion and the suspension continues to keep the rider and pillion comfortable without having to work overtime on the ‘typical’ Indian city roads. Talking about the handling, the good chaps at Hero seem to have got it very right with this bike. The bike’s chassis and the suspension setup instil sufficient confidence in on-road corners and allow the rider to explore the bike’s limit. However, and unsurprisingly, the bike behaves very much like a Motocross bike in the corners and the Ceat footwear does not allows enough grip. Hence, no knee scrapers here, not that this machine meant to allow it. Coming to braking, the bike sports a 240mm disc in front and a 110 mm drum unit at the rear. These allow a good feedback and sufficient bite to halt the bike from high speeds without the rider having to suffer some nervous moments. As expected from a bike with Motocross aspirations, the rear seems a tad too eager on road and that saw the rear sliding under some hard braking. 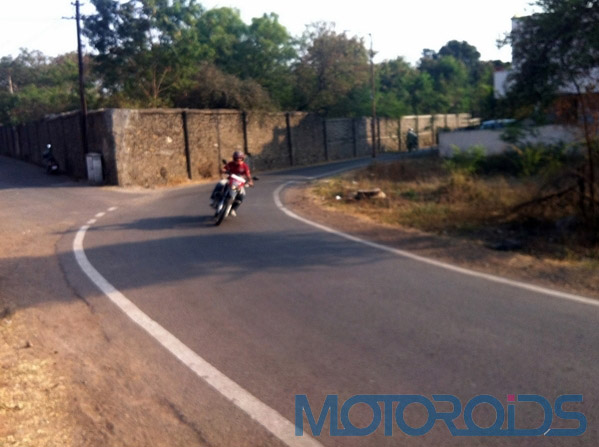 This part of the review deals ONLY with the on-road behaviour of the bike and following is the link to our off road experience with this bike. The bike retails at about Rs.70000 on road in Pune and at this price, there sure are numerous options. However, we can safely conclude that this bike makes sense even if you decide to use it to ride to the office and the bike won’t often get to deal with dirt or no roads. That said, more power is sorely missed and we would like to have Karizma’s 223cc mill in this bike. Are you listening Hero?