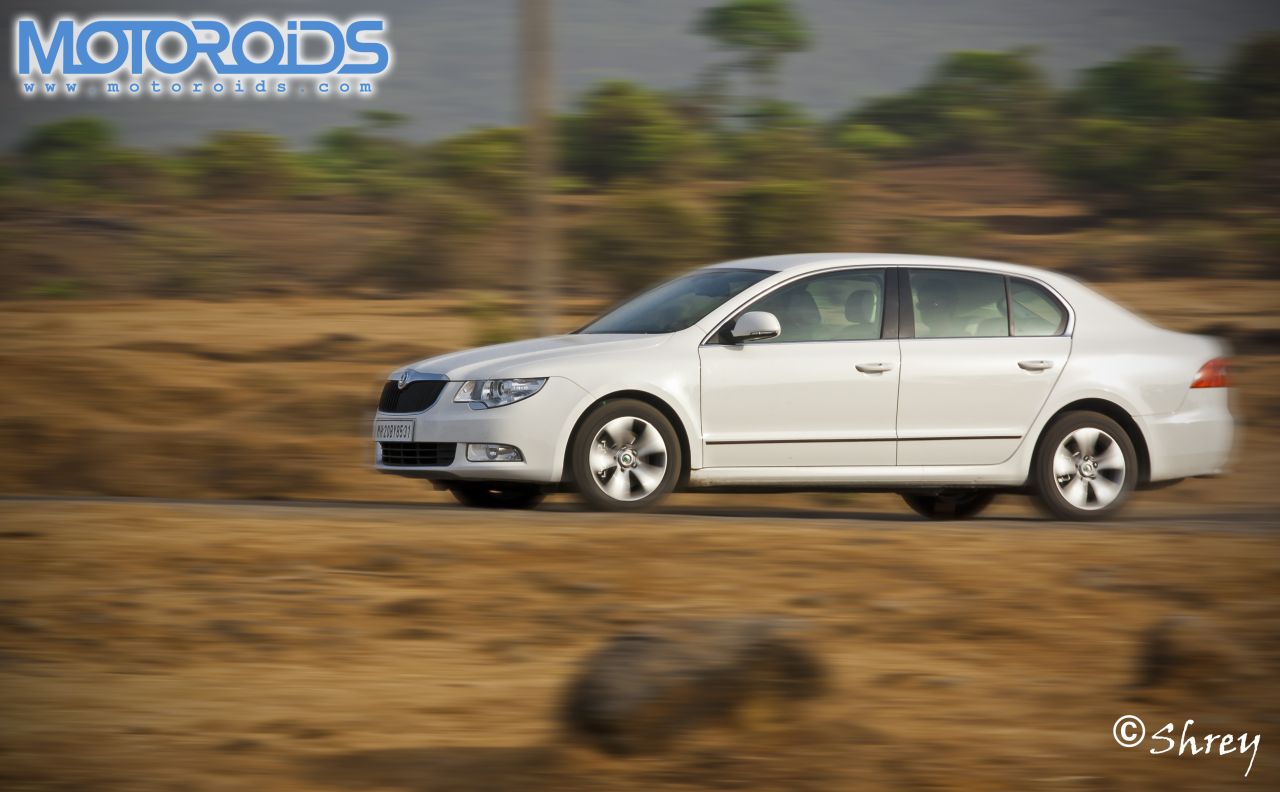 It’s beyond the realm of contention that the Skoda Superb is arguably the best car to buy in the Rs 20 lakh D segment. It offers incomparable legroom, great interior, a whole range of toys to play with, impeccable safety features, great dynamics, powerful and efficient engines along with an automatic transmission to die for at a price which reminds you of a clearance sale. Unfortunately, even at that price, some guys get heartburns when they have to contend with a car from a segment below for not being able to extend the already outstretched budget that wee bit. 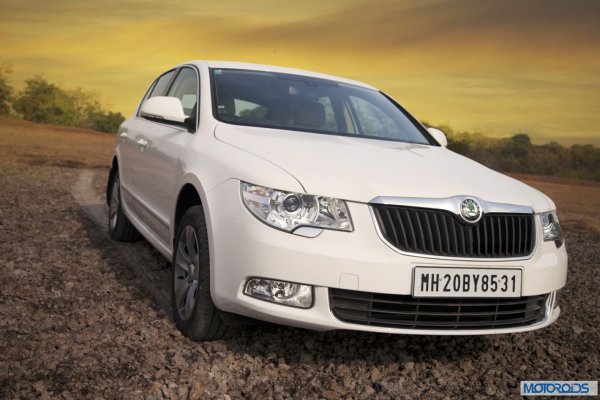 Skoda has answered the ‘ambitions’ of all such blokes with the newest cut-price variant of the Superb. The new variant, christened Superb Ambition offers the luxury car at a price as much as Rs 3 lakh less than the top of the line variant. We recently drove the 1.8 liter TSI petrol version to figure whether the Czech carmaker has stripped the car of all dignity in a bid to make it more affordable. We’re glad to announce we were wrong.

As one would assume, the Ambition variant of the Superb is meant for the aspiration customer, someone who is slightly short on the budget to go the Full Monty. From the outside, the Ambition variant doesn’t give itself away, so you don’t lose any visual brownie points. To tell the Ambition from a more premium Elegance variant, one would have to look at it from the top, where the absence of the sunroof would give the lower variant away. 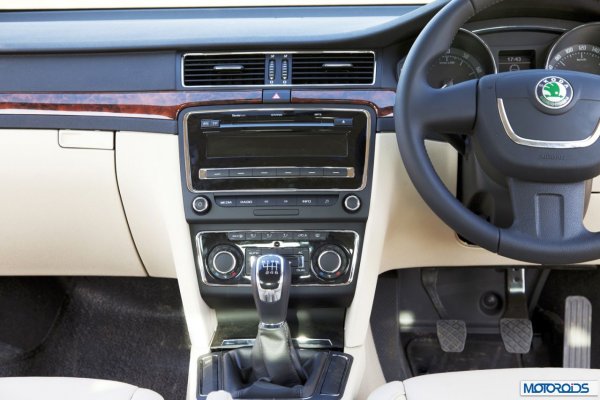 More visible giveaways, however, can be found within the cabin. Skoda have taken away the brilliant 7 speed dual clutch DSG transmission in favor of a six-speed manual unit. That difference alone contributes majorly to reduce the cost of the vehicle. Cost aside, the DSG automatic also adds liberally to the luxury, technology and performance of a car. Its absence automatically makes the car less luxurious and much less convenient for someone who has savored the sumptuous automatic version of the transmission in the past. Having said that, the technologically advanced TSI mill goes a long way in ensuring that the creamy smooth, linear power deliver and ample power does its part to try and make up for the lost brilliance of the DSG. And it succeeds a fair bit too, but more on that in a bit.

Apart from the DSG which is conspicuous by absence, there are other discreet omissions which have done their bit to take the price of the Ambition variant down. Skoda have taken out the six-CD changer, made redundant of late by the emergence of the USB audio port in modern cars. Unfortunately, no variant of Superb supports USBs, and so is the case with the lower priced Ambition variant as well. What remains is the Skoda Swing audio player with single CD player functionality, and an Aux-in port. Even the data card reader available in the Elegance variant is not available here. No Bluetooth either, if you were wondering. The 6.5 inch LCD TFT Colour touch screen too has been taken away in favor of buttons to control all functions.

As mentioned earlier, the sunroof has been replaced with a hard metal top, so no craning the necks out for kids on the Ambition variant. The steering mounted controls have disappeared, but the immaculately crafted steering wheel itself remains leather wrapped and is one of the best in any segment to hold and operate. The flappy pedals seen on the Elegance variant are also absent, but they won’t be of any use anyway with a manual transmission. There is no Cruise Control either, but I am yet to meet someone who has ever been able to use the feature consistently in Indian driving conditions, expressways included. You’ll also miss the push button start feature if you think it’s of much use, we, incidentally think otherwise. 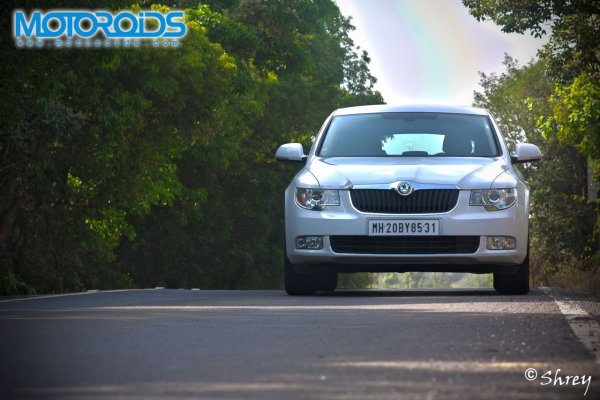 You have to give it to Skoda that they have not taken away any of the key safety features from the Ambition. It still is one of the safest cars to travel in with eight airbags, ABS with EBD, Anti Slip Regulation (ASR), an electronic differential lock for that added grip and control, Active Front Head Restraints and Traction control. You also get parking sensors, and a reasonably powerful halogen projector headlamp. So what have they taken away you’d ask? Well Skoda have removed the magical Adaptive Frontlight System (AFS) which makes lamps swivel in the direction the steering wheel turns for better road illumination. The bi-xenon power has also been replaced with vanilla Halogens. Electronic Stability Program is another important omission. Tyre pressure monitoring and Hill Hold Control are two other features that have been removed. 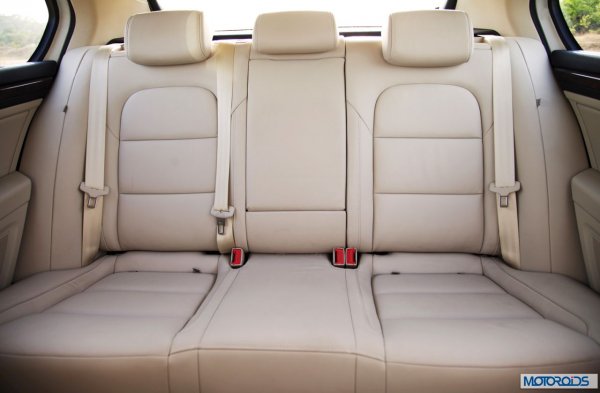 But there is no taking away the plushness of the interior, the amazing dynamics, the wafty ride quality and the incomparable legspace. Like always, I was floored by the linear, yet potent surge of power from the silky smooth TSI petrol unit of the Superb. The engine has enough juice at lower rpm range as well, but it’s only after 4000rpm that you get that intoxicating gush as the machine leaps forward – it’s a beauty of an engine, and the power delivery is surprising to say the least for its size. The 1.8 liter unit dishes out 160PS of power at 4500 rpm and 250 Nm of peak torque at a really low 1500 rpm.

As we traversed the windy roads leading up to Lonavala on the expressway, and later crossed the picturesque twisties on the way to Aamby Valley, we realized that the Superb delivers a mind boggling mix of great ride quality and reassuring dynamic ability. Incredible pliant and sure-footed for a luxury sedan, especially in its price range, the Superb feels slightly squishy only when you push as if it were a sports sedan around fast corners. Having said that, there is no reason why anyone should complain about the comfort or sure-footedness of this cut-price limo, especially after taking into consideration the kind of job its cut out to do. Impressive is the word!

All in all, the Ambition variant may not have some bells and whistles, but it doesn’t lack even a teeny bit in terms of snob value, especially to the onlookers. So if arriving in style matters more to you than an outstanding automatic transmission, then you should probably not think twice before putting your money on this baby. Except for the DSG, you won’t miss any of the other omissions much. If, however, you appreciate performance, convenience, and technology more than street presence, may we recommend the Laura 2.0 TDI with the yummy DSG for the same price, 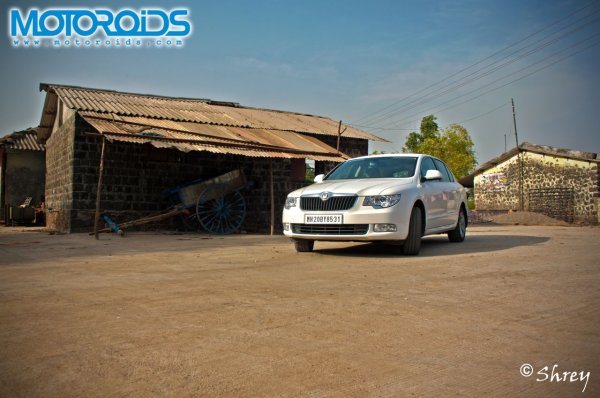 Great space, comfort and luxury
Loaded with features even after several omissions
Great value for money
Negatives
No automatic transmission
No USB port