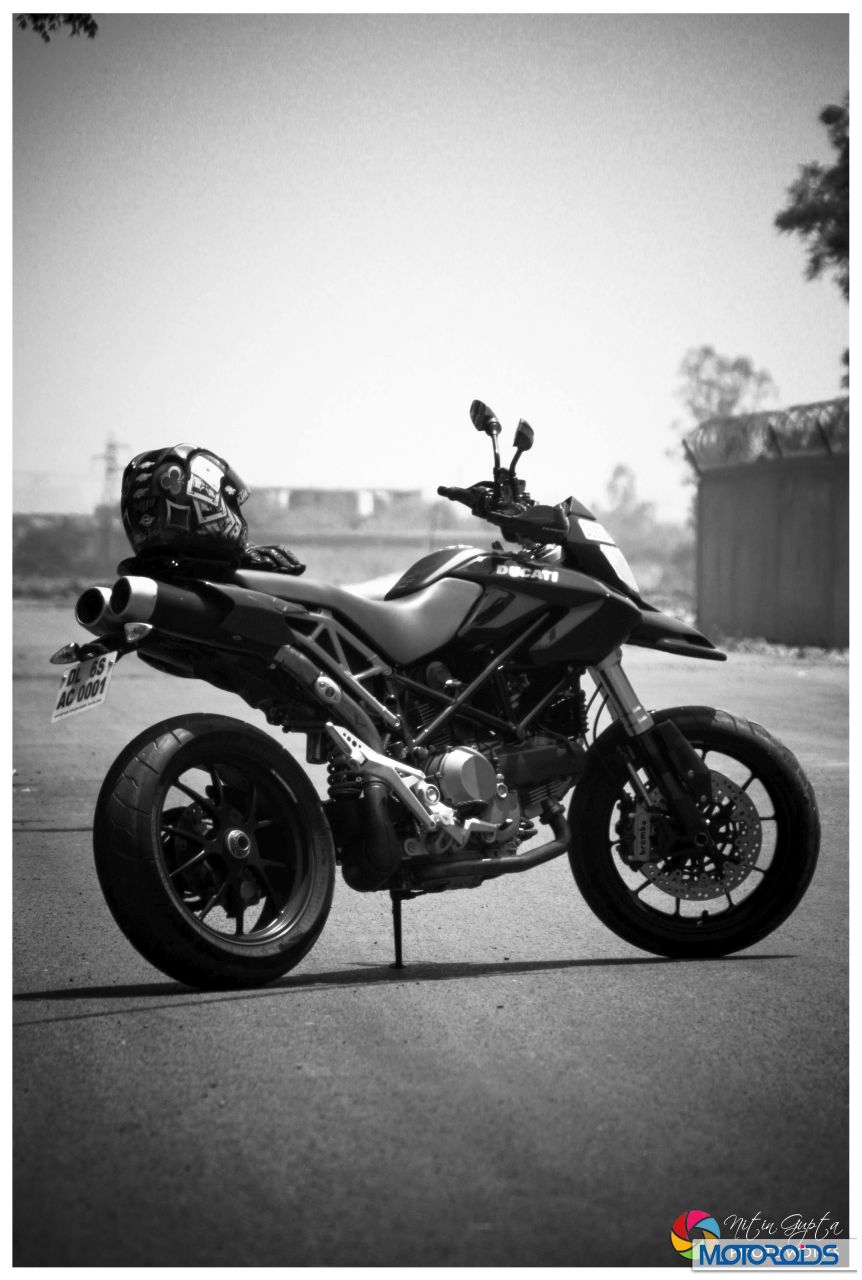 Our man behind the lens in New Delhi turns into a freak on a bike’s saddle. The stunt and speed loving demon is so fast on his machines that people sometimes don’t even see him as he passes them. Happened with me as well, once – I never realized and he just vanished. Almost magical!

Nitin Gupta, as we know him, recently managed to lay his hands on the Ducati Hypermotard 1100S. Here’s an account of what he thought the bike felt like. 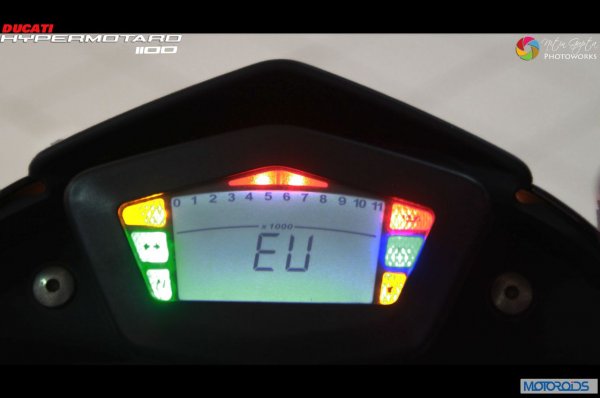 The first thing you’ll observe once you get on to the saddle of this Italian beast is the tiny instrument console, somewhat resembling the one on the KTM Duke. The instrument console is flanked by fancy looking flip out mirrors. While they look cool, I didn’t find them of much use, except the fact that their excessive height makes it easy to make way through the traffic as you don’t have to bother about the relatively low ORVMs of cars. I quite liked small details such as the neat LED tailpiece and LED Indicators. The headlamps were quite effective too. 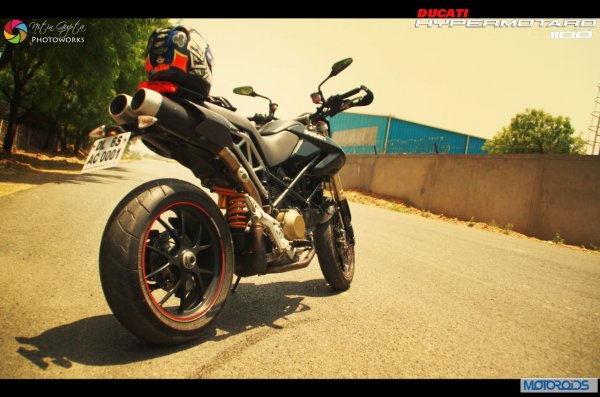 The tall saddle makes the Hypermotard a little difficult to ride for the average heighted Indians, but on the flip side, takes the rough Indian roads in its stride with aplomb with its high ground clearance. 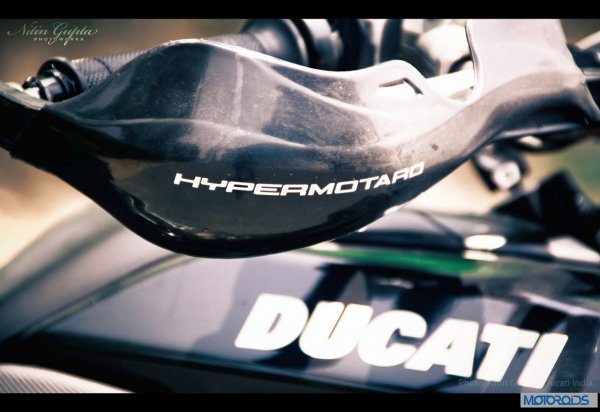 A rigidly triangulated Trellis frame and track-tested chassis geometry is matched with state-of-the-art suspension. Up front you have exceptionally composed and huge 50mm Marzocchi forks, gripped by a triple screw lower fork crown. The suspension duties at the rear end are taken care of by a fully adjustable Sachs shock mounted to a stout single-sided swing-arm. The ride quality is acceptable for such a bike, though it’s not push by any measure. Riding with slightly low air pressure helps improve the ride that wee bit, and also improves traction. The ultra soft single seat goes a long way in making the ride a bit cushier. 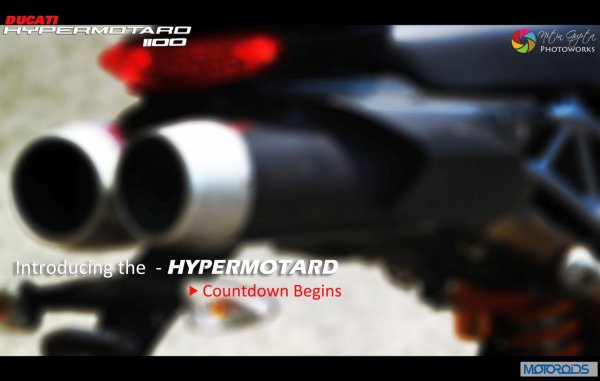 The power on tap is easily more than what you require from this air-cooled supermoto. If you have ever seen the famous photo of Ruben Xaus sliding the Hypermotard with his knee down while also nonchalantly raising his left hand for a thumbs-up, you’d know what this baby is capable of. I’d recommend you search that image on the web. You have to go easy on the throttle, as the wheelspins come thick and easy on this one. Be careful, or you’ll land on mother earth with a thud from a height you’re not used to. That said, if you want to do a knee down, you can do it, and you want to attack a corner in typical supermoto fashion, you’re good for it. The good thing is, even if the rear end breaks traction, the supermoto gives you a chance to counter steer and get back in control.

The Hypermotard rewards riders who appreciate its character and ride it the way it’s meant to be ridden. The 95 Italian horses make light work of galloping through straights. Engine heating is not an issue even in city traffic. The gearshifts aren’t a highlight though and downshifting is an unpleasant experience to put it mildly. The vibes and clanks while stepping down a cog spell crudeness.

I achieved a top speed of 160-165km/h in the third gear before the limiter cut in at about 10.5 kays. The power delivery is very linear with no spikes across the band. Ample tractability is available from 2000 rpm. You can run it in higher gears at low speeds without any spluttering.

Wind blast, as you’d reckon is an issue, but who are we kidding here? It’s no secret that wind is always going to be a problem with a naked – it’s up to you to take it or leave it. The white back-lit display provides an extensive amount of data including speed, revs, time, oil temperature, battery voltage, A & B trips, fuel reserve trip and scheduled maintenance. Warning lights illuminate for neutral, turn signals, high-beam, rev-limit, oil pressure and fuel reserve. In addition, it can list recorded lap times by using the high-beam flash button as a stopwatch.

While I liked my brief stint with the Hypermotard, I also realized that this is not a bike for the usual rider. It’s got a different stance, a different character and a different behavior. If you know what to expect from it, it’ll reward you. But it wouldn’t think twice before throwing you off its back if you try to think of it as a proper supersport. It’s rather easy to ride, but it’ll require some really special skills to extract a hundred percent from it.