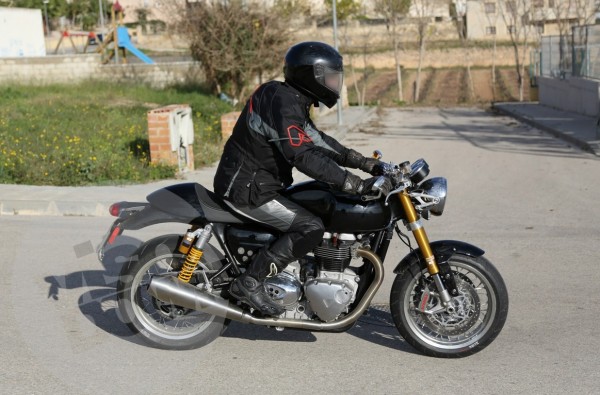 Two new retro-styled Triumph motorcycles have been spy snapped near Barcelona in Spain. Courtesy VisorDown who have spotted the bikes states that there are two variants of the Cafe Racers i.e. a standard and an R version- the one show in the image above.

The engine is said to be an all new 1100cc liquid cooled parallel twin expected to pump around 90 bhp. With radiators mounted between the cylinder and the exhausts, the fins on the engine seem to be for that classic appeal. Though nothing much has been said about the standard variant, the R version of the motorcycle gets a beefy Ohlins front suspension borrowed from the Speed Triple R with adjustable pair of Ohlin twin shock aborbers at the rear. Braking duties are taken care by Brembo twin discs with radially mounted four piston calipers. ABS will be a standard feature on both the bikes. Also the R version comes with a single cafe racer styled seat.

The two motorcycles are speculated to be badged as Speed Twins or might get the Street Tracker label which has been trademarked by Triumph. This seems to be good news for riders who wished for something more sporty and powerful motorcycle than the Thruxton (the new bikes make 22 bhp more) and a better hardware’d spec chart. Both motorcycles are slated to go into production in 2016.