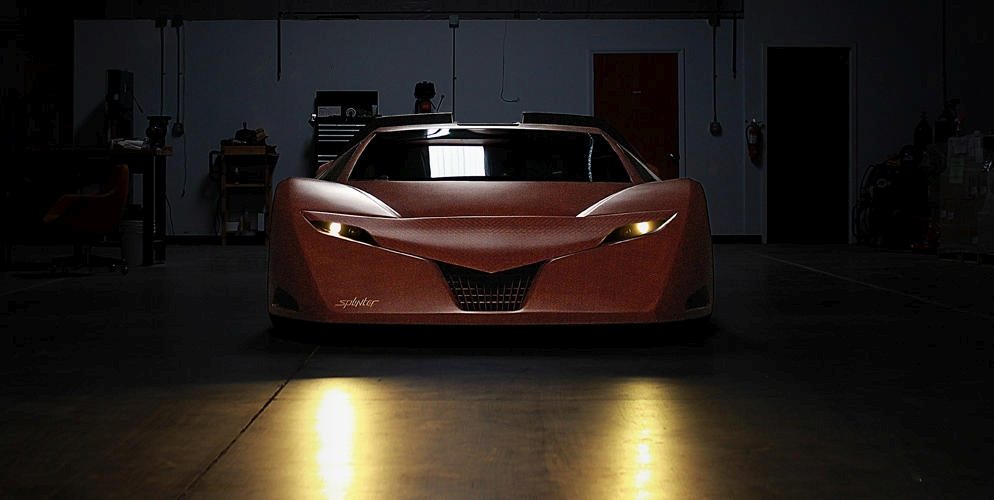 What happens when you give a ton of wooden composites, laminated wood veneers, wooden arms and springs, wooden wheels and a small block 7.0 liter Twin-supercharged V8 powermill to a guy named Joe Harmon? He builds world’s first high-performance 700 hp wooden supercar out of it, and calls it the ‘Splinter’.

Started as an ambitious graduate school project at North Carolina State University in 2008, the Splinter pushed the line on the perceived limitations of wood as a building material.  The project fulfilled the designer’s dream of designing and building a car from scratch. This year marked the completion of the project and the Splinter was showcased at the 2015 Essen Motor Show. 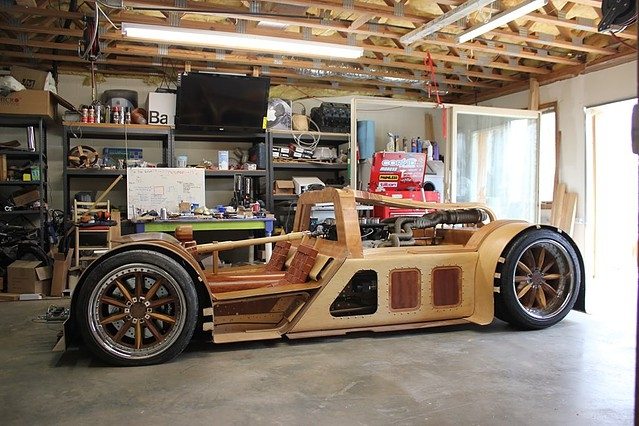 The Splinter is inspired from the ‘de Havilland Mosquito’, the fastest piston-driven aircraft from the World War II era. Dubbed as the ‘Wooden Wonder’, the British multi-role combat aircraft was powered by a pair of Rolls-Royce V12 engines and was made almost entirely out of wood. Similar to the aircraft, the high performance Splinter is built from a combination of laminated and bent wood veneers, with a bodywork of woven veneer. 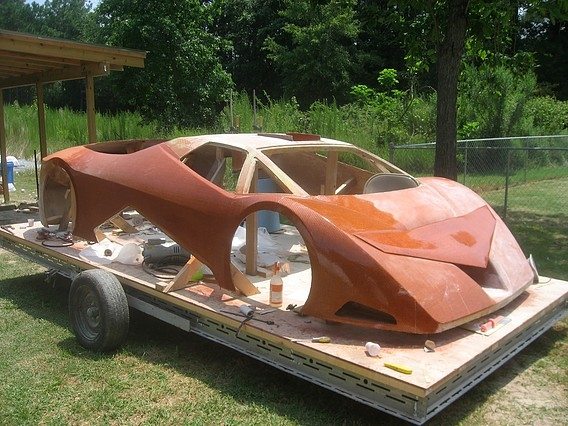 With a goal to use wood in every application in the construction of the car, the team built the body, chassis, suspension components, wheels and interiors from wood. Almost all components were created through custom moulds which were then shaped with precision and then fitted together to build the structure. At 1345 kgs Splinter is claimed to have a better power-to-weight ratio than steel and aluminum vehicles. 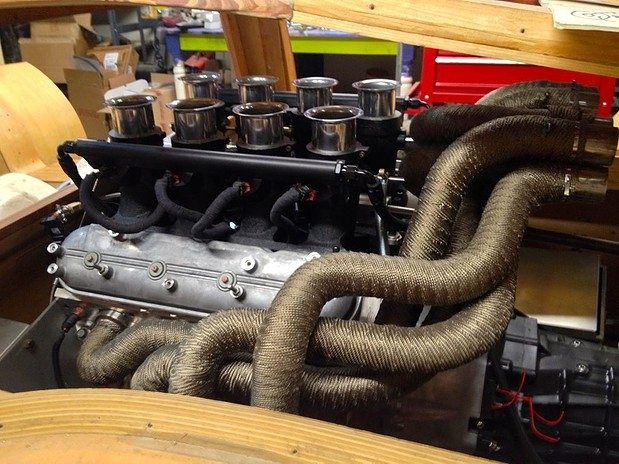 As for the body design, the team designed and built two looms by weaving strips of veneer into a cloth-like material.  The compound curvature on the Splinter was achieved by woven cherry skins, and end grain balsa core. 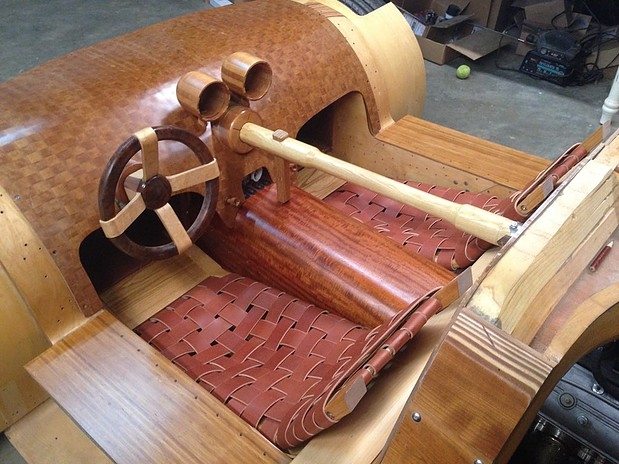 The Splinter drives on Michelin Pilot Sport tyres fixed on three-piece forged aluminum rims with laminated wood centers. Each wheel is built with 275 individual pieces. The outside face is covered by walnut sunburst and a cherry sunburst on the inside. All the pieces of wood were bonded together with the help of various adhesive compounds. 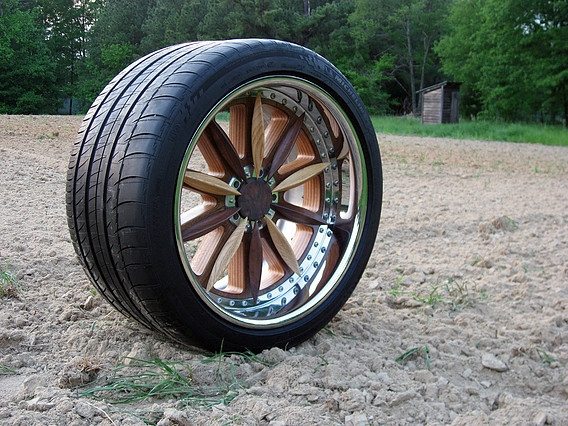 On the project, Joe Harmon said that the combination of Splinter’s weight, shape, powerplant and transmission is capable of reaching speeds of up to 240 mph (386 km/h), but the car is unlikely to be put to the test in this regard. He further added,“Practicality is a minor deal, I don’t know how many 700-horsepower supercars are practical. It’s about style and performance and this car will have all that in spades. This car will not be a grocery getter”

The power figures of the Splinter are not out yet, since the maker seems to be hesitant to put it to the tests. So for now we have to be stay happy with tech specs only. 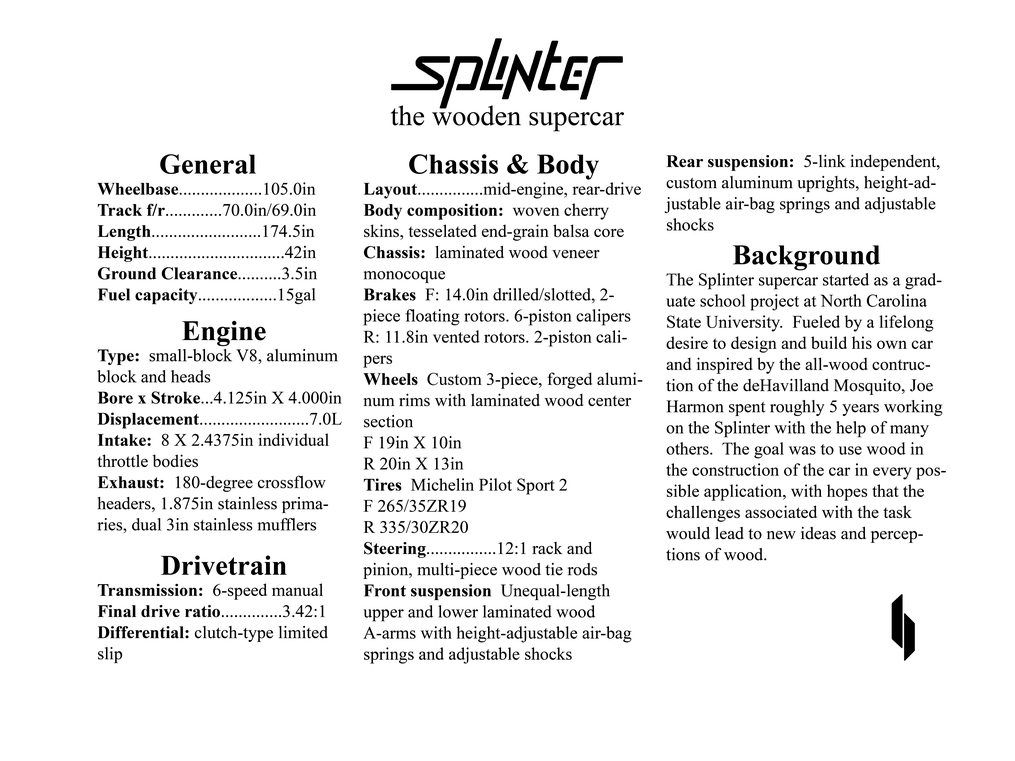 Check out the Gallery for more on the Wooden supercar, Splinter.