Making a grand entry in the Indian market with a brand new SUV, Kia, has been testing their first car for quite some time now. Time and again, we have posted spy images of this upcoming car, revealing new details every time. We have managed to capture another set of images of this SUV, which reveal a striking new detail. As you would see in the images below, this Kia test mule sports red brake callipers on the front. Most of the times, car manufacturers add touches like these to differentiate their sporty variants from the regular ones. This test mule, could very likely be using the more powerful, 1.4-litre turbocharged petrol engine the car is rumoured to come with. 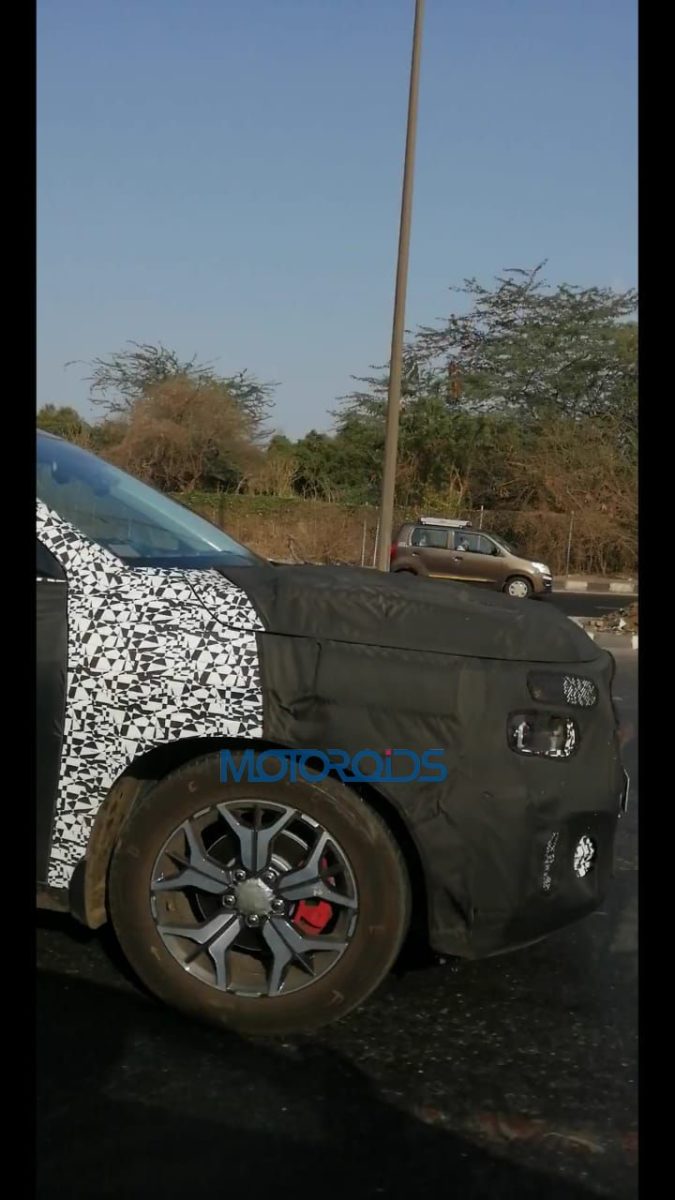 Rumours suggest that the SP Concept based SUV would be offered with three engine options – a 1.5-litre petrol, a 1.5-litre diesel and a 1.4-litre petrol. The latter engine is supposedly the most powerful one in the lot. This motor is also expected to be offered with a quick shifting dual clutch transmission with paddle shifters. With a significant power difference, and perhaps even a cost difference, Kia might offer sporty exterior touches to this variant, including the red callipers in the front. However, it is interesting to note that only the front callipers were painted in this shade. One can also spot the projector present in the headlight assembly of this test mule.

To be launched in the second half of 2019, Kia has released some initial design sketches of the car some time back. We can confirm features like a clamshell Bonnet, disc brakes on all four wheels, a tiger grille, bonnet mounted DRLs, projector headlamps and three adjustable headrests in the rear will be offered when the car is launched, from the spy shots seen earlier. On the inside, Kia shall be offering a floating type screen which is expected to come with Android Auto and Apple CarPlay connectivity options. Linked below is a video, showcasing this display on the car, do have a look and stay tuned for more news on Kia’s debut car for India.