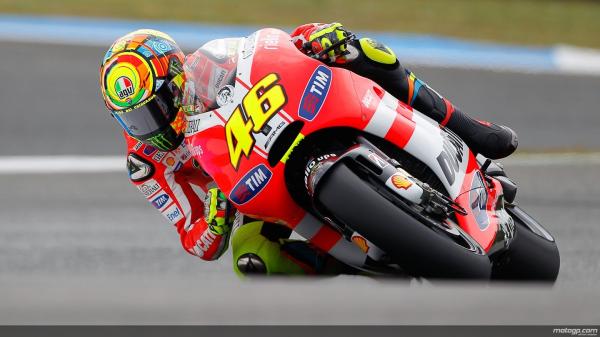 VALENTINO ROSSI does not seems to be too confident with his chances of battling for the 2012 MotoGP championship. Lining to the clouds is that he hopes to a lot get closer to the leaders this season. It may be noted that Rossi had failed to win on the Ducati Desmosedici in 2011. Speaking to media persons at the annual Wrooom event at Madonna di Campiglio, Rossi said: “The championship is difficult because the gap in 2011 was quite big.Our target is to fix problems step by step, and try to come closer to Yamaha and Honda. And from that moment, start to fix all the details, to be competitive for the victory.” He further added: “I do not want to say from the start that I cannot fight for the championship, but I have to be realistic.” Speaking about the post-season test at Valencia, the Doctor said: “In the end there was 1.5 seconds we have to recover, and our target is to get close to the others and be able to race with them and fight with them. This is our goal.I think that the first test will be important, and for sure the bike will be different compared to last year. It is impossible to be competitive from the first test, but I think we will have some good information to work with, and be ready for the first race.”

The maestro also commented on his physical form,“Today I am in shape physically, and we have two or three weeks ahead of us. I am ready for the first test. It is nice to work with Ducati, even if unfortunately the results have been under our expectations. The atmosphere is nice and we all believe in what we are doing.”

I and thousand others are hoping that the Doctor ends up at the place best suited to him i.e. at the top of the podium. Fingers crossed.