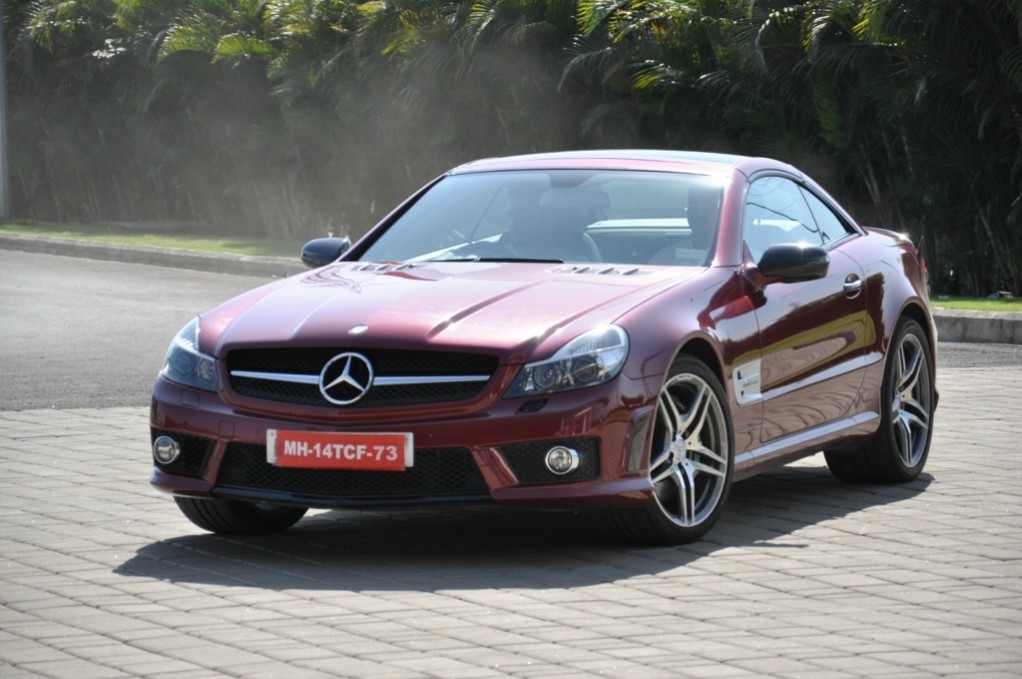 Images: Bunny Punia
As our regular followers would know, the SL63AMG that you see here in these images will soon be replaced by an all new, 2012 version of the car. We recently showed you the official images of the new SL63 AMG, the car which will soon replace the current model in Europe later this year, and will probably make its debut in India by late 2012 to early 2013. That however, doesn’t take away even a single atom of our willingness to drive the sexy looking current SL63AMG when given a chance. 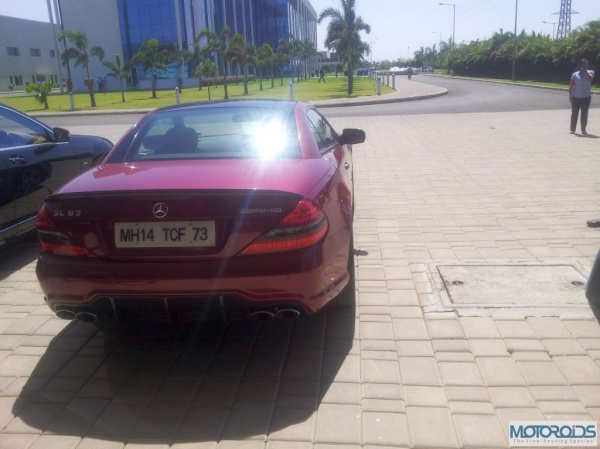 This testosterone injected version of the SL roadster is one of the most powerful models in the entire AMG lineup, and is renowned for its stunning looks and equally amazing performance. Powered by the 6.3 liter naturally aspirated V8 the Sl63 reeks speed, performance and aggression. The V8 powering the SL63 also propels the C63, albeit in a different state of tune to produce more power. Even with the same engine as the C63, the SL63 produces about 75 bhp more.

There are many differentiators between the AMG SL and its humbler SL350 avatar. The front end, especially the snout has a pronounced wedge shape. The radiator grille is painted black, the cooling intakes are much bigger and the lower fins are painted in black too. Bi-xenon headlamps with their dark edges and largeer fog lamps pushed closer to the flanks in chrome surrounds emphasize the vehicle’s width. The ORVMs are different too with LED indicators and a pronounced arrow shape. The most eye catching details on the SL63, though, are the matt-silver-painted AMG trim panels on the front wings with “6.3 AMG” lettering. Finally, you have the AMG side skirts and the large black diffusor insert at the rear. Two sets of twin chromed tailpipes and the AMG spoiler lip on the boot lid finish the exclusive package. 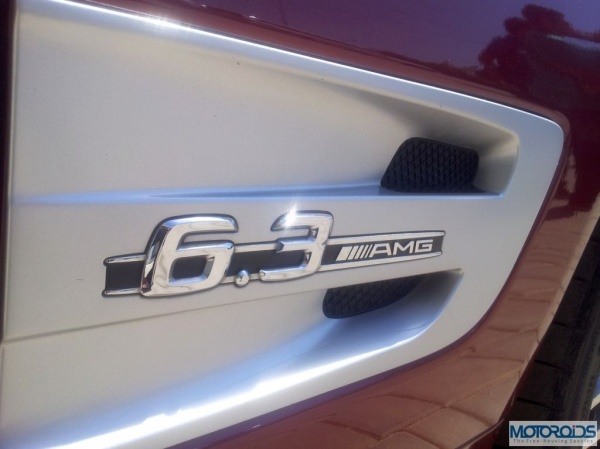 Twist the ignition key, and the engine howls to life, a hungry beast yelling, ready to devour whatever comes its way. The noise from the exhaust would titillate even the numbest nerves on your body. As you rev harder you hear a fluttering sound, as if the four tail-pipes aren’t big enough to let out the fury of that monster breathing 6.3 liters of fire in every stroke. You are simply surprised to see how much visual and aural drama this car carries along as it moves. The SL63 is as much a celebration for your eyes and ears, as it is for your speed and thrill gauging senses. The C63 AMG can be compared with a gymnast, a great performer with no visual drama and extremely precise in its moves. The Sl63, on the other hand, is a Samba dancer, dressed in her traditional skin revealing robe with moves to make your mind go numb. It’s flashy, it vocal, and isn’t ashamed to announce its arrival. 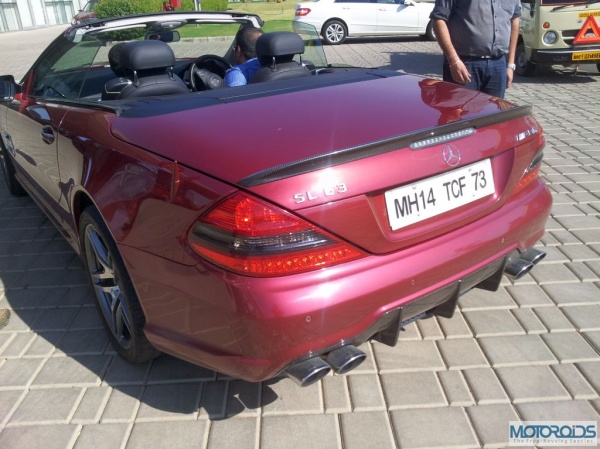 Behind the wheel, this hardtop convertible feels like a low, wide and extremely well planted car. I am done with comfort mode long back, so I turn the knob to S+ mode straight away. And boy, does this baby move and make a noise. The sound from those big bad exhaust pipes is violent enough to make unaware pedestrians gasp, shudder and fall. Pedal to the metal, wind in your hair, that delightful sound of the engine echoed by an equally blissful exhaust note, life suddenly starts feeling good. All those of you who have problems in life, here is a substitute for alcohol. On an open stretch of road, it will give you a high you have never experienced before. 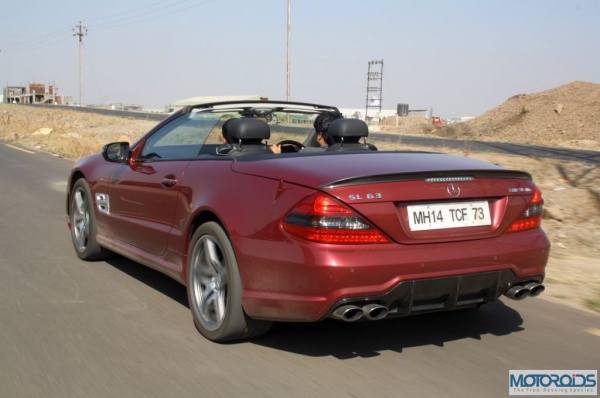 The gearshifts are relentless, with the transmission making sure that the furious engine growl never softens down. The wheelspins are even more violent than the C63 and the same bend where the E63 gave me the heebie-jeebies, this one just slides elegantly and powers out like a poem. Sitting in a car like the SL63 and finding an open stretch of road transmits you in a different world altogether. A world which a petrol head can call his own, where he can forget his low salary, frustrating work life, family issues and feel the orgasmic effect of what the whole world knows as motoring nirvana. True, there are better cars in the world, but sitting behind the wheel of the SL63, as you go throttle to the max, every gearshift ushers in a dream, of a time when you would be able to drive a car like this… as much as you want, as fast as you want, for as long as you want. And there isn’t anything left to be said once you reach that state… 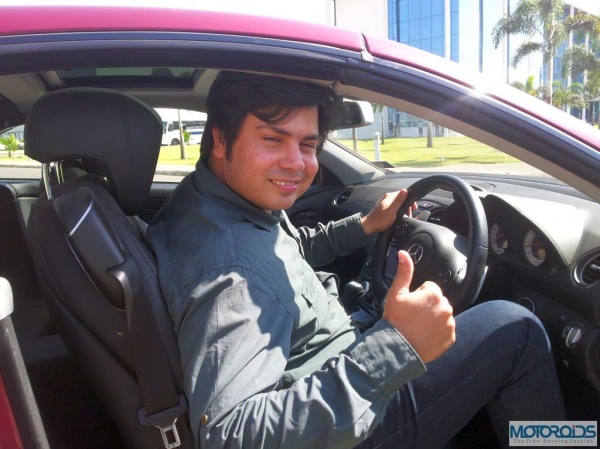