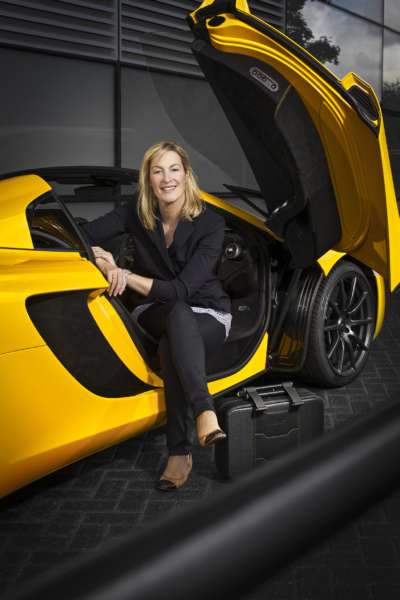 McLaren Automotive has added further strength to its communications team with the appointment of Victoria Macmillan Bell to the role of Luxury Communications Manager. This newly created position will see Victoria seeking to explore innovative brand alignment opportunities and build relationships with non-automotive media with an emphasis on luxury. Following nearly two years with the company as Product and Motorsport Press Officer, Dave Eden has been promoted into the position of Global PR Manager and, on the successful completion of a year’s internship, Adam Gron will remain with the company as Press Officer. All report to Wayne Bruce who moves to a new role of Global Communications Director.

Victoria joins McLaren amid the company’s celebrations of 50 years since Bruce McLaren established, what was to become, one of the most successful teams in global motorsport.

Victoria’s media career began on BBC’s Top Gear and evolved to take in many elements of the automotive arena from road tests to great drives and travel features from Namibia to the Arctic Circle and taking in the Mille Miglia classic race across Italy twice. A personal highlight was achieving a Dunsfold fastest lap time with McLaren Automotive test driver Phil Quaife in a 12C two years ago.

These stories have appeared across many publications including Condé Nast Traveller, Vogue, GQ, Saturday Telegraph and The Independent both in the UK and abroad.

In addition to her vast background in PR & journalism, Victoria brings a wealth of luxury experience to the new role and will integrate luxury brand partners within the fashion, superyacht and travel sectors.

Victoria takes up the role within the press office immediately.

The central PR team is supported by a dedicated PR manager in each region. This team is made up of Amel Boubaaya for McLaren in Europe, Michele Shapiro for McLaren North America, Tom Pryor for McLaren Middle East and Africa, Maxi Polz for McLaren Asia, Masahiro Natori for McLaren Japan and Montgomery Hou for McLaren in China.