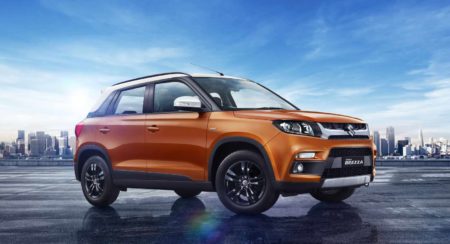 The Maruti Suzuki Vitara Brezza looks substantial from the outside. The front looks aggressive as it employs a chrome grille up front along with projector headlamps and fog lamps for better illumination. The Suzuki vehicle's side profile gets door cladding and flared wheel arches to complete the tough-road image. The car also gets electronically adjustable ORVM with side indicators on both the sides along with body coloured door handles.

The Vitara Brezza gets a wide profile at the back, accentuated with a faux skid plate and horizontally placed tail lamps. Dimensionally, the Maruti Suzuki Vitara Brezza is 3995 mm long, 1790 mm wide, 1640 mm height and it has a wheelbase of 2500 mm. The Vitara Brezza has a strong road presence, and it is one of the most loved sub-four meter SUVs in the Indian market.

On the inside, the Maruti Suzuki Vitara Brezza's cabin gets piano and aluminium finished inserts on the dashboard along with fabric upholstery for the seats. The centre console comes fitted with a touchscreen infotainment system, which is compatible with Apple Car Play and Android Auto. The instrument console gets analogue dials for a tachometer on the left and a speedometer on the right along with a digital display in the centre which provides information regarding time, distance, fuel and much more.

The Vitara Brezza can comfortably accommodate 5-passengers at a time, as the cabin is quite roomy. The steering mounted controls are quite helpful for the driver to toggle between functions of the infotainment screen. The Maruti Suzuki Vitara Brezza also gets a sufficient amount of storage spaces which includes a cooled glovebox (ZDi+), bottle holders, door pockets and 328-litres of boot space.

The Maruti Suzuki Vitara Brezza is powered by a Fiat-sourced 1248cc, four-cylinder diesel engine that produces respective power and torque output of 89 ps at 4000 rpm and 200 Nm at 1750 rpm. Transmission duties are handled by a 5-speed manual and an AMT gearbox. The engine is quite efficient as it is rated for an economy figure of 24.29 Kmpl.

On the move, the car feels punchy to drive and can sprint from 0-100 in 13 seconds. Levels of noise, vibration and harshness are well controlled at moderate speeds. Ride quality is pretty good too and the fuel tank is big enough to store 48-litres of fuel at once. The Vitara Brezza is powered by tried-n-tested mechanical components and is one of the most reliable vehicles in its segment.