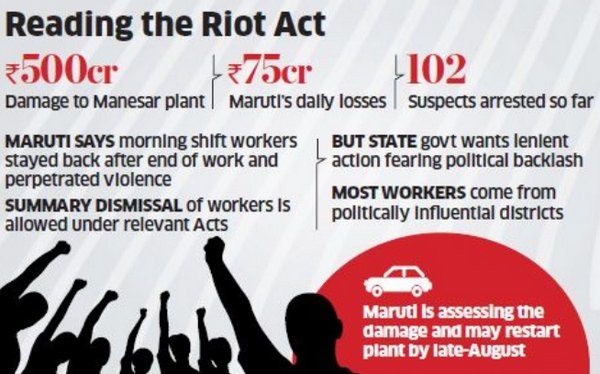 We have been closely following the developments arising from the recent incident of large scale violence at Maruti’s Manesar campus. The unwanted event caused a loss of life, colossal damage to property and suspension of work for an indefinite period. Recently, we reported when Maruti Suzuki India Ltd. appointed a Banagalore based astrologist to have a look at the ‘vastu’ of the affected manufacturing facility. Now, it has emerged that the manufacturer has resorted to vastu correction process to do away with all the negative energy at the plant. It is being said that the manufacturing plant was constructed on a burial ground and as many as three temples were removed from the construction site.

Also, Maruti Suzuki is thinking of firing all the workers belonging to Shift A as police investigation reveals that these were directly involved in the violence. While production at the plant might restart by late august, a part of the management staff isn’t too sure about their safety. One of the officials at the plant said, “My parents are not in favour of me joining the company back. They are worried about my safety. I am happy to work at Gurgaon plant or even in Gujarat but not at Manesar. If I am forced to join work at Manesar, I will have to quit.”

S Y Siddiqui, COO, Maruti Suzuki Manesar plant said that they have been trying to boost the morale of every management official but even then, many from the staff might decide to resign. “There can be some compulsions. While none of them have sent in their resignation, we don’t expect all of them (injured) to join work. As top management, we have to build up their morale. We need to ensure their safety. There will be law and order issue that will be playing up on their minds,” added Mr Siddiqui.