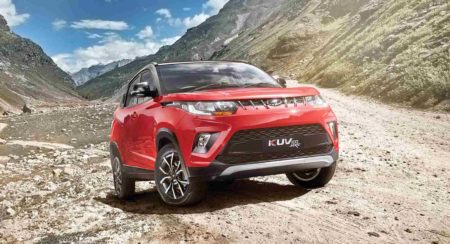 The Mahindra KUV100 NXT is an SUV-ish alternative for the likes of the Hyundai Grand i10 and the Tata Tiago. To accentuate that appeal, it sits slightly high above the ground, gets an upright face with a decent looking grille with chrome inserts, dual-tone roof, blacked-out ORVMs with integrated side indicators and body cladding. The faux skid plates at front and rear add to the soft-road capabilities of the car. Illumination duties are done by halogen headlamps and LED DRLs along with fog lamps which comes embedded into a blacked-out insert. The KUV100 NXT has a turning radius of 5.05 meters and stands 170 mm above the ground. The car sits on 15-inch, diamond cut alloy wheels. In terms of dimensions, the Mahindra KUV100 NXT is 3700 mm long, 1735 mm wide, 1655 mm in height and has a wheelbase of 2385 mm.

On the inside, the Mahindra KUV100 NXT gets a sporty blacked-out interior with some piano black and faux carbon fibre inserts on the dashboard and door panels. The centre console employs a 7-inch touchscreen infotainment system with Bluesense app, navigation, reverse parking camera and much more. It is mated to 6 speakers. The driver can also control the function of the infotainment system with the help of steering mounted controls. The KUV100 also offers the convenience of a seat height adjuster.

The Mahindra KUV100 NXT offers ample amount of storage spaces which includes a cooled glovebox, glass holders, side pockets, under seat storage, sunglass holder, under-floor storage and a 243-litre of luggage space. The car also gets a high-mounted gear lever for effortless shifting of gears. The instrument console gets an analogue speedometer and tachometer along with a digital display which provides information regarding fuel, gear shifts, heat indicator and distance covered. The most unique thing about the KUV100 NXT is the front flat bench though, which can seat three abreast, making the car a 6-seater.

Mechanically, the Mahindra KUV100 NXT derives power from a 1.2-litre petrol unit which develops 83 Ps of power at 5500 rpm and 115 Nm of twisting force at 3500 rpm. The engine comes mated to a 5-speed manual transmission. The car also comes available with a 1.2-litre oil burner which churns out respective power and torque output of 78 Ps at 3750 rpm and 190 at 2250 rpm. The transmission duties are handled by a 5-speed manual gearbox. Both the engines are quite efficient and can return a mileage of up to 18.15 km/l (petrol) and 25.32 km/l (diesel). With a 35-litre tank and those fuel economy numbers, stops between bunks won't be too frequent.