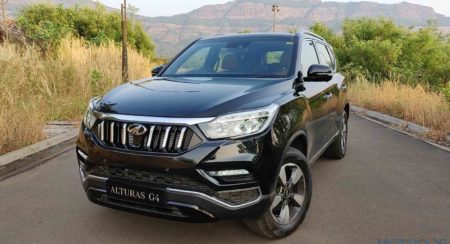 The Alturas G4 is the flagship SUV in Mahindra's portfolio. The SUV is available in two different variants namely 4X2 AT and 4X4 AT. The Alturas G4 competes against the likes of the Ford Endeavour and the Toyota Fortuner.

The Mahindra Alturas G4 is a seven-seater SUV which is based on the Ssangyong Rexton G4. Essentially a rebadged avatar of the Ssangyong, it is 4850 mm long, 1960 mm wide, 1845 mm in height and has a wheelbase of 2865 mm. The Alturas G4 looks substantial and has that presence of typical full-size SUV. It is available in 6 different colours namely Pearl White, D Sat Silver, Lakeside Brown, Napoli Black and Regal Blue.

Upfront, the Alturas G4 gets a huge chrome-slat grille, comes equipped with twin-chamber HID headlamps with dual function DRLs and fog lamps with cornering lights. The Alturas G4 rolls on 18-inch bold looking alloy wheels and gets premium looking elements like blacked out pillars, an electronic sunroof and chrome lining for the windows. At the back, the SUV gets smart taillights adjoined by a chrome strip and a hands-free tailgate.

The Mahindra Alturas G4's cabin is draped in a dual-tone shade and reeks of premium. The plastic and leather quality on the dashboard and door panels feels upmarket and the quilted Nappa leather seats are extremely comfortable for long distances. They provide a good amount of side and under-thigh support. The SUV can easily accommodate 7-passengers, although the third row is good for short to medium journeys.

The Alturas G4 gets features like ventilated seats and Infotainment needs are handled by an 8-inch touchscreen infotainment system which is compatible with Car Play and Android Auto. The driver can easily access the infotainment system with the help of steering mounted controls. The Alturas also comes equipped with features like dual-zone air conditioning, memory function for the driver's seat, 3D around view camera, smart powered tailgate, smart key, tilting ORVM, 8-way adjustable driver's seat, and second and third row A/C vents. The instrument cluster comprises of an analogue speedometer on the right and an analogue tachometer on left along with a 17.7 cm TFT display in the middle which gives all the crucial information regarding the vehicle.

Powering the Mahindra Alturas G4 is a 2.2-litre diesel mill which churns out respective power and torque output of 180 Ps of power at 4000 rpm and 420 Nm of twisting force at 1600-2600 rpm. The transmission duties are handled by a Mercedes-Benz sourced 7-speed automatic transmission. The Mahindra Alturas G4 is rated for mileage of up to 12.35 km/l and comes fitted with a 70-litre tank.

In terms of dynamics, the Alturas isn't a hustler but is a comfortable vehicle on the road when driven at moderate speeds. It rides and handles quite well for its size and can also do a fair amount of off-roading if you get the 4x4 equipped variant.