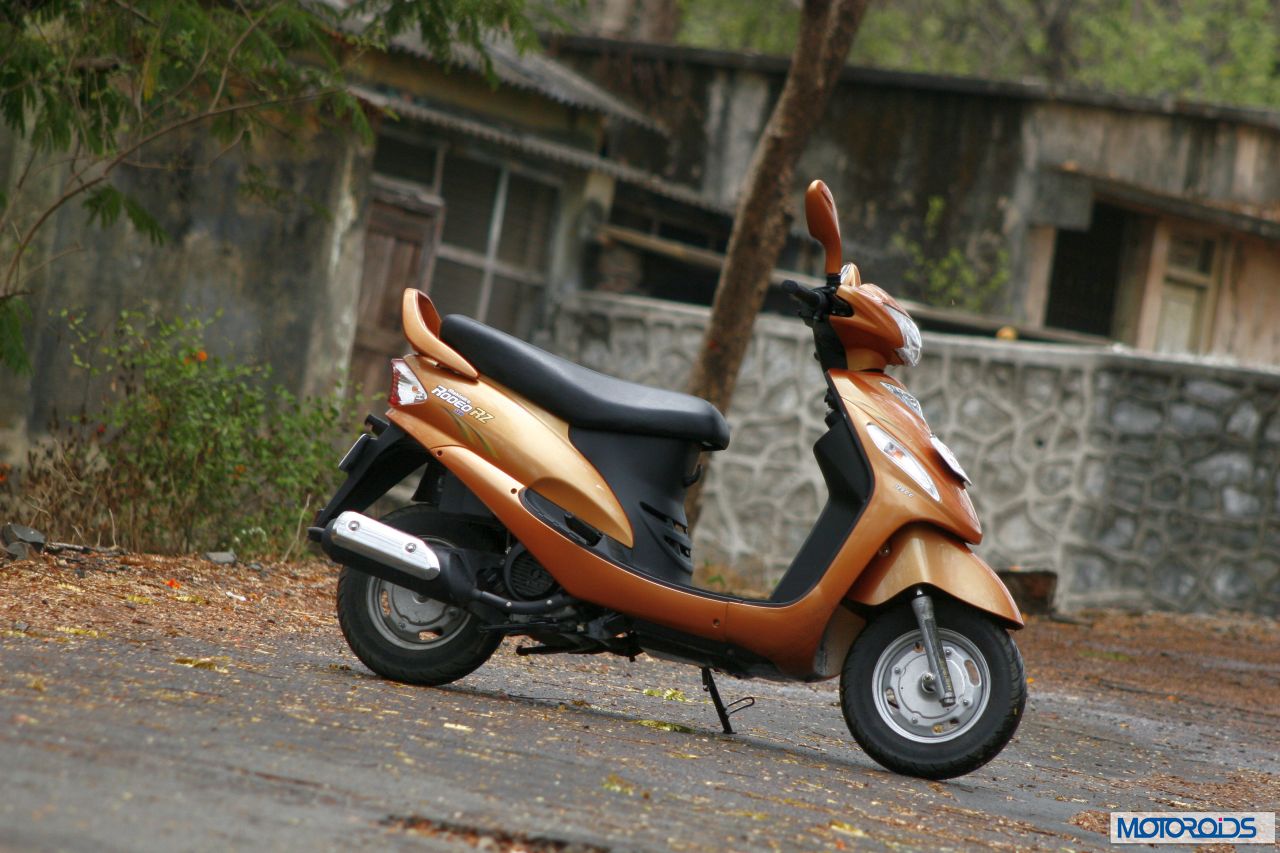 We’re all familiar with the Rodeo – the high on testosterone and style sibling of the hard working Duro DZ. So what’s new with this RZ variant launched recently with much fanfare? More substance, or the proverbial old wine in a new bottle? We just rode the scooter to find out. Here’ a detailed review.

So how does the Rodeo RZ distinguish itself from its previous version? Well, Mahindra haven’t tinkered much with the aesthetics, having kept all the panels and proportions the same. Some new decals, along with a few new colors are the only alterations made in the styling department. The new graphics witness the Rodeo wearing its RZ suffix proudly both at the front panel and at the rear. Partners SYM also have their logo inscribed beneath the Rodeo branding. 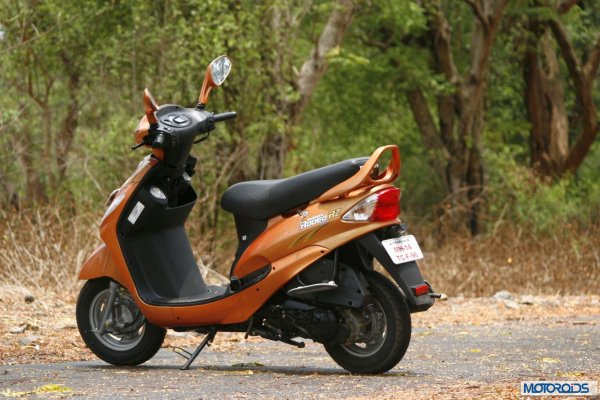 The Rodeo looks like a well propotioned, balanced and agile machine from all angles. No lardy or bulbous surfaces.

Powering this sporty scooter is the same 125cc mill that powered the previous version, albeit with a few minor tweaks. The engine now utilizes dual maps for its ignition system for better fuel efficiency. The carburetor system on the vehicle has apparently been tweaked too for better efficiency. The result is an ARAI certified fuel efficiency of 59kmpl.

Acknowledging the skepticism surrounding the ARAI figures, to their credit, Mahindra organized a real-world fuel efficiency test for the willing riders at the launch. The test comprised burning all the fuel in fuel lines, fitting a 200ml bottle to feed the engine and letting the scooter go with two aboard. In our case, the combined weight of the rider + pillion must have been somewhere around 180 kg. We managed to ride about 6.5km when it suddenly started pouring and we had to run for cover. There still was some fuel left in the connecting pipe, and the scooter could easily have run for another half to one kilometer. Our test run was an epitome of real world riding, including some idling time before the flag off, coping with the inclines within the Filmcity, negotiating traffic, and a few starts and stops owing to the phone calls I had to attend. Taking all that into consideration, a real world fuel efficiency of 40-45kmpl should not be a problem at all with one aboard. 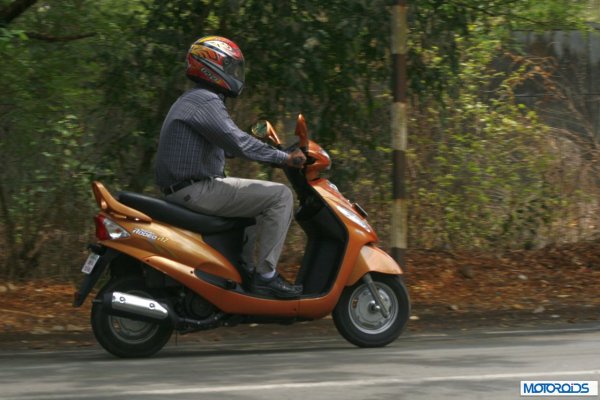 Handling and ride quality is good, and the twin telescopic front suspension helps a lot. Though hard braking induces a judder in the handlebars. Here we have our very own Deepak Dongre checking out the dynamics of the scoot.

The 125cc engine powering the new Rodeo RZ produces peak power of 8 bhp at 7000 rpm and peak torque of 9Nm at 5500rpm. While those numbers may not be class leading, Mahindra still believe that the Rodeo RZ is the best accelerating machine out there –the 125cc Suzuki Swish included. The company gave us some performance figures as a part of the media kit. This included what apparently was the chassis dyno test of various scooters where the Rodeo managed to ace the peppy Swish by .05 secs with a 0-60km/h timing of 9.35 seconds. The 100cc Activa, according to the company figures, was a distant third with a timing of 11.6 seconds.

While we cannot endorse those figures since we did not conduct those tests, we know one thing for sure – the Rodeo does accelerate well. The scooter, the only offering in its class with a fully digital instrument console comes with a unique feature. It lets you time yourself for a 0-50km/h dash. I did, and the scoot consistently managed to haul my overfed body weighing 98kg to 50 km/h from a standstill in 5.9 seconds. Now the 50km/h here was the speedo indicated speed with good chances of calibration issues, but the scooter still felt powerful enough, and those numbers are impressive to say the least. 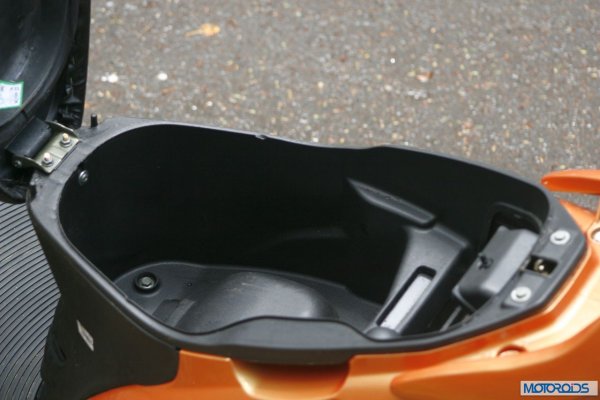 Rodeo RZ leads the scooter segment in terms of underseat storage. It’s illuminated, so no groping in the dark ever for articles.

The 125cc engine, although not a leader on the paper (even the 100cc Activa has the same power), is a delight in practice. It revs freely, packs good punch and is silky smooth even at higher revs. Complimenting the engine perfectly is the Variomatic auto transmission which shifts ratios seamlessly. Even with a pillion aboard (combined weight of about 180kg) the Rodeo did not pant, splutter or stutter. We pulled from a standstill without wringing the throttle fully, and the engine built revs nicely, bringing its 9 Nm of torque into play to good effect. The good thing was, unlike some other smaller scoots which become overly noisy and wheezy while pulling heavy load from a standstill, the Rodeo felt reassuring and unperturbed.

While the acceleration of the scooter is impressive, the same isn’t entirely true about the deceleration. Even with its sturdy chassis, twin telescopic front forks and an overall taut setup, the Rodeo feels a bit nervous under hard braking. There is a mild, but unsettling judder at the handlebars when you brake hard. Having said that, we should appreciate the Rodeo for its rather sharp braking, especially keeping into mind the fact that it’s reined in by a pair of drum brakes. The MRF Nylogrips doing duty up front and at the rear didn’t leave us with much to complain about, especially from a commuter’s perspective, though us being relatively aggressive riders, more grip is always welcome. 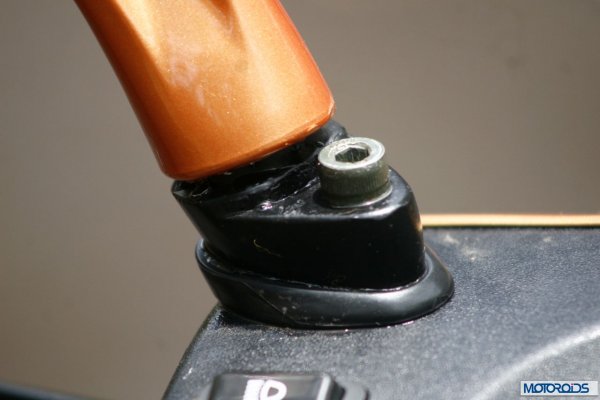 The finish on areas such as this isn’t too great. The entire RVM unit moves from its base, a little difficult to adjust sometimes.

Interestingly, the Rodeo comes with a digital tacho unit, which we reckon isn’t of much use since it’s an auto. It complements the sporty character of the scoot though, and should come handy for those who wouldn’t spare even a scooter from those drag races, hunting for that perfect launch to squeeze in that tenth part of a second. The tacho is marked all the way up to 12000 rpm. I tried my bit and could never see the digital rev counter going above 6 kays. Talk of optimism!
At Motoroids, we had the earlier version of the Rodeo as our long term bike for a while. The fact helped us getting familiar with the vices and virtues of the scoot rather well. We’d like to laud the blokes at Mahindra for having taken the feedback from people like us positively and making changes which were really required. The first of these is an increased ground clearance. The center stand on the earlier vehicle played spoilsport with the handling of the machine every time you tried to lean it into corners – scraping the tar and forcing you to try and sit the bike up quickly, a situation which may lead to accidents in some cases. The issue has been resolved in the RZ variant. The scooter now has a better ground clearance of 154 mm by virtue of modifications made to the center stand. 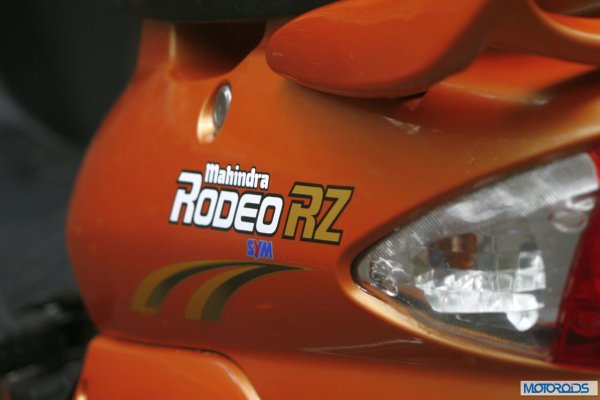 We also reported that the fuel gauge on the earlier Rodeo had a tendency to show more fuel than in store. Apparently, this issue has also been resolved by virtue of a new, patented pressure sensor for more accurate fuel level indication. We saw the level on the fuel gauge drop a notch after riding for a few tens of kilometers. The tanks were filled to the brim when we took the bikes, meaning the fuel gauge wasn’t being overly optimistic anymore.

Apart from its punchy engine, rugged suspension and taut setup for enjoyable handling, the Rodeo has a few other tricks up its sleeve too. The digital instrument console changes colors in the night as you ride. From an angry red to a girly pink, there are as many as seven colors which dutifully keep switching positions to illuminate the funky console. Apart from that, the Duro boasts of the biggest underseat storage of 24 liters which can easily accommodate a full-face helmet, and then some. There is a useful open storage space below the ignition slot too – you can pop in your papers, keys or wallet there. It really adds a lot of convenience in the real world. Then you have the mobile charging point to save you from a drained out phone battery or to power your music player. You won’t probably use it too often, but you’ll surely thank Mahindra for the feature whenever you do. Then you have the unique front fuelling lid for convenience while refueling and ‘side stand engaged’ buzzer to avert any untowardly incident. 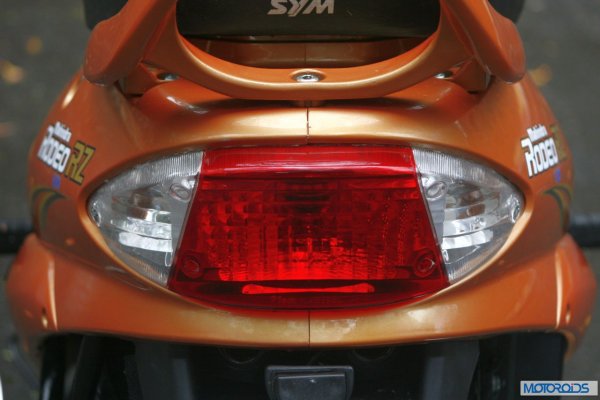 Time to mention a few not-so-good things then. Even with all its virtues, the funky instrument cluster, the smooth, peppy engine and the slick handling, the Rodeo doesn’t impress too much with its plastic quality. Pop open the seat and the plastic that you witness doesn’t appear to be that of a very good quality. There is a rough, uncouth feel to it, with unfinished edges clearly visible on the ends. The hinge for the seat feels flimsy. The painted body panels too aren’t very well finished and inconsistencies could be witnessed easily where the panels join.  Similarly, the quality of black plastic around the instrument console and the switchgear isn’t the best out there. We sincerely think that this is one area where these Mahindra scoots can improve, giving themselves a chance of winning more customers. Also, the new orange shade has an overly dull feel about it. It looks somewhat faded and worn out right from the time the scoot rolls out of the showroom. 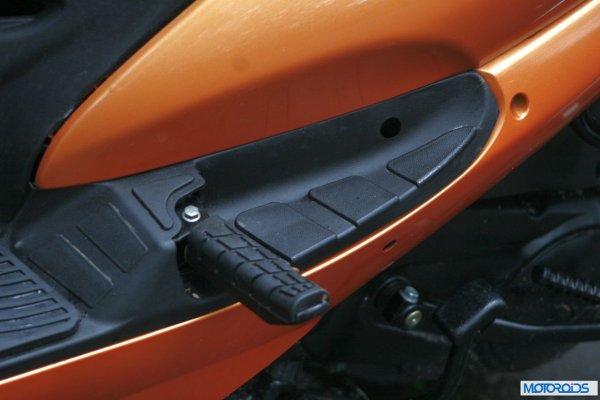 Footpegs for the pillion rider are conveniently positioned. There is a nice recess to rest your heels too.

The price for the Rodeo RZ has not been announced yet, but it shouldn’t be too off from the earlier version’s ex-showroom tag of approximately Rs 44000. At that point, it’s about Rs 3k cheaper than the Suzuki Swish and about a thousand rupees more expensive than the Activa. With the kind of features and performance on offer, the Rodeo RZ looks like a tempting deal. The only gripes are the average fit-finish and a relatively smaller dealer / service network. Having lived with the machine for a year, we know that it’s built to last, so we wouldn’t doubt the reliability of the thing. The Rodeo RZ indeed makes a lot of sense for someone looking for a fun to ride, stylish scooter without crossing the budget. It sure is one of the strongest contenders across segments – a model worth giving a long, hard thought if you’re willing to buy a scoot! 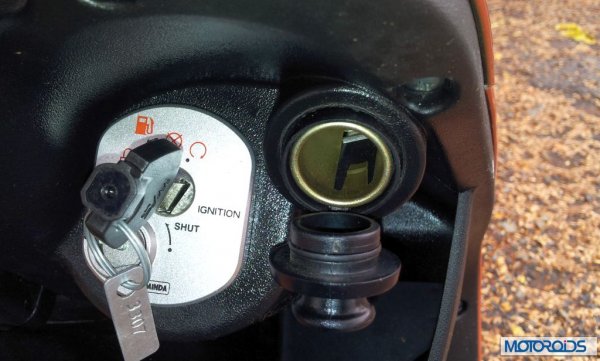 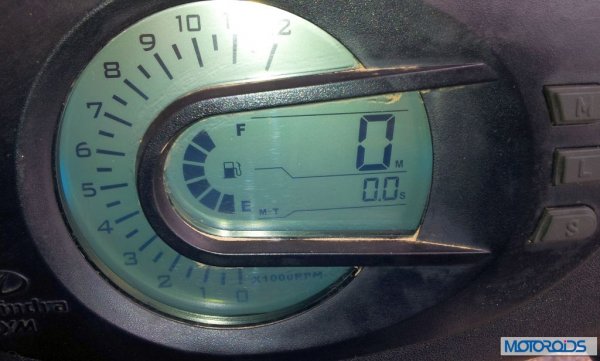 Manual Timing feature of the Rodeo. 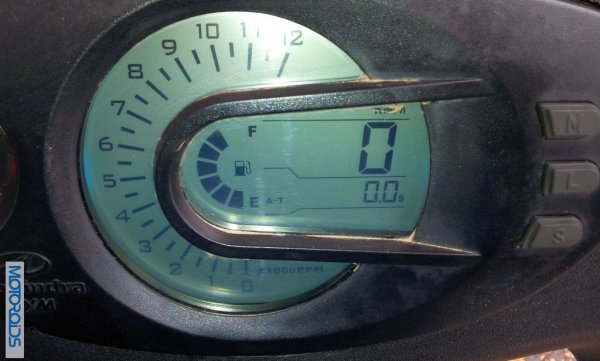 Auto Timing feature of the Rodeo. 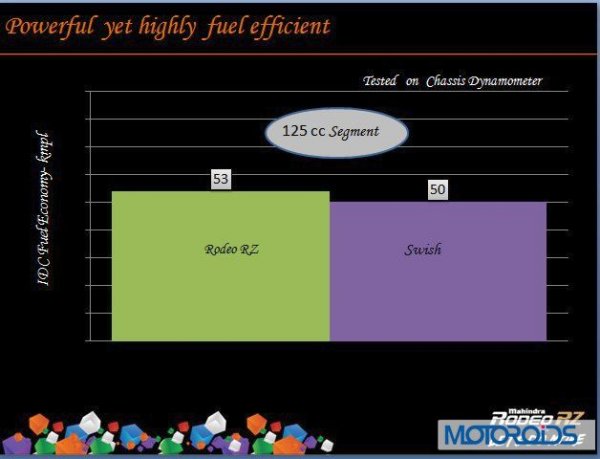 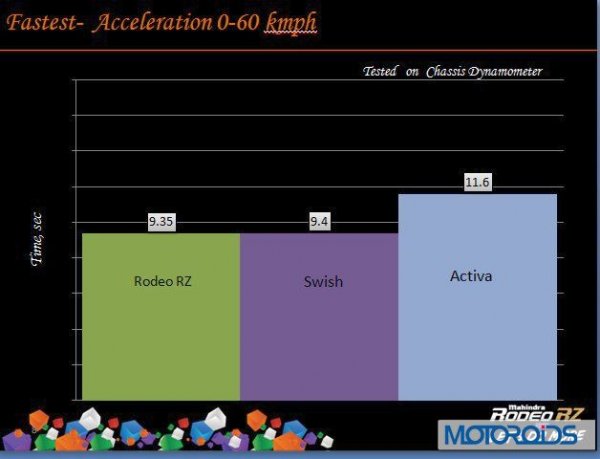 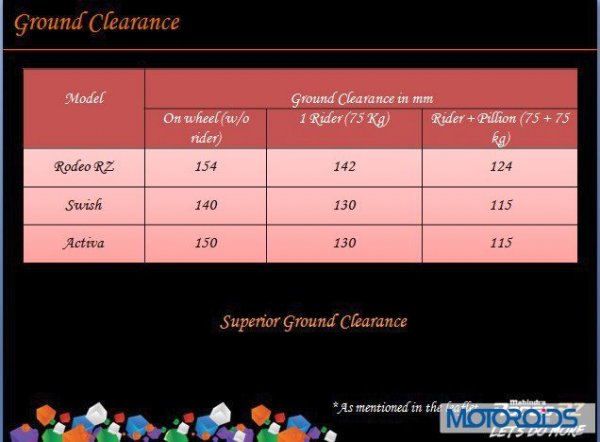 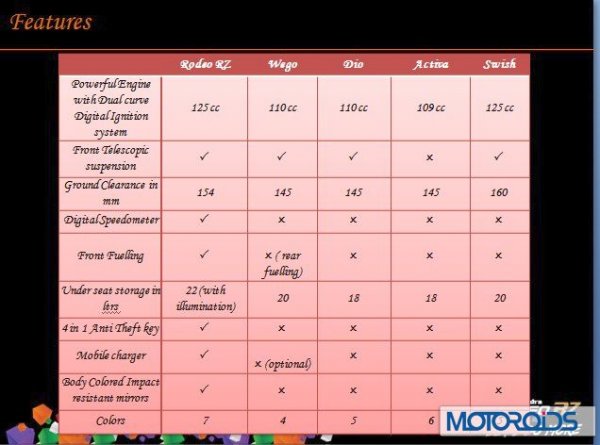 Caption: Some comparison charts, as provided by Mahindra Two Wheelers.