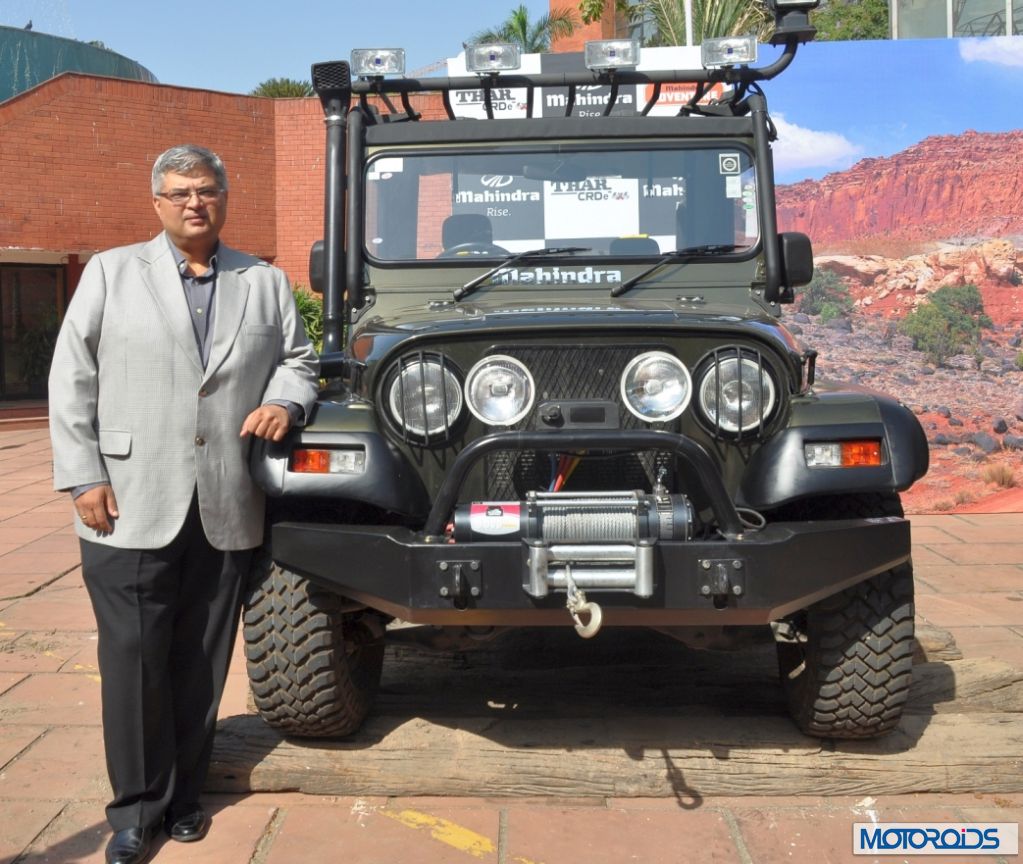 Mahindra & Mahindra Ltd today officially introduced the AC version of their Thar off-roader. We had already informed you about the development a few weeks back when Mahindra updated their Facebook page with the images of the new variant and launched the site for the same. The company, however, has made an official announcement in presence of senior officials only today. The new Thar CRDe 4X4 BS4, with AC is now available at a price of Rs. 6.75 lacs (ex-showroom Mumbai)

The Thar CRDe now comes factory fitted with an air-conditioner/heater. The Thar CRDe also gets a digital immobiliser which safeguards against theft. M&M also unveiled the Thar Expedition, a customized variant of the AC Thar, geared to traverse any terrain. This off-road specific Thar boasts of specialized enhancements such as the custom made front bulbar with an integrated electric winch, rock sliders, snorkel, expedition carrier and roll cage amongst other features, to boost its off-road capability.

Speaking at the launch of the New Cool Thar, Mr. Vivek Nayer, Senior Vice President – Marketing, Automotive Division, Mahindra & Mahindra Ltd. said, “We are always responsive towards evolving customer needs and the launch of the New Cool Thar (AC) is a step towards giving our customers utmost comfort while they navigate through challenging terrains. This further leverages the changing aspirations and lifestyles of the upwardly mobile Indian consumer without compromising on comfort.”

Mahindra also unveiled the Adventure calendar for the upcoming Season. A unique concept to showcase the tough and rugged DNA of Mahindra vehicles, Mahindra Adventure functions as an umbrella brand with a series of adventure and motor sports events under it.  Here’s a snapshot of what Mahindra will be doing with their Adventure initiative for the rest of the year. 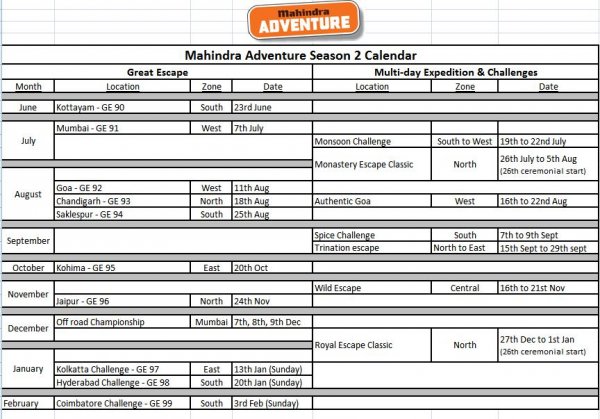 Starting June, Mahindra Adventure will unleash a series of events throughout the year which can broadly be categorized as:

In addition to last year’s multi-day escapes, such as the Monastery Escape (10 days) & Royal New Year Escape (6 days) one can also experience the Tri-Nation Escape (Bhutan, India & Nepal- 14 days), Authentic Goa (6 days) & Wildlife Escape (6 days). These multi-day escapes celebrate incredible India and the sub-continent by traversing to exotic and unexplored locations, thereby bringing the concept of ‘Adventure/Driving experience’ to a larger audience. Like in Season 1, those who do not own Mahindra vehicles can also participate in these events, thanks to a well kept ‘adventure-ready’ fleet of vehicles, at a nominal fee.

The Mahindra Adventure team has stormed into the motor sports arena by teaming with three times National Champion and APRC (Asia Pacific Rally Championship) winning driver, Gaurav Gill and INRC (Indian National Rally Championship) winning driver, Lohitt Urs. Recently it has also signed on the well known rally driver Sunny Sidhu, to further consolidate its position in the motor sport space. Having swept all top positions in Dakshin Dare Rally 2012, the team is all set to enter official teams in some of India’s most popular motorsport events including Mughal Rally, Raid de Himalaya and Dessert Storm amongst others.

Also new is the concept of an all-India off-road championship in the form of ‘Off-Roading Trophy’. Great Escape participants who opt for the Trophy will be judged and selected to participate in this ultimate off-road challenge.

Today the popularity of Mahindra Adventure can be gauged by its fan base on Facebook which has crossed 6.3 lakhs. To further strengthen its dominance in the digital space the Mahindra Adventure team has unveiled their e-magazine, ‘Get Lost’, India’s first digital magazine on Adventure.

Speaking on the occasion, Mr. Vivek Nayer, Senior Vice President – Marketing, Automotive Division, Mahindra & Mahindra Ltd. said, “After the successful run of Mahindra Adventure Season 1, we are all geared to unveil the new season that promises even more thrills for the adventure seeker. The ‘Off-Roading Trophy’ and international events make the Season 2 even more exciting and will go a long way in showcasing the tough and rugged capability of our range of vehicles’.