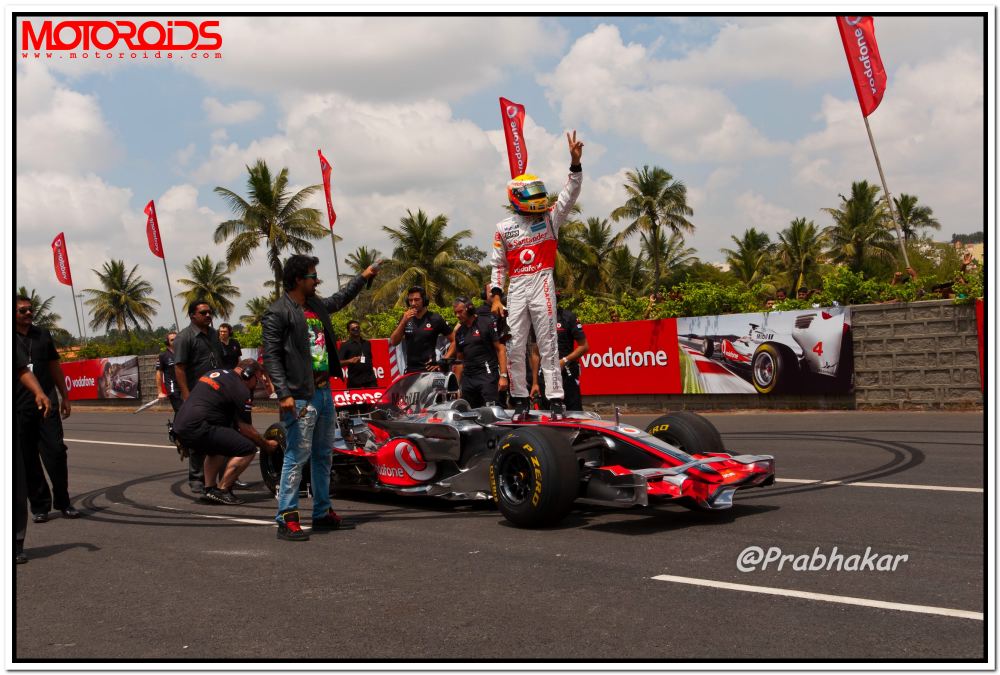 What happens when you fall in love with someone, you just can’t resist staying away from that person, right. The same happens when you start loving a place. But I am not really sure, whats the case with our dear Lewis Hamilton. Either he has fallen in love with the place or maybe Vodafone has become over-generous. Whatever the reason be, we get to witness Lewis live in action(car-driving, of course) and a few lucky ones get a ride with him too.  27th September 2011, exactly after a time of 1 year and 10 days and some 350-odd kays away from the racetrack he visited last year, Lewis pays India another visit, his 4th in-fact. The Press Release in my hand says that Hamilton performed in front of more than 5000 die-hard enthusiasts. I am not sure about the ‘die-hard enthusiasts’ thing(since this would be an understatement)  but yes, the figure of 5000 is very much correct. The event saw a large number of people coming to a place which is nearly an hour away from Bangalore city.  The event kicked off with Hamilton driving his 2008 Formula1 car, the MP4-23. The sound of an F1 engine is good enough to set one’s pulse racing. And could there be a better way to start a show than this! He then drove the SL-AMG and ultimately the C63-AMG, before taking out the F1 car again for another spin. And by spin, I mean a literal spin. Donuts and Burnouts is something we all witness, sometimes in the races and sometimes in other promotional events. What we don’t get to see is an F1 car going sideways(for a short amount of time, though) on opposite lock.   Since there was a huge crowd, there were security issues. Police was there for the whole event and eventually they had to intervene by chasing away the crowd. Amidst all the tension, the show was successful indeed. During the press conference, Hamilton made it clear that he wasn’t very keen on moving to RedBull. He also shared the fact that he loves Indian food, especially Chicken Tikka. He said that a lot of dedication is needed for the sport, and it would be great if he sees the same enthusiasm in the crowd during the Indian GP too.  Yes Lewis, you can stay assured, the crowd will be wilder and bigger, of course. And yeah I forgot to ask him, why no Nicole this time too?

The event was good to a certain extent.
However the organizers failed miserably when it comes to certain aspects.
This hampered the overall feel of the event.
Lapses which were noticed –

1.    Entry was crowded with no one to manage them & every one tried to enter.
2.    Major safety hazard of people invading the track area – people crossed the barricades.
3.    The Police and security were no where seen and are very less in number.
4.    People thronged in from the other side of the track by climbing a wall which was not barricaded.
5.    The temporary stands were not safe enough.
6.    The Road was too narrow and small for a F1 car.
Official Press Statement

Vodafone today organized a formula one car run on India roads in front of more than 10000 enthusiasts in Bangalore. Lewis Hamilton drove his MP4-23, the car which raced him to the 2008 Drivers’ World Championship in front of his fans and Vodafone customers in Nice Road, near Bengaluru. Some lucky customers got the privilege of hot laps with Lewis and also visiting the pit garage to see the technology behind the team.

MTV VJ Ran Vijay played host to the speed fest. Lewis Hamilton also interacted with the finalists of the on-going Vodafone Race to Fame contest which is giving them a chance to join the team and live the weekend of their lives during the race weekend of the Indian Grand Prix.

Having driven his formula one car for the first time on Indian roads, the 26 year old Lewis Hamilton said, “I’ve visited India many times over the last couple of years and it’s never been more exciting to be here than now: the inaugural Indian Grand Prix is only weeks away and you can really feel the growing passion of the people and the excitement levels continuing to build. Vodafone has been supporting our team and Formula 1 for many years and they’ve always brought grand prix racing to the people: getting to drive my Vodafone McLaren Mercedes F1 car on India’s public roads today was an incredible experience and I really hope it gave people a taste for the incredible spectacle of Formula 1.”

Vodafone has been the Title Partner and Official Mobile Partner of the Vodafone McLaren Mercedes team since 2007. VMM is one of the most successful teams in Formula One, having won four consecutive Drivers’ and Constructors’ Championships (1988 – 1991) and secured eight Constructors’ World Championship titles.

Vodafone Race to Fame is a unique and innovative engagement platform, which includes a host of activities. This initiative includes two different challenges ‘Vodafone Race to Fame- Life in the fast lane’ where lucky winners will get ‘a-money-can’t-buy’ experience, to live the weekend of their lives with the Vodafone McLaren Mercedes team during the Indian Grand Prix to be held at Noida on the 28th-30th October 2011. The ‘Vodafone Drive into the Big League’extends an opportunity to small & medium enterprises (SME’s) to have their logo on the Vodafone McLaren Mercedes cars that will race at the motor racing event in India.. Vodafone Drive in the Big League has received an overwhelming response and there have been more than 50,000 entries received from prospective small and medium business enterprises. The winners for both these contests will be announced by Vodafone McLaren Mercedes team on the eve of the motor racing weekend next month.

Here we have some pictures from the event More to follow soon!