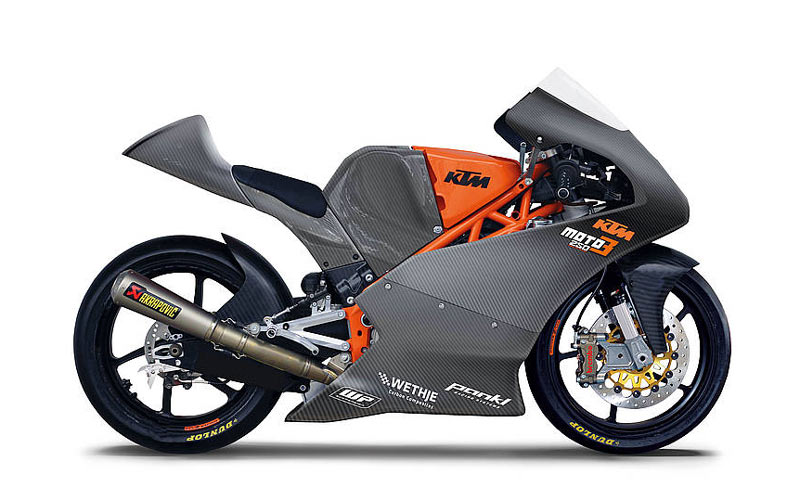 KTM is all geared up for giving the common public a taste of what MotoGP tech feels like on public roads. The Austrian bike maker, with a majority stake holding by Bajaj has announced that a production version of its Moto3 racer will be made available to the common folks in 2013. The approximate pricing for the machine in Europe would be around Rs 30 lakh.

The production bike will produce an astounding 50PS from its puny 250cc single cylinder engine. With its ultra light dry weight of 83kg, it should be an absolute scorcher. Equipped with Dunlop 95/70-17 and 115/70-17 rubber front / rear respectively, the bike will be reined in by Powerful 290 / 190 radial caliper Brembo dics.
As goes without saying, the machine developed and produced for street use would differ slightly from its track going iteration. Extreme weight cutting measures on the race going motorcycle will be watered down to bring the costs within control. The magnesium wheels on the race machine will be replaced with cheaper aluminium units. Brakes and suspension would also be altered for longevity and cost reduction. The maximum engine speed would be brought down by 4000 revs to 13,500 as against the 14,000 rpm of the factory machine ridden by Danny Kent and Sandro Cortese.

Order book for the rare machine is open now, and would remain so until October 2012. First deliveries are are expected by Feb 2013. Here we have the key specs of the machine for you.