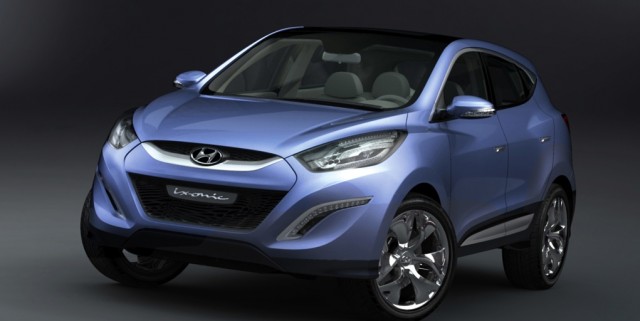 The Compact SUV has to be the fastest emerging segments of recent times. Ford is almost ready with its Ecosport and there has been news of Chevy and other manufacturers readying their product for the upcoming war. The recent news is that popular Korean auto manufacturer Hyundai too is gearing up to develop an all-new small SU.

The new car will be built on an all-new light-car-sized B-segment platform at Brazil- the first market for the Hyundai compact SUV. Hyundai’s director of global public relations, Frank Ahrens said,“We’re going to start with a little five-door hatch – we’re codenaming it HB – then there’ll be a four-door sedan, same B-segment, and then there’ll be a little SUV. It’s pretty cute, I have to say, and it’s smaller than Tucson [ix35].If that works there – and I think it will be pretty popular in Latin America – we’ll export it throughout Latin America and take a look at other markets around the world.It will have the same high safety crash standards,” he said. “It will have surprising amenities that you don’t expect. We don’t want our features to be just in the highest model, we want them to be in the bottom.So, no, it will be as good as a Sonata [i45] only in its own class, I can guarantee that, because the truth of it is if you want to raise your brand you’ve got to raise every car in your brand.”

Hyundai Motor Europe’s Senior Vice President Allan Rushforth said that he is looking at the prospect of having a B-segment SUV for the European market.“I was reviewing a proposal on Monday before I left, so we’re very much in the thought process around B-segment SUVs,” It’s a segment that will develop… You’ve got Nissan Juke in there at the moment, Skoda Yeti, and then there’s probably three new products next year, so it’ll develop. At the moment we have [Kia] Venga and the ix20 which are … very similar B-segment MPVs in two brands, and then there’s an emerging B-segment SUV. I think, ‘What’s the product going to look like that sort of spans that segment?’ That’s the consideration we’re having at the moment, and that could result in just about anything.If you can offer people a stylish B-segment SUV with more utility, I think that’s probably where the real mass of the market is.”

Hyundai ix-onic concept (pictured) hinted at a sub-compact SUV at 2009 Geneva motor show and we also saw the Hyundai Hexa Space at the Delhi Auto show this year. It will be interesting to see how Hyundai’s compact SUV looks like.