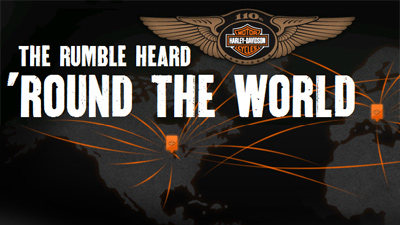 Harley Davidson, arguably the most iconic bike maker in the world, is looking all set to launch its 110th Anniversary celebration with two groups of Harley bikes ready for some globetrotting. While one of the groups will head to tame the highways of west American plains, the other will have a rendezvous with the plateaus in China. These two rides will be followed by numerous other rides that will happen during the year long celebrations.

Mark-Hans Richer, HD CMO states, “Harley-Davidson’s 110th Anniversary year is about celebrating the experiences of riding and inviting all to join in on the good times, in ways and places our founders couldn’t have imagined. Our 110th Anniversary year starts tomorrow with journeys on two continents. The first with a group of riders who’ve never before experienced the adventure of Sturgis, and the other is on the opposite side of the world with a group of enthusiasts riding in China across the Tibetan Plateau.”

One of the above two groups embarks on a journey to South Dakota and experience the famous ‘Sturgis Motorcycle Rally’ for the first time.

Richer states, “This kick-off marks how Harley-Davidson will celebrate our 110th Anniversary, through our riders and our fans around the world, and everyone is invited to join in on the rides to Sturgis and the Tibetan Plateau on our new 110th Anniversary Web site, www.h-d.com/110.” The official Harley Davidson Anniversary Celebrations will be held in Rome on June 13-16, 2013, and in Milwaukee, Aug. 29-Sept. 1, 2013.