Home News Four Volkswagen Up! concepts to be present at the Geneva Motor Show 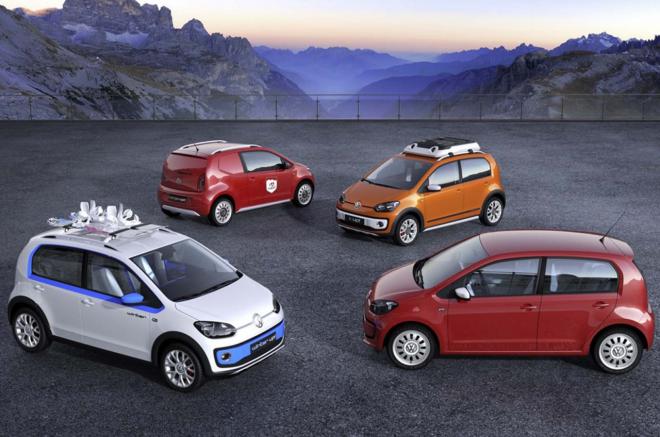 Volkswagen will be seen present with four concepts based on the recently unveiled Up! at the upcoming Geneva Motor Show. These four concepts will portray that the Up! is not just another compact. Here we report about the concepts that VW will be having on display at the motor show:

This concept speaks of Volkswagen’s respect for the country that hosts the Geneva Motor Show. The four-door Swiss Up! will be seen wearing the colors of the Swiiss flag- tornado red and white porcelain . On the inside, you get ceramic colored leather upholstery with incorporates pockets for Swiss Army Knives.

The Winter Up! Concept again is based on the four door Up! and comes with a roof mounted snowboard holder. The car is painted in a shade of malibu blue and pure white with matching interior color.

Like the Winter Up!, the X Up! Concept is based on the Cross Up! and has a roof box with additional search lights. The car also has rugged side panels that should protect the body working when the terrain gets rough. The car gets burned orange metallic shade of paint with chrome accents around the search lights.

The fourth concept comes with additional luggage space and comes with the kind of kit you would require to deliver Pizza. This concept again is based on the Cross Up! and the passenger seats have been shown the door to have a flat bed floor. The extra luggage space in form of closeable bins means that the luggage area has been increased from 951 liters to 1,400 liters in this concept. On the outside, the car gets red tornado livery with dark tints on the windows.