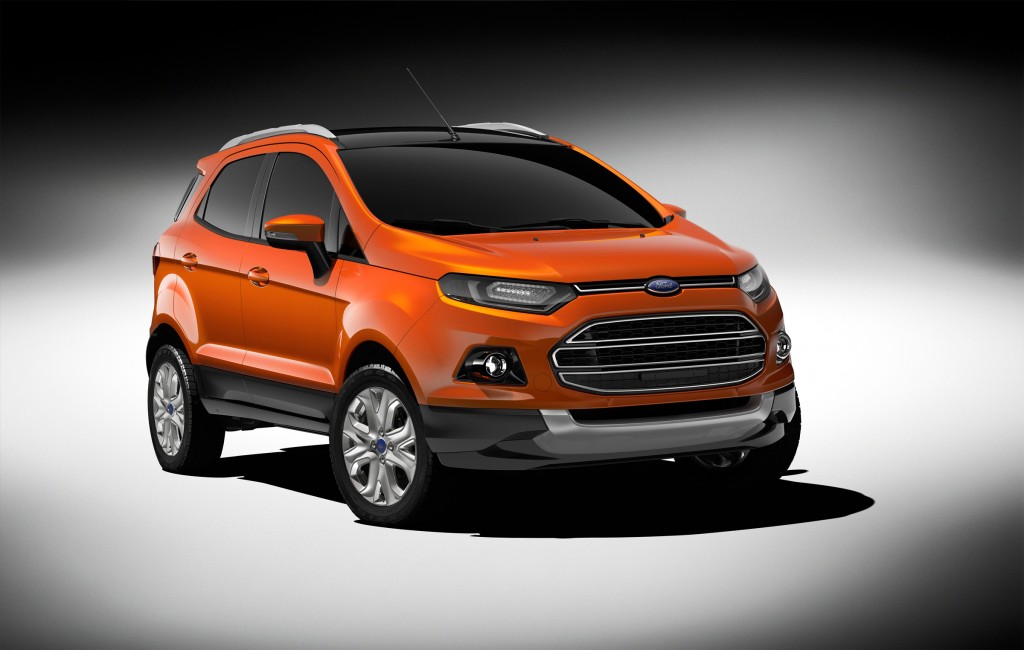 We just attended the Ford Ecosport unveiling ceremony in New Delhi. The event was held at the same place where Figo was unveiled a few years ago. Alan Mullaly, global CEO, Ford, himself was there for unveiling of the vehicle. That alone shows how serious Ford is for their Ecosport. With this car, Ford’s Ecoboost engine debuts in India and the new Ford enters into market with the 3 cylinder, 1.0 liter Ecoboost turbo petrol engine. This simply means that the Ecosport will have 120ps of power and 170 nm of torque at its disposal with its force inducted engine. 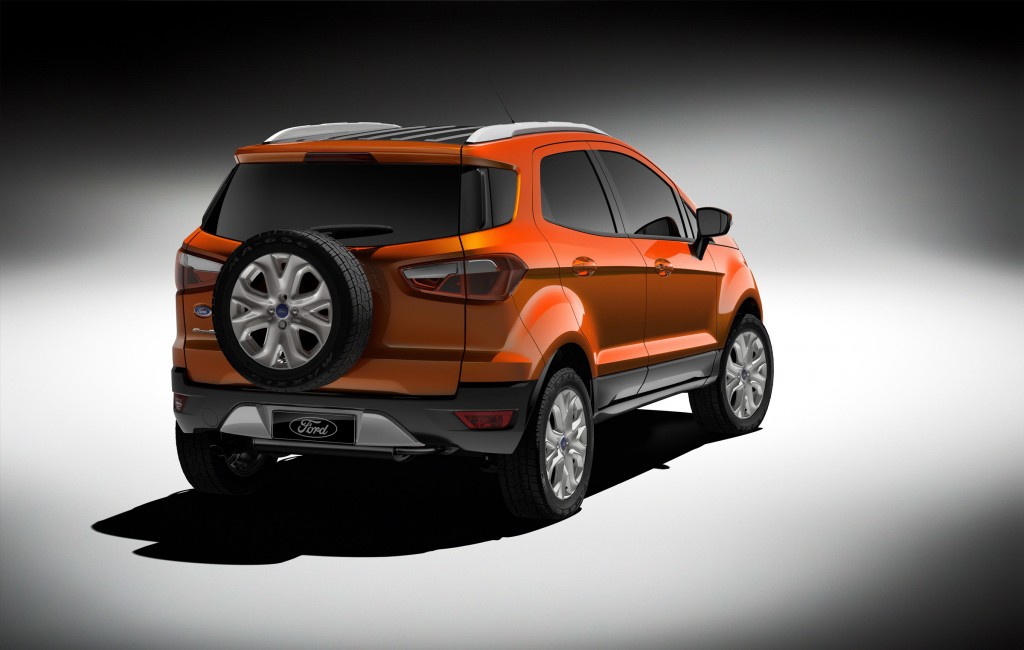 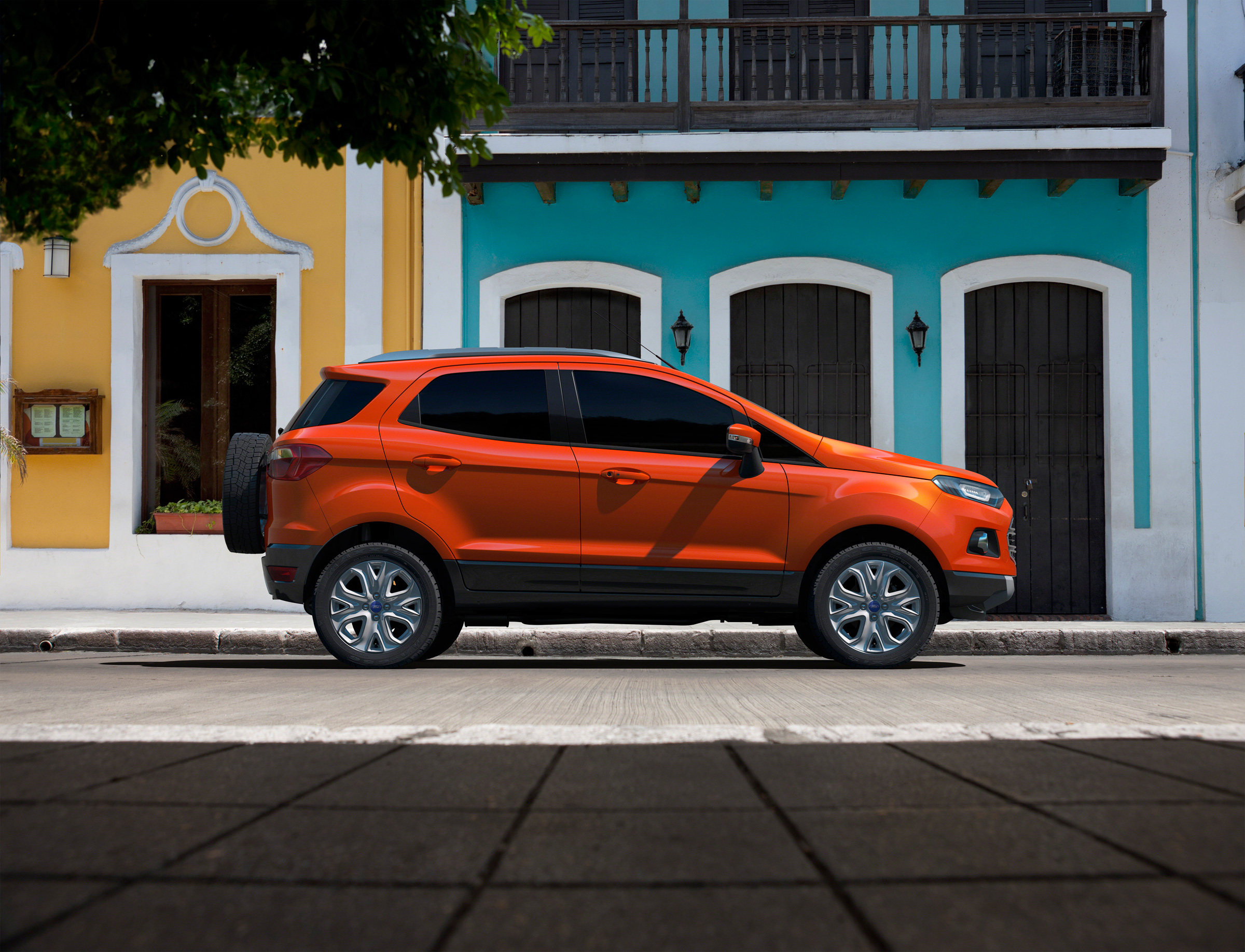 The mantra for ford behind the design of the Ecosport was to ‘Mix just the right amount of robust capability and confident stance with a friendly, outgoing spirit’. The new model will eventually be sold in nearly 100 markets around the world. The EcoSport has a contemporary shape and sports key SUV cues such as a confident stance, and signature spare wheel mounted on a swing-gate at the rear of the vehicle. Its footprint is small enough for the city, yet it’s strong and rugged enough for trips to the mountains or countryside.

Shaped by Ford’s new global design language, the Ecosport combines the agility and practicality of a compact car with high ground clearance. A wide hood sweeps into sculpted bodylines, and has a refined surface language that suggests honed strength and a dynamic spirit of energy in motion. Modern, oblique headlamps frame a high-mounted trapezoidal grille which gives the vehicle an element of pride and a signature Ford face.

The windshield is steeply raked, and blacked out B-pillars unify the side glass into one elegant shape, conveying a clean, modern profile, complementing a shape honed in the wind tunnel for efficiency. 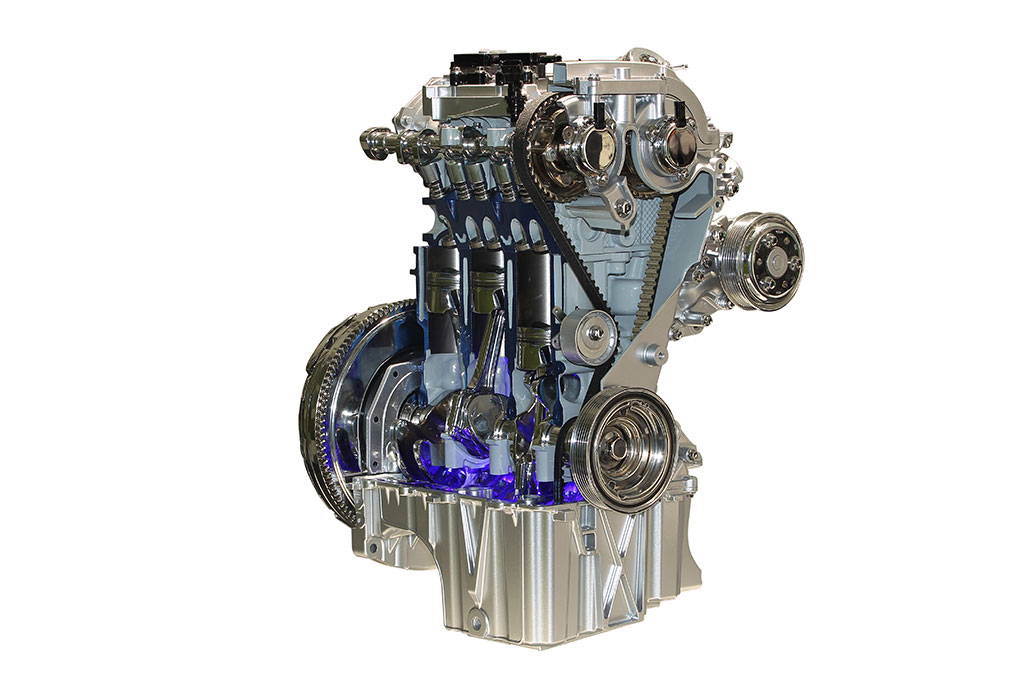 Despite its small capacity and proportions, the engine delivers power and performance that will rival a traditional 1.6-litre petrol engine while emitting less than 140g/km CO2. It will have 120 PS of power and be mated to a five-speed manual transmission, giving the Ford EcoSport a footprint that is small enough for urban driving yet robust enough for a trip out of the city.

The new 1.0-litre is the latest addition to Ford’s global family of EcoBoost engines, which currently range in capacity from 1.6 to 3.5 litres. Downsized EcoBoost engines feature turbocharging, direct injection and other technologies and replace larger engines with no loss of performance and with lower fuel consumption.

Ultimately, this all-new engine will be made available in Ford models in China, Europe, North America and other regions.

“The 1.0-litre EcoBoost delivers great low-speed responsiveness, power, torque and smoothness. To produce an engine with such impressive performance and fuel economy clearly reflects our commitment to be class-leading in fuel economy around the world.” 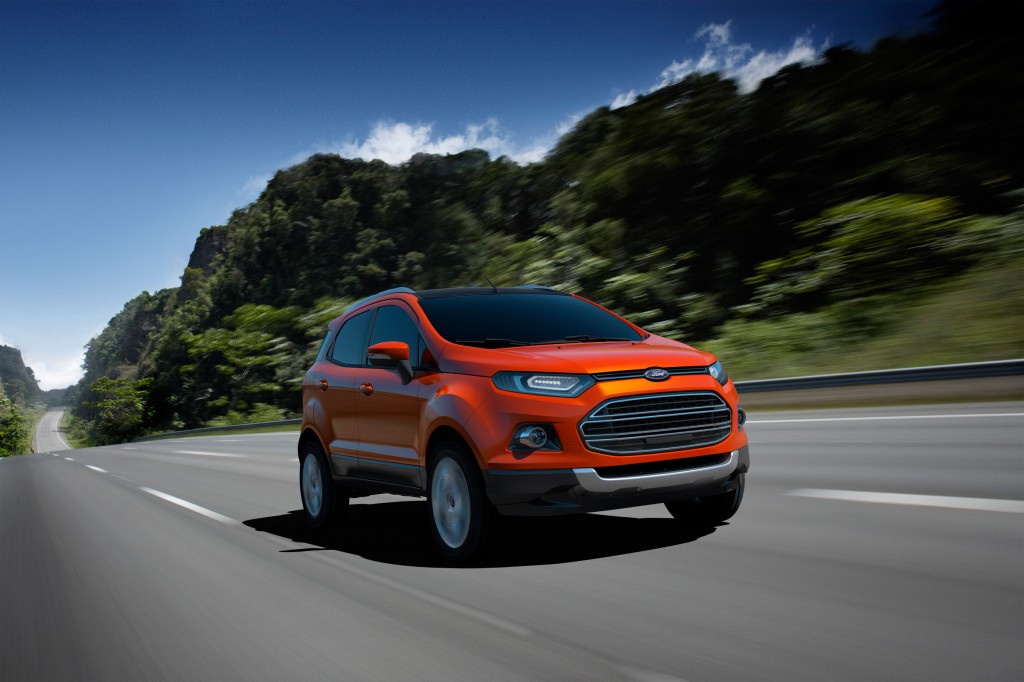 Developed at Ford’s Dunton Technical Centre in the U.K., this direct-injected EcoBoost engine features a new compact, high performance turbocharger design. The extremely fast response of the turbocharger and its ability to reach nearly 250,000 rpm results in virtually no turbo lag and peak torque of 170 Nm from 1,300-4,500 rpm.

The all-new EcoBoost engine also features an exhaust manifold cast into the cylinder head, which lowers the temperature of the exhaust gases and in turn enables the engine to run with the optimum fuel-to-air ratio across a wider rev band.

An advanced “split cooling” system reduces fuel consumption by warming the engine more quickly and – unique to the 1.0 engine – cast iron has been selected for the block, reducing the amount of energy needed for warm-up by up to 50 percent compared with aluminium.

Intelligent ancillaries such as a variable air-conditioning compressor and oil pump also reduce demand on the engine – improving economy and emissions – while special coatings for engine components and intricate development of engine geometry result in minimal frictional losses.

Like its larger-capacity siblings, the 1.0-litre EcoBoost engine will use twin independent variable camshaft timing (Ti-VCT) to further improve performance and economy. Ford has also employed an all-new camshaft actuator to speed up response times without sacrificing durability.

In the all-new 1.0-litre Ford EcoBoost engine, the emphasis in development has been on delivering both smooth and refined performance.

Engine refinement is improved thanks to an innovative design that immerses the two main engine drive belts in oil – resulting in quieter and more efficient running but with the durability of a chain. Careful attention has also been paid to mitigating the natural vibrations of the three-cylinder design.

Rather than employ the traditional method of adding energy-draining balancer shafts, Ford engineers have deliberately “unbalanced” the flywheel and pulley to offset the engine configuration. Ford believes these innovations combined with optimised engine mounts will deliver a truly refined performance feel perfected during 720,000 kilometres of tests – including 360,000 kilometres of durability trials and 10,000 kilometres of environmental testing.

“Fitted with a long list of innovative technologies, the 1.0-litre EcoBoost is one of the most technically advanced and efficient engines Ford has ever designed and produced,” said Bakaj. “This new engine demonstrates Ford’s laser focus on improving fuel economy without compromising performance. It will be an engine that not only surprises and delights our customers but also offers them great value in the lower cost of ownership.”

Here’s the image gallery of the new Ford Ecosport