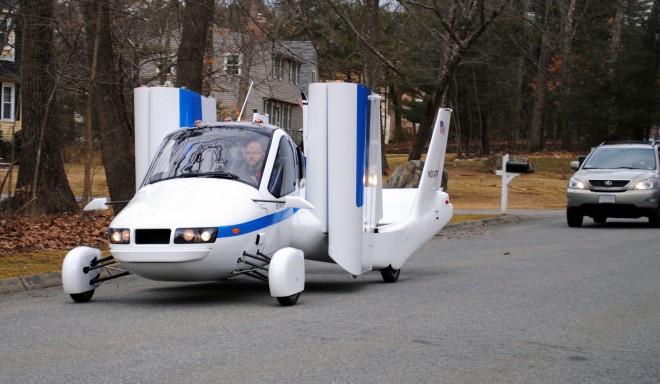 Man has always been fascinated by taking to the skies. Flying cars have been a part of many a futuristic TV series and comic books. Now, the recent news is that a flying car will be seen at the upcoming New York International Auto Show. Named as the Terrafugia Transition, this car is essentially a two-seater aircraft that has a set of foldable wings and four wheels. The Massachusetts based manufacturer calls its creation as a “roadable aircraft” and also as a “street legal airplane.” We, however, call this creation a flying car.

The manufacturer has been getting orders for this car and says, “We’ve noticed in our order backlog there are actually a fair number of people who are not currently pilots who are putting deposits down to order a Transition.”

The company is headed to New York Auto Show to try to gauge the exact interest people have in a flying car for non-pilots.

Now, the problem that this car faces is the positioning. The Transition is neither a great aircraft nor a great car. The manufacturer feels that the marketplace for the flying car might be people who have a long road commute or a short flight requirement.

“If you’re flying 1,000 nautical miles, you’re probably going to want a higher performance aircraft” the manufacturer says. “But if you’re flying 100, 200 or 300 miles, this might be ideal.”

The flying car costs $279,000 car and let us not think about the cost of spares for this.