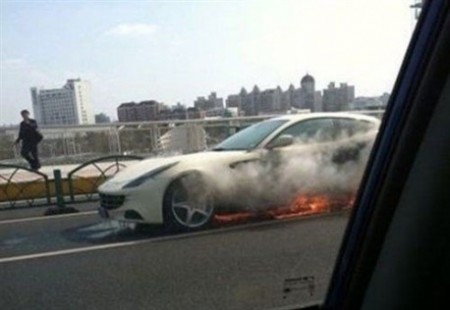 Now, if you think that Tata Nano is the only car that is catching fire these days then you are in for a surprise. Ferrari’s latest and very popular supercar, the FF, recently caught fire in Shanghai, China. It is being said that the car was doing city speeds on Shi Bo Avenue before the car’s underbody was seen engulfed in smoke. Thanks to other road users warning the driver, the driver quickly managed to come out of the car. In no time, the smoke was seen being replaced by flames and thanks to the extinguishers, the entire car was saved from being totally engulfed in fire. Ferrari officials have started investigating the case. However, many are saying that it was the slow speed of the car that caused the exhaust pipes to overheat and catch fire.