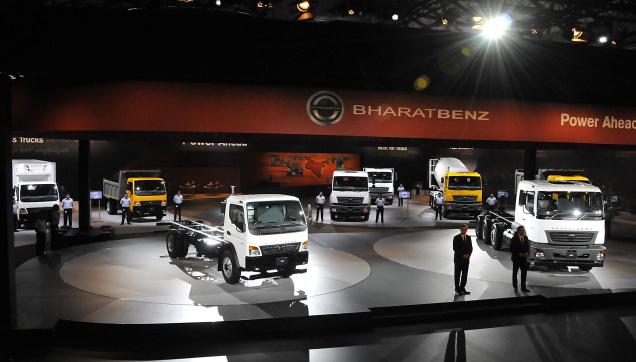 We were among the first few to report about Daimler AG’s Indian operations. Now the news is that Daimler India Commercial Vehicles (DICV) recently unveiled a new line up of trucks for Indian market. Christened as the Bharat Benz, the brand is dedicated exclusively to our Indian market.At the premiere in Hyderabad, DICV chief executive officer and managing director Marc Llistosella said, “We will start our market launch during September with the introduction of three models, followed by the launch of 17 models covering the entire spectrum – starting from 6-tonnage light commercial vehicles to up to 49-tonne heavy-duty trucks – over the next 20 months.”

“The genesis of these new products is the return. The BharatBenz range is 85 per cent localised to stay price-competitive. We roughly have 400 suppliers, with 41 per cent of the total value coming from within a 50-kilometre radius of Tamil Nadu,” he said, also saying double digit fuel efficiency.Daimler has tied up with banks and commercial vehicle financiers like HDFC, ICICI Bank and Sundaram Finance. Llistosella also added that DICV is not looking to grab a lot market share quickly. “Market share is just incidental. We are preparing ourselves to be a significant player in the market.”The Chennai DICV plant has a capacity of 36,000 units in a single shift. However, the plant has been built keeping in mind the need to expand to as much as 70,000 units a year without high investments.Talking about exports, Llistosella said, “If we can do it in India, we can do it anywhere. That (exports) is our target.”