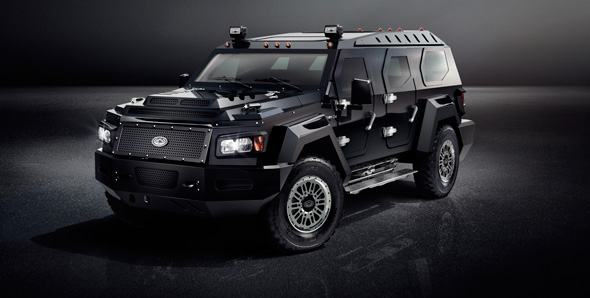 Petite and Hummer are two words that are poles apart from each other. However, throw a badass Conquest in to the picture and suddenly, it all starts making a lot of sense. For those who might not know, Conquest is a Canada based manufacturer of some really sinister armoured vehicles. The good bit about these vehicles is that they can be bought for civilian use in many parts of the world and a Conquest SUV should be right there at the top of you wishlist if you swear by the ‘bad is cool’ mantra.

Conquest Vehicles have now introduced their first un-armoured SUV to the world. Christened as the Evade, the latest from Conquest doesn’t looks any less wicked than the rest of the line up. The Evade will also be seen providing design cues for the next-gen Knight XV, the flagship offering from the manufacturer. Built on a Ford F550 Super Duty chassis, the Evade is largely made up of an aluminium-mild steel blend. Parts like running board, steering wheel, hinges are made of stainless steel. On the inside, the car has 2+2 limousine-style seating with option of either a driver partition or retractable flat screen television. The Evade comes equipped with commercial grade air ride suspension, laptop trays and a third sunroof. Evade SUV comes with both fuel options and with petrol and diesel powertrain options and a 4×4 system. It is priced at Rs 3.19 crores, excluding duties.

“We wanted EVADE to set a new standard for our company in terms of pushing the boundaries from engineering to design to incorporating new user experiences without compromising the integrity of some of the key highlight design features offered by our armored Knight XV,” said the president of the Canadian company William Maizlin.

“The result speaks for itself in terms of the final product and we couldn’t be happier,” he added.

Check out this video to have a look at the best that Conquest has on offer:-